Hillsboro QB is focused on senior season after announcing his college commitment. 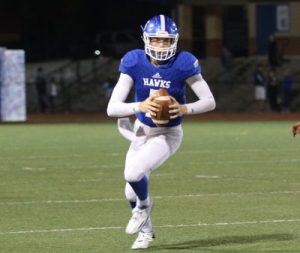 One year after helping lead Hillsboro to an 8-3 record, 2018 quarterback Tyler Isaacson has his mind at ease after making his college decision official and is back after a strong junior season to lead the Hawks.

On July 29, he gave a verbal commitment to Olivet Nazarene University.

“I am a leader on the team. As a quarterback I have to be the one who does everything right,” he said. “I am a reliable playmaker and constant leader for our team and someone the younger guys look up to.

“I bring a hard worker who will show up and do above what is expected. I motivate and am a good player. I make the plays needed and cause big things to happen.”

He says he is working on improving his mechanics and throwing technique in the offseason and currently holds an offer from Olivet Nazarene University and has drawn interest from several schools, including Trinity International, Army West Point and Valparaiso.

A year ago, Isaacson said a key win over Festus was among the team’s biggest games of the season. Festus led 20-0 in the first half only to see Hillsboro come back and win the contest 22-20.

“They are our rivals and they went up 20-0 after the first half because we had three turnovers,” Isaacson said. “Then In the second we started to throw more and came back and won the game … I played terrible in the first half having two fumbles but then had a great second half throwing the ball and mounted a comeback win.”

Expectations are high for Hillsboro this season after putting together a solid season a year ago.

“We were a very good team in my eyes,” Isaacson said. “We had a successful season but we should’ve went farther than we did but we are still happy with what we accomplished. I love Every single person on the team last year and I’m thankful for what everyone did for our season.”

He began playing football at 5-years old at twin city youth football in Festus and then went to Hillsboro when he was in seventh-grade.

Isaacson says his dad has been the biggest influence on his football career to date and says Green Bay Packers QB Aaron Rodgers is his favorite player.