A look at several of the top class of 2023 prospects in the Southwest Region. 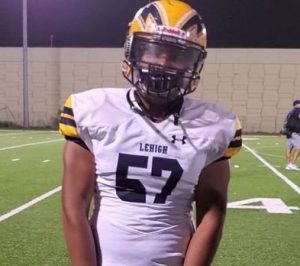 The Southwest Florida Region features several of the state’s top prospects at a variety of positions across the board. With off and on-campus recruiting shut down for the time being, Six Star Football is taking an inside look at the prospects college programs are looking at this offseason.

Here, Six Star Football takes a look at several offensive prospects in the 2023 class to know in the Southwest and Suncoast areas.

Anthony Alcazar, 6’0, 230, OL, 2023, Lehigh @AnthonyAlcazar8 (pictured)
Coming off a strong freshman season for the Lehigh varsity, Anthony Alcazar is entering the upcoming season as one of the southwest Florida region’s top young OL prospects. While listed  at 6’0, 230-pounds, Alcazar plays much bigger, showing the ability to effectively run and pass block last season at right tackle where he used quickness, agility and strong technique to help give his QB a clean pocket and the Lightning backs some room to run on the perimeter. We see Alcazar likely having a future at guard where his physical tools might suit him well.

Anthony Benjamin, 5’8, 160, WR, 2023, Dunbar @Antb2quick
Benjamin is blessed with speed, quickness and the ability to shake a defender in space. He is a big play threat on special teams last season at Dunbar, thrilling fans with big plays in the return game and was a threat on the perimeter at receiver, showing the ability to get behind defenses or take short routes and turn them upfield quickly for big gains. Don’t let his 5’8, 160-pound frame fool you — he plays much bigger and shows potential on the defensive side of the ball in the secondary, able to get off blocks and make tackles in space.

Chauncy Cobb, 5’7, 140, WR/KR, 2023, Clewiston @CobbChauncy
A talented WR and special teams prospect, Clewiston 2023 WR Chauncy Cobb is a threat to take it the distance every time he touches the ball and is poised for a breakout sophomore campaign and plays much bigger than his listed 5’7, 140-pound frame would suggest. He was second on the Tigers as a freshman with 16 catches for 226 yards and a TD. He excels in the underneath game and is able to turn short routes into big gains, setting up blocks and making moves to free himself from defenses.

Matt Depalma, 6’0, 165 , WR, 2023, Out of Door @depalma_matt
A wiery WR prospect in the open field, Depalma is a player that is hard to tackle and likes to get to the outside edge and up the field in a hurry.  One of those players that is a mismatch for most teams he plays against and a guy that can use some good open field vision to make runs and be a key offensive weapon for Out of Door Academy.

Mario Jolicoeur, 5’9, 160, RB/SB, 2023, Golden Gate @jolicoeur_mario
A multi-talented slot back, Golden Gate 2023 Mario Jolicoeur is poised for a breakout campaign in 2020. He is a talented runner, receiver and is a big play threat as a returner on special teams. Listed at 5’9, 160-pounds, Joliceur is a strong athlete who reports a 225 bench, 335 squat and 205 power clean. He can run between the tackles, bounce off tackles and is tough for opposing teams to contain in the open field.

Olsen Patt Henry, 6’4, 190, WR/TE, 2023, FBA @OlsenPatt
A hybrid TE/WR prospect, First Baptist Academy 2023 prospect Olsen Patt Henry has terrific size at 6’4, 190-pounds with good hands, agility and is a mismatch for opponents downfield. He reports a 4.9 40-yard dash, a 32 inch vertical, 215 bench and 335 squat. He has the ability to adjust to the ball in the air, can make big plays downfield and presents a big target for his QB. He is a dangerous threat in the red zone, uses his frame well to shield off defenders and has strong hands. He can also line up tight and help FBA ground and pound as a blocker in the red zone.

Kyle Nemzek, 6’4, 185, OL/TE, 2023, Saint Stephens @LarryNemzek
Nemzek is a player that can do some nice things and one that has a very impressive 6-4, 185 frame.  We like Kyle’s ability to switch over to right tackle after playing TE until the 2019 campaign.  He is a guy that will be one of those very versatile weapons on the offensive side of the ball and a guy that will factor in to make some nice plays in the coming season. Is a player that gets off the ball very well and has the power to push bigger men off the line to make room for running lanes.

Scotty Olian, 5’11, 170, WR/LB, 2023, Bishop Verot @OlianScotty
A relentless worker and a guy that goes till the whistle stops, Olian never gives up on plays and is a very nice contributor from his primary position of DE, Scotty also plays OLB and is a very impressive athlete that runs a 4.75 in the 40 yard dash and reports a 32 inch vertical is 32 and squats and deadlifts 335. Is very quick to the football and a player that moves very well in space and also plays physical and aggressive.

Trey Rutan, 6’0, 160,QB,2023, Lemon Bay @Trey_rutan
A very talented athlete in the class of 23 with an impressive arm, Rutan also is a pitcher for the Lemon Bay baseball team.  He already stands in at an impressive 6-0 and is a player that has one of the better arms in the 23 class of QBs in the area.  Rutan is a player that can make plays on the run and is a scrambler that always seems to find a way to make the play, a cool under pressure QB that can make nice throws and tuck and run with success when pressured.

Lauriel Trotman, 5’8, 145, RB, 2023, Cardinal Mooney @ftf_scootaa
One of the up and coming future big time play makers for Cardinal Mooney, Lauriel is a running back that can do a variety of things very well, one of the better class of 23 running backs that shows nice hands and an ability to split out and give Gibbons another WR option on downs.  Troutman has nice vision and is a guy that is speedy and very hard to get a solid hit on.  Has all the makings of one of the top ‘23 play makers in the area.

Tucker put together a strong freshman season last year for Gateway and despite his diminutive size (Tucker is listed at 5’5, 150-pounds) is a big play threat who can make defenders miss in space or hit a home run on any play. A talented slot back, Tucker can make plays as a receiver in the pass game, shows good hands, and is a threat as a ball carrier, able to get to the perimeter and get into an opponent’s secondary quickly.

Jaquavious Washington, 5’8, 140, DB, 2023, Cardinal Mooney @JaquaviousWash2
Washington is a player that can really make a huge impact in the Cardinal Mooney secondary unit.  A very good open field tackler and a guy that proved he could be a key takeaway type of defender.  Hard hitting DB that closes fast with good speed then hammers down on the ball carrier.  One of the more impressive looking class of 23 DBs in Florida and a player with a lot of potential.  Already reports a 4.5 in the 40 yard dash as a true freshman so has great speed for sure.