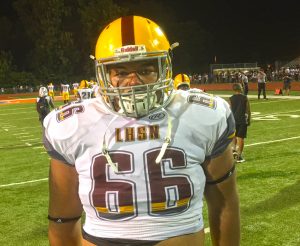 St. Louis area programs Trinity, Chaminade, Lutheran North and Cardinal Ritter ventured to Metro East Illinois to participate in the Gateway Scholars Football Classic in East St. Louis to play against four excellent teams from the state of Illinois. Here are some of the top offensive standouts from St. Louis in the event.

The University of Missouri commit was a load on the offensive line for much of Lutheran North’s loss to Illinois big-school power Homewood-Flossmoor. He is a physical run blocker who can really move well for a big man. He leads an offensive line that is the bread and butter of the Crusaders’ team.

The University of Illinois commit put on a show in the featured game of the night against East St. Louis, which went into three overtimes. Williams amassed 360 yards of total offense and scored a couple of touchdowns in the overtime periods. He rushed for 161 yards and displayed those electrifying moves that make him one of the most entertaining players in the state to watch.

The talented receiver touched the ball about a half dozen teams and each time it was breathtaking. He turned a simple five-yard pass into an 83-yard gallop for a TD in the first quarter. He added another TD just before halftime on an excellent over the shoulder catch against excellent coverage. His breakaway speed makes him a threat to go to the house at any time.

The talented prospect had five receptions for 160 yards and two touchdowns in a 20-12 victory over Cahokia. He caught one on a crossing pattern and turned on the jets for a 71-yard touchdown. His combination of size and breakaway speed make him a most coveted recruited target by many Power 5 conference programs.

The talented big receiver saw double-coverage for most of the night, but he still displayed his vast skills. He made a very nice over the shoulder catch in full stride while staying in bounds in the first quarter. He also added a nifty diving catch to keep a late first-half drive going which ended up in a TD. 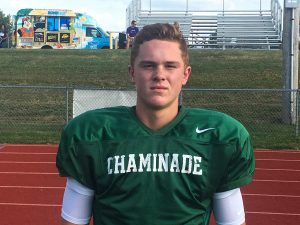 The junior signal caller completed 10 of his 22 passes for 221 yards and a pair of TDs against Chicago Phillips. He moved well in the pocket and made some nice throws on the move. He also scored a rushing touchdown in the third quarter where he trucked a Phillips defender at the goal line, displaying some impressive toughness.

The rising junior back had 214 yards of total offense in the Red Devils loss to Chicago Phillips. In a Week 1 victory over Belleville East, Fortune had 230 yards rushing and two TDs. Last weekend, he displayed his pass-catching skills with four receptions for 152 yards and a pretty 64-yard catch and run for a touchdown. His versatility makes him a potent offensive weapon. 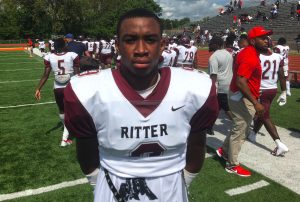 Hagens completed 15 of his 23 passes for 269 yards and three touchdowns in a 20-12 victory over Cahokia. He has good size and mobility and he used his movement well to extend plays and make some big throws to his talented group of receivers.

A returning standout on the Crusaders’ defense, Glenn is now playing running back and he had a productive day against Homewood-Floosmoor with 91 yards rushing while averaging nearly 10 yards per carry. He’s a tough, physical runner who displayed some speed in the open field. 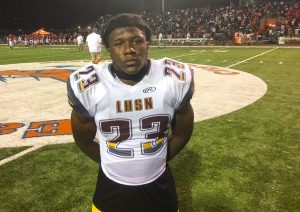 The Arkansas State commit rushed for 77 yards against Homewood-Floosmoor while also playing both ways at linebacker. The big back displayed an excellent burst of speed as he broke loose for a 65-yard TD run in the second quarter to give the Crusaders at 14-7 lead.

One of the top Class of 2022 prospects in the state, Burden made one of the biggest plays of the game against Cahokia with a leaping 20-yard catch for a TD which proved to be the winning score for the Lions. He is a natural athlete with a nice build and the ability to make big plays.