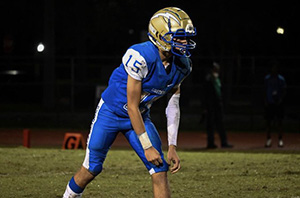 WATCH LIST | Rising young Broward-area WR prospects (2024-25) – We look at some of the emerging stars among WR prospects in the Florida classes of 2024 and 2025, hot sophomore and junior play makers to watch out for like Western’s Adedeji Adegborioye who added touchdowns both in the return game and in action at WR with 800 all-purpose yards on the season as a hot ‘24 class play maker to watch out for.

@shif7ydeji
A good looking athlete coming up from the Western High program, speed threat that can make some big plays, we like Adegborioye as  nice target to haul in some key catches in the near future and is a guy that has some good hands also for the offense to target and go to. One of the most impressive looking deep threat wide receiver prospects in  the Broward Area for ‘24 prospects, he also reports a 4.7 time in the 40 yard dash.  A great route route runner as well. Had 800 All-Purpose yards and four touchdowns with two of those being receiving touchdowns and two return touchdowns.

@ArneusJohnny
We look at this impressive freshman coming up from the Somerset Academy program, Arneus is a player that can be a deep threat down the field  with some quick feet and some excellent hands as well. Arneus uses speed to get behind the defense and be a major weapon to throw the ball up to and watch him make some of those great catches deep down the field. A better looking deep threat play maker coming up in the 2025 class as well.

@JADECARD11
Elite size at 6-3 inches tall, Card is one of the taller looking targets out there and a player that has all the makings of becoming a big time star in the coming 2022 season as a sophomore.  Card is one of those WRs that can also make a huge impact on defense where is an emerging star at linebacker as well and for 2021 Card finished the year with five sacks,one pick and one pick six and 34 tackles and four tackles for losses.

@EdieJoaquin
Good looking athlete and player coming up for Cypress Bay, Edie is a speed threat in the sophomore class and is one of those WRs that can make some big plays and is a good yards after catch target for Cypress Bay.  Edie who had 15 receptions for 269 yards with 4 TDs was a player that had a nice year and has the potential to be a 500-700 yard go to target in the coming seasons ahead.  He averaged 17.9 yards per catch and no doubt has that open field speed to turn a play into a big play. 4.7reported time in the 40 yard dash. Edie played in seven games this year and is in a run first offense so his chances are limited to rack up some bigger stats.  Good looking athlete that has some great potential in the 2024 class. 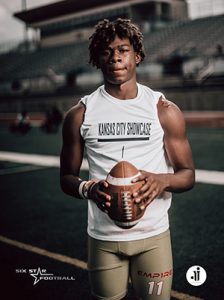 @JamesJTMadison2
Madison is a very impressive looking athlete and at 6-3 inches tall and 203 is both long and powerful after the catch and an elite combo package of a WR that can do it all for Aquinas. Illinois and Ole Miss are the most recent offers on his long list of impressive offers, no doubt Madison is one of the elite play makers in the area and a great looking next level prospect that will be on the elite radar for every big team in the country before its all over.

@CamariJaeden
McGhee is one of the freshman play making WRs in the Broward area that has a very bright future ahead,  and this 6-0, 168 speed weapon is a player that can use his athletic  frame and speed to get open well and get behind the defense to make some of those big game changing kind of catches for the Coral Glades offensive unit. Jaeden could be one of the names to know coming up and emerges into one of the hotter young prospects out there.

@NkumaPlummer
Plummer is one of the guys that has recently jumped onto our radar as a key watch list play maker at the South Broward program.  A guy that can use some impressive speed and is a player that also adds some extra pass catching options, Plummer may project more as a long term running back prospect that has good Instincts, vision, durability, stamina, toughness, playing strength, and good ball security and adds a reported time in the 40 of 4.6.

@wallace_semaj
Wallace is a sophomore for Coconut Creek and is a up and coming future star, at 6-1, 185 Wallace is a player that is one of the best of the best for being down field blockers, this TE comes off the line and gets down the field in a hurry then has the power and the toughness to be one of the major blockers in front of the action and his runners and WRs after their catches.  Excellent lock up and take his man out of the play blocking TE prospect.

@Jalen_Young2
Young could be the star of the future in the class of 2025, no doubt has that speed and skillset to be one of the top looking young prospects on the team and in the Broward Area,  Young is a very athletic play maker that can use a very good set of hands to secure the ball and be a key first down maker.  Young is a good one on the right side of the offense, a target that can make some moves and get open quickly, a good short route and make a catch and then use some speed to turn it into a bigger play kind of athlete, hands and speed are both there for this hot looking ‘25 prospect at Cardinal Gibbons High School.