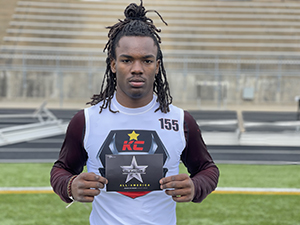 The first of two KC Varsity Combine events run by Wayne Orr and Richard Elkins took place on Saturday at Blue Valley Northwest and featured a host of talented prospects from around the midwest, including  several prospects who earned invitations to The FINALS All-America Showcase on May 29 at Liberty North High School.

Here, Six Star Football takes a look at several of the top RB prospects who stood out at the event. 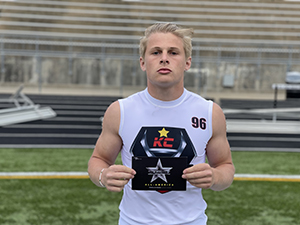 @JaxGlen
One of the athletes to watch for in SW Missouri football, Glendenning will be a key sophomore for the Jackets offense this upcoming season and is a player that is very hard to contain in motion out of the backfield, a proven runner that once he gets the edge is a runner that can pick up a quick 8-10 yards down the field and make some very impressive and long runs with his outside speed.  Good looking athlete that also has some impressive upfield vision and sees the running lanes well then explodes up the field for big gains.

@SD_K1II
Hood is a very impressive athlete and running back from Osage High School in the class of ‘23, a rusher that can use both speed and power, a runner that will not go down easy and a player that is quick to get through the holes and gaps and get down the field in a hurry.  Good power runner that keeps his legs moving and has some impressive vision as a hole hitter to make big plays happen and keep the chains moving.  In just six games Hood rushed for 745 yards on 105 carries and scored eight touchdowns.

@nolimit_juice8
Love is a guy that can do a little bit of everything at a very high level from Center High in Kansas City.  Love has some impressive hands and is a fast and quick play maker that out of the backfield can run or catch the ball and be a big play offensive weapon to go to for big plays and big yards. Jacorey is coming off a big sophomore season and earned All-State honors, no doubt one of the class of ‘24 guys on the move for talented must see RB prospects in KC.  One of the best pure athletes you will see in Missouri football, Love is a very hard worker and his skills should make him a guy with two years left that will rack up several impressive offers. 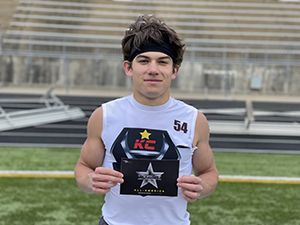 @Jackson6Overton
Overton, a St. Louis All-Metro running back selection from St. Dominic High School and a three-time All-Conference selection, has speed burner written all over his game, Overton reports a 4.5 time in the 40 yard dash and despite being just 5-7, 155 is a pure pound for pound major strength athlete also that reports 270 pound bench press and a 390 pound squat.  Overton had 411 yards receiving on 27 receptions for 2021 as a nice speed threat deep down the field that showed an impressive ability to get behind the defense with beat his man speed in the open field. 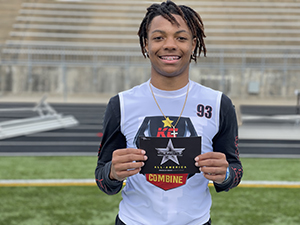 @_Xaviers1
One of the players we had seen at 6Star Football Showcase events, this guy is a player that has nice speed and upfield vision and has the switch between versatility to play either running back or receiver and be a major impact maker, no doubt Xavier’s break away speed, reports a 4.65 time in the 40 yard dash, can make him a player that will be a nice go to weapon this season ahead.  One part of Strickland’s game that is very underrated is his ability to take on tackles and break them or keep his feet moving as a RB that can pick up key 3-4 extra “tough yards” and be one of those power backs with speed that impresses. 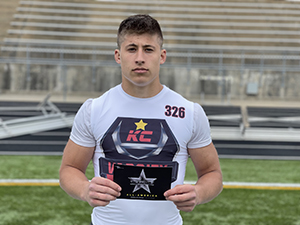 @drew_vanglider
A very impressive looking athlete that can make some big plays, power running back that can bench press 265 pounds and squats 410 pounds. A very tough and physical player, Drew is one of the running backs that is a very physical runner and a quick hole hitter that sees the field in front of him very well and has both big power and some good footwork to make him a very hard runner to bring down for a defense. VanGlider is a very impressive athlete that was named a Second Team All-SWMFCA running back and was named an Academic All-State selection.