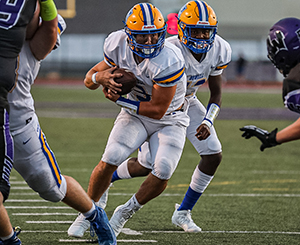 With the next signing day on the horizon and quickly approaching, Six Star Football takes a look at several talented running back prospects who remain uncommitted.

NOTE: This list is the second of a two-part series that also includes several talented prospects that were uncommitted in October, and does not include prospects who were recently featured in Six Star Football Camp & Combine stories. A complete list of uncommitted senior running backs from the Six Star Football event can be found at the link:

Daniel Dickerson, 5’11, 205, RB, 2021, Jackson
Playing for arguably the state’s top team in 2020, Dickerson put together a huge senior season and earned first-team all-state honors in the process. Dickerson averaged 9 yards per carry through 14 games and had 1,230 yards and 21 touchdowns on 136 carries. He’s a straight downhill sprinter who can find his way through coverage and then continue to gain momentum as he works his way down the field. He’s great at using his blockers and can cut and shift his weight and even run over opponents as well. An intelligent player with good size who reports a 3.8 GPA, 25 ACT score and is also a wrestler and a sprinter as well with a 4.640, 4.2 shuttle and 31 vertical. 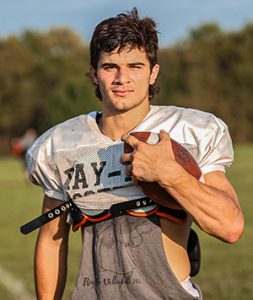 Phillip Fager, 6’0,185, RB, 2021, Raymore-Peculiar  @PhilipFager
Fager is coming off a senior season in which he helped the Panthers win a state championship and earned second-team all-state honors in the process. He shows an athletic build and good vision and strength and he is an underrated player overall in recruiting. He has put in a lot of work and he shows the ability to play physical and push his way through contact and continue drives but also has some athleticism and speed as well. Through 14 games he was able to average 73.8 yards per game on the ground and 27 receiving. He had 22 touchdowns for the year, 19 of them coming on the ground. He finished the year with 1,033 rushing yards and 329 receiving yards.

Zyon Gayfield, 5’9,190, RB, 2021, St. Mary’s @zyonnumber9
Gayfield is an underrated prospect out of St. Mary’s who spent much of the 2020 season splitting his carries with others in a talented backfield, but made the most of his opportunities and finished the season strong. Gayfield rushed for a season-high 115 yards on 11 carriers and a TD in a runaway win over Valle Catholic and finished with 240 yards rushing on 29 carries. Gayfield has terrific vision, can quickly pick out open running lanes, is capable of bouncing to the outside or pick up hard-earned yards between the tackles. Gayfield is not only a talented back but a strong student as well who at last report was No. 1 in his class with a 4.0 GPA. 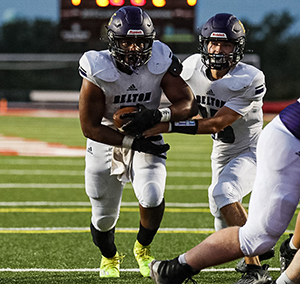 Ayden Holt, 5’10, 225, ATH, 2021, Belton @aydennholt
We also like Holt at linebacker where he is a strong physical presence capable of quickly filling the hole and laying the wood. But he has also been a standout at RB and helped lead a resurgence this season at Belton helping the Pirates turnaround a tough 2019 season and lead a 9-2 season in 2020 while playing 7.5 games. A two-way prospect who averaged 6.4 yards per carry and had 13 touchdowns and 527 yards. he had 39.5 tackles with 18 tackles for loss, 12 sacks and four forced fumbles. He currently holds offers from Central Methodist, Culver Stockton, Westminster, Mid-America Nazarene, Benedictine, and Hanover College. He also has a 3.3 GPA and 26 ACT. 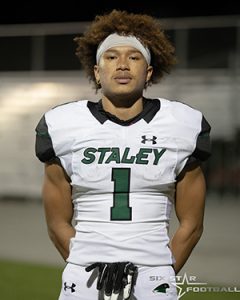 Fabian McLeod, 5’9, 135, RB, 2021, Staley  @FabianMcLeod4
McLeod shows a lot of speed and twitch with the ball in his hands. He’s a quick player on the field whose speed can catch opponents off guard. He can zip through gaps in the line and forces linebackers to play close as he can avoid contact and really create his own path once in space. He reports a 4.4 40 yd dash and 11.33 100 m dash. He’s a strong player for his size as well but his speed is what sets him apart. He can find the edge at times or simply run straight up the middle and avoid tackles as he goes. An underrated athlete who has a good sense of direction.

Montre Moore, 5’8, 205, RB, 2021, Winnetonka @MontreMoore
A second-team Class 4 AP all-state selection, Moore is a strong, physical running back who combines power and quickness. At 5’8, 205-pounds, Moore has a low center of gravity and he shows enough speed to find separation on his own. He has a strong spin move and is great at operating with little room. He can show up on offense, on defense as a linebacker and also in special teams. He reports a 4.7 40 yd dash and has a 415 squad and a 255 bench. His hard work and productive play the last few seasons have showcased his potential and his natural abilities and he currently holds offers from the University of St Mary and Graceland University.

Dane Mohrmann, 5’11, 210, RB, 2021, Francis Howell    @MohrmannDane
The GAC South Player of the Year, Mohrmann is coming off a huge senior season for a talented Francis Howell squad and has drawn interest in the process. At 5’11, 210-pounds, Mohrmann has good size and is a strong, physical runner with a nose for the end zone. He finishes runs strong, can bounce off would-be tacklers and brings terrific leadership to the field as well. Mohrmann rushed for 1,138 yards and 16 TDs this season. Also a LB as well, who’s physicality and toughness also shows up defensively. He recently picked up an offer from Baker University and has drawn interest from Culver-Stockton and Lindenwood as well.

Nosa Ohanmu, 6’0, 200, RB/LB, 2021, KC Center @nohanmu2
Ohanmu was an underrated performer this past season who really showcased a lot of potential on both sides of the ball. He is a physical player who has good strength and overall toughness. He proved to be a big scoring threat on offense and was able to step into gaps and slip through blockers and continue to move through contact. Also a powerful LB who hits extremely hard and can really take the air out of players. A strong, timely and versatile player who understands the game and how to show up and make plays on both sides of the ball. He reports a 3.5 GPA and holds an offer from Peru University.

Taylor Wilson, 5’8, 165, RB, 2021, Lee’s Summit West @_Taylor21k
Wilson is a strong and underrated performer who shows balance and speed and an extremely muscular frame for a size. He’s an all-conference athlete who shows up as a running back in a slot receiver and also in special teams. He ended the season with 1,110 total yards and nine touchdowns. The player who can simply make catches and create or make plays in stride and then avoid contact and make his way down the sideline. Wilson also looks to shake off tackles as a rusher and has breakaway speed, reporting a 4.4 40 yd dash. He’s a balanced player and one who is quick on his feet and brings big plays to the field. 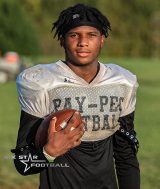 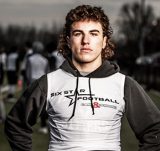 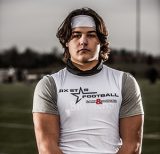