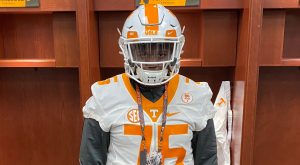 Big Movers on the Offensive Line to know in the Florida ’22 class – We look at some  of the top prospects and big time players on offensive  lines  from the 2022 class.  Players like Louis Bodden of LaSalle with looks from TN and GA  Tech headline the class.  Miami Northwestern’s Tellek Lockette at 6-4, 295 is a 3 star Rivals guy and a player that was a First Team  All-State pick and holds multiple offers  with some of those being Southern Miss and Kentucky just to name a few on his impressive list. Miami standouts 6-3, 300 Tyorice Brown of Monsignor Pace and Jason Jeanty of  Booker T. Washington are huge players that we think are both can’t miss recruits for size and  athletic skills along  with great footwork and movement.   Super hot picks.

Luis Bodden, 6-3, 285, OL, 2022, LaSalle @LB5star
Bodden, who is getting a load of D1 interest, Tennessee and Georgia tech among the early ones that are looking, s a big timer at 6-3, 285 pounds for LaSalle and is one of  the elite looking playmaking big men and centers  in the Sunshine State. No  doubt Bodden is a player that can really get down the field with the best blockers in the state, a big man with some quick feet and some huge explosive blocking power, no doubt a big timer that can make some huge plays and is powerful with the best of them.  A great player that is exciting to watch blow up guys.  No doubt a big time hot prospect to watch out for.

Tyorice Brown, 6-3, 300, OL/C, 2022, Monsignor Pace @_dadeboybrown
A very impressive all-around athlete that is very big at 6-3, 300 pounds, Brown is a man among boys up front for Monsignor Pace.  Brown is one of those big men that can really motor down the field, guys that are 6-3, 300 pounds are not supposed to move that well, but Brown is a big man that can go out and search for guys to block down the field, a very impressive mover with agile feet for his size, have to love the Miami big man and his  skills and size to be a huge impact blocker for the Pace offensive attack.  If you are going to watch a big time lineman we suggest seeing Pace play a game in 2021.

Kamarious Gates, OL, 2022, 6-3, 260, Williston @KamariousG
Certainly a big man up front for Williston, the 6-2, 260 pound Gates can be a big time mover and a force to be reckoned with up front for Williston.  Gates is a junior prospect that can also show he is a guy that really gets into the defender very well, then he uses  his hands well and physically drives his man off the ball, a guy that goes till the whistle blows and one of those big men  that also is a dominate force and uses leg drive and movement to be a huge dominator in the trenches and be a major force play after play for Williston.

Brashawn Hawkins, 6-0, 290, OL, 2022, Miami Southridge @BrashawnH
6-0, 290 and a big time big man that can use his size as a powerful tool in the trenches, we like Hawkins as a hot pick among Miami’s best OL and a top stock riser in the class with some  big time skills.  Hawkins, a player that can make it happen, plays Center on offense, but this past year played a lot of DL, might be a gem on that side of the ball with his playing time focused on being a big time run stopper that can clog the line and fight off the blocks to be a big dominator up front. 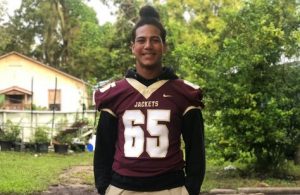 Jason Jackson, 6-4, 215, OL, 2022, St. Augustine @jason_tjackson
Jackson’s style of play is hardworking, with excellent technique, and to be one of those very coachable players that will do what he is told the right way in a timely fashion. Jason is a right offensive tackle and also likes to play tight end as a secondary position. The class of  2022 standout made second team locally.  No doubt when you look at Jackson’s 6-4 frame and his ability to use his leverage very effectively, you have a big man that can really make some huge things happen and some big time  holes open up for his runners.  No doubt Jackson should be on the hot list for big men.

Jason Jeanty, 6-5, 305, OL, 2022, Booker T. Washington @JasonJeantyJr
No doubt one of the best of the best and has been ranked among many as a top 100 player in the state with his pure power and size to be a pure bulldozer of a blocker up front for Booker T. Washington.  Add in a huge frame at 6-5, 305 and every D1 school in the country should no doubt be offering up this huge and talented  smash mouth bruiser from Miami.  A player that has a huge upside,  elite D1 size and power to control and dominate at the next level, Jeanty has all you would want and more  in a big time D1 lineman. 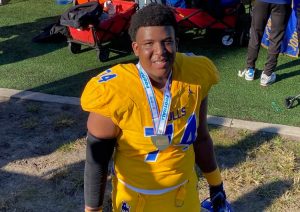 Tellek Lockette, 6-4, 295, OL, 2022, Miami Northwestern @Tlockit_74
The First Team All-State, 6-4, 295 Lockette is a major impressive athlete, with offers from Coastal Carolina, Kentucky, Florida Atlantic and Southern Miss, Lockette is a player we see exploding with offers from all over the country at any given time.  His game is pure impressive and a guy that will take over a game from his OT/OG spots on the tough Northwestern O-Line.  A three star ranked OL by Rivals and  one of those guys that should come into 2021 ranked very high. By far one of the  most athletic big men in the state and a guy that among ranked players could be the biggest climber in the national rankings as well. This guy is pure talent and its hard to find talent much better that what Lockette gives you on the field.

Jake Montford, 6-0, 255, OL, 2022, Bartram Trail @JakeMontford
Montford is a big man that has been impressive up front for Bartram Trail, a team loaded with some big time running backs and offensive firepower that impresses.  His big time work in the trenches should not go unnoticed for  his major impact and ability to make the big time game changing blocks.  Montford is a big man  that can make some big plays happen  and also has been a proven run stopper on the defensive side of the pigskin for Bartram Trail.  A player to keep an eye on in the  junior class for sure.

Richard Popp, 6-0, 258, OL, 2022, St. Brendan @rcpopp74
A very talented Right Tackle and a big man that has been a very impressive man in the trenches for the high powered St. Brendan’s offensive unit.  Popp had  31 pancakes last year and  was named the most improved player on the team. Popp is one of the out right hardest working players that you will find and is for sure that player that goes till the whistle blows.  Runs a 5.6 in the 40 yard dash, has a 25 inch vertical, and a 315 squat.  No doubt will be a key OL for them in the coming year and is a good  looking player that always is putting in the work to be the best.

Kaylin Smith, 6-4, 310, OL, 2022, Booker T. Washington @KaylinS80969058
The big 6-4, 310 Smith is a huge player up front for the powerhouse Booker  T. Washington program and a big body that has earned an offer from Kentucky already.   No doubt his size is a huge factor and he can use that very effectively both for leverage and for pure man handling DL that are in his way or in front of him.  Will look to be one of the big hogs  up front again in 2021 and a big time key veteran in the running attack and pass protection from the big men up  front.  A big time upside and  size, Smith is a special talent to take some notice  of for sure.