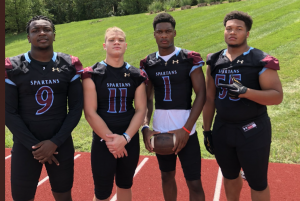 ST. LOUIS — Armed with a deep and talented roster, St. Louis DeSmet is gearing up for a big comeback in 2018 after suffering through tough seasons in 2016 and 2017.

Things start for the Spartans in the trenches where they return significant talent on both sides of the ball, led by 2018 right tackle Marquise Simmons, who returns to lead a young group that got its feet wet last season at the varsity level. At 6’4, 320, Simmons holds numerous Division I offers, including Iowa State, Kansas, Arkansas Pine Bluff, New Mexico, Syracuse, Tennessee-Martin, Texas State and others. A four-year stater, Simmons brings a competitive spirit and leadership to the field for the Spartans.

Also returning are 2021 linemen Hutson Lillibridge (6’4, 303) and Brody Wisecarver (6’6, 280) who are among the state’s premier young linemen. Both players have already drawn significant college interest.

Along the defensive line, 2020 Armon Wallace (6’2, 280) and 2020 Sam Winter (6’2, 240) are both poised for breakout seasons. Wallace currently holds offers from Syracuse, Memphis and Kentucky, among others, while Winter (6’3, 250), is an emerging prospect on both sides of the ball who will compete at both center and defensive tackle.

Seniors Seth Harris and Gavriel Helm return at linebacker, while juniors Lanell Carr and Tomas Farrar are making their marks on the program. Harris (6’2, 210) drew his first offer from Central Missouri in late spring, while Helm recorded 24 tackles a year ago.

Carr (6’3, 220) is a talented hybrid OLB/DE who can rush the passer and plays a physical brand of football and with a big motor. He holds offers from Kansas, Louisiana Tech, Syracuse, Rutgers and is drawing interest from a host of others. Farrar (6’0, 195) is an underrated athlete who brings versatility to the field and the ability to play linebacker or strong safety. 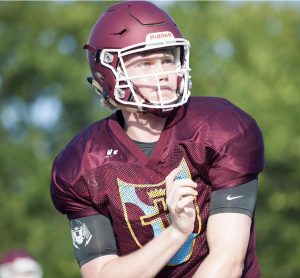 Leading the DeSmet offense is quarterback Nate Martens (6’4, 220), a talented left hander that combines size, a strong arm and plenty of experience. He currently holds offers from Eastern Michigan, Northern Iowa, Temple, Northwestern, Cornell, Holy Cross, South Dakota and Syracuse. He will be a three-year starter and threw for nearly 2,000 yards and 17 TDs as a sophomore and 1,600 yards and 11 TDs last season.

From there, DeSmet has a host of talented playmakers, led by 2020 WR Jordan Johnson, who has emerged as one of the state’s top prospects in the rising junior class. He combines elite speed with strong route running and the ability to snag tough catches and break away from defenses. He currently holds a host of high major offers.

Also returning at WR is 2019 Grant Stegman, who hauled in 17 passes for 306 yards and three TDs last season.

From there, DeSmet features one of St. Louis’ premier 2021 classes that includes several players who made an impact last season, including RB Rico Barfield (6’0, 190), who led team in rushing with 550 yards, Ra’Shod Harvey-Smith (5’8, 140), CB/WR Jakalin Johnson, and others.

DeSmet will run up against a brutal schedule and are slated to open the season on Aug. 26 at home against Hazelwood Central. From there the Spartans will travel to Rock Bridge in week 2 and will face league opponents SLUH, CBC, Vianney, Chaminade in the heart of its schedule. 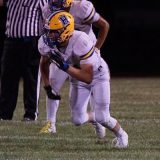