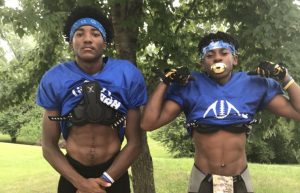 Travion
Ford
DE | 6'4 | 225
Lutheran North | 2021 have been turning heads this summer and with Robert Ford having already made his college choice known, attention has turned to his “little” brother.

Travion Ford is one of the better prospects in the St. Louis 2021 class and at 6’4, 200-pounds, he has the kind of frame and athleticism college coaches often look for in a prospect.

Robert Ford recently committed to South Dakota after a strong junior season and a big spring. He is a shut down corner with terrific speed and athleticism who can make big hits on the defensive end and has the ability to lock up opposing receivers. 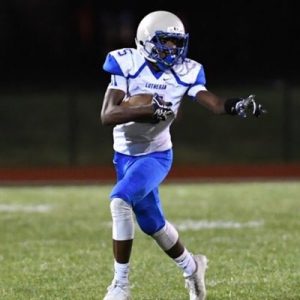 “I feel like I played at a high level last year, but there is still room for improvements,” Ford says. “The experience from last season has me striving to perfect my technique in the offseason.

“I’m working on my defensive back techniques, opening my hips and being a more efficient presser.”

Ford says South Dakota impressed with its weight room facilities and made his commitment after building a strong relationship with the coaches at the school.

“The amount of love the South Dakota football coaching staff showed was phenomenal,” he says. “I feel like I’m a good fit with their football defensive scheme.”

Travion Ford not only combines good size for a player his age, but was also incredibly productive last season as a freshmen and brings the ability to rush the quarterback as well as stop the run. He led the team in tackles with 94, set a school record for most tackles in a single game and was a first-team all-conference and all-district defensive lineman as a freshman. 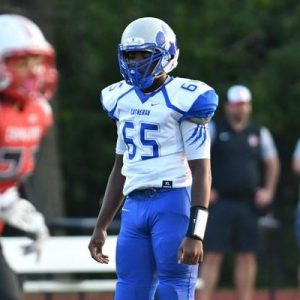 “I feel I had a great season, considering as a freshman I played and started on varsity … my experience will help me to be more prepared for this season,” Ford says.

Ford has been training this offseason at Elite Football Academy to improve his skills and techniques as a defensive end to be even more dominant at his position.

He has attended the HBCU Camp at SLU High School as well as camps at Tennessee State, the Lindenwood Mega Camp and also went to IMG Academy with his 7v7 squad, the Midwest Boom to play in the championship game.

“The experience was great because I was able to compete at a high level against players from all over the US instead of only players in my surrounding area,” Ford says.

Although he does not yet hold an offer, the younger Ford has drawn interest from Kentucky, Memphis, Mizzou, Mississippi State, Illinois and Central Michigan.

In the meantime, the brothers get one more season on the field together at the high school level and hope to lead a young team to improve on its 6-5 record a year ago.