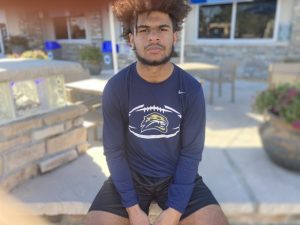 Class of ’23 Athletes and Play makers watch list – We look at some of the more impressive class of ’23 play makers to know and guys that are lean and skilled with top speed and upsides coming up through the super sophomore class rankings. Big targets like Jacob Aguiar of Westminster Academy at 6-4, 215 are early college radar makers and players like 6-1 Joseph Miller of Gulf Coast are already showing game time action and big time games.  Andrea Jocelyn of South Ft. Myers went over 400 yards on the ground as a RB and is a guy capable of going off for a 1,000 with a big 2021 looming ahead.

Jacob Aguiar, 6’4, 215, TE/WR, 2023,  Westminster Academy @AguiarJacob
A very big time size WR and a huge target TE/WR prospect for Westminster, the 6-4, 215 pound Aguiar is a guy that can go down the middle and has the size and toughness to make a lot of nice catches.  Also has some good speed for a longer WR that make key grabs along with a nice set of hands as well.  One of the biggest WR/TE targets in the class of ’23, we expect some big time things from this very big and very talented play maker from Westminster Academy.

Matt Depalma, 6’0, 165, WR, 2023, OOD @depalma_matt
One of the up and coming class of 2023 play making WRs for Out of Door Academy that has some nice potential and speed and a guy we think is on the high radar list for super sophomores to know in the Sunshine State, Depalma is a play maker that can make the most of his 6-0, 165 frame in  the open field and a pass catcher that really does a nice job of getting  open and making some nice grabs.

Jeremiah Gines, 5’10, 160, WR, 2023, Durant @GinesJeremiah
One of those huge athletic play making WRs that can really blow past DBs and make some big plays, an athletic frame and a guy that could be among the best in the ’23 Florida WR class, no doubt Durant has a prime time type play maker in the 5-10, 160 WR prospect.  Gines is  a player that also can get some great separation on his routes and is a very good deep ball threat to watch out for in the open field.  We expect a lot of big time plays down the field for Gines, a player that is one  of the top deep ball threats in the Florida class of ’23. 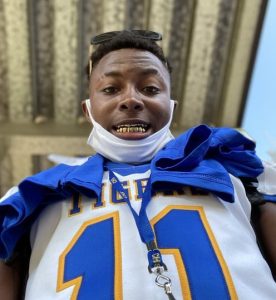 Michael Holmes, 5’9, 137, ATH, 2023, Clewiston @_holmes11
A big time watch out for play making athlete that no doubt will pose a lot of speed matchup problems with his wheels for the Clewiston program. A program with a lot of fine athletes, no doubt we think Holmes will be one in the long lines  of standouts that has college on his radar for the  big time Everglades area program.  Holmes, who has played some nice ball at QB, is a player with both a good arm and good legs and one of those natural athletes that just makes his team better every time he steps onto the football field.

Logan Howard, 5’9, 150, ATH, 2023, River Ridge @Logan5Howard
Taking a look at this dynamic play maker and a Mr. Excitement kind of athlete for River Ridge, Howard is a play maker that is hard to handle when he is on the field.  Logan, a dual threat QB and safety, is one of the young Florida ’23 prospects that we have been most impressed by his arm strength and down field ball placement to hit his targets in stride.  Has the makings of being a top notch QB and is one of those  guys that has some of the top touch on his balls that you will find in the Florida super sophomore class. 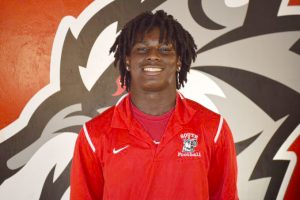 Andre Jocelyn, 5’11, 175, ATH, 2023, South Fort Myers @andrejocelynn
A very good natural athlete that can play both RB and linebacker and is one of those play makers that really has a great feel for the game and some natural instincts that you just can’t teach.  Andre, one of the top notch ’23s in the state, is a player that rushed for 458 yards, 7.3 rushing yards per carry, 50.9 yards per game average, and had three rushing TDs as a sophomore in 2020.  Should be one of the top RB prospects in Southwestern Florida for the ’23 class, has a load of potential and skills plus speed.

Isaiah Lozada, 5’7, 160, ATH, 2023, Oasis @Isaiah1Lozada
Taking a look at a guy that can really be one of the special ones in the Sunshine State class of ’23, Lozada, a sophomore with a huge future ahead for Oasis, is one of those athletes that can really use his athletic frame to make big time things happen.  A very athletically built player, Isaiah is a play maker that can make both great catches by getting open and beating DBs down the field as well as being one of the more dangerous return men in the Florida class of ’23. 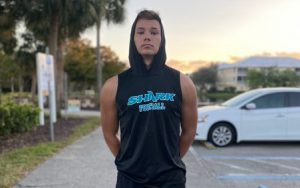 Joseph Miller, 6’1, 190, WR, 2023, Gulf Coast  @Joseph_miller2
One of the bright looking play makers from Gulf Coast High, this super sophomore has speed and then some, a 4.69 in the 40 yard dash guy and a guy that plays even faster in the game time, Miller uses a 6-1, 190 pound frame to be a prime target for the Gulf Coast offense and is a play maker that can make some huge things happen.  Miller also is one of those impressive targets in the FLA ’23.

Daniel Newson, 5’9, 145, WR, 2023, Ida Baker @newson_t
One of those very lean and impressive looking athletes that can run with anyone on the field, a speedy play maker with a big upside, Newson has some big time skills and could be a huge stock rising in the next two seasons for the powerful Ida Baker squad.  Newson is a WR that can really come out on top in one on one matchups with his speed and his play making skills on the ball while its in the air, big time skills to have for the next level for sure.

Collin Romano, 6’1, 205, ATH, 2023, Palm Beach Central @CollinRomano1
One of those play makers that is a very impressive and hot pick in the Florida 2023 class, meet Collin Romano, a 6-1, 205 big timer.  Romano is one of those players that will not be outworked and is always hitting the weights hard and pushing himself to the limit and its showing on the field as this super sophomore is stronger and faster during in game action.   A guy that is a very good DE/LB off the edge that has power and aggressiveness to his style of play and can be a huge player in the next two years for Palm Beach Central. 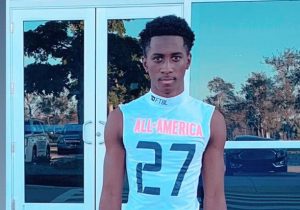 Tristen Sion, 6’1, 170, DB/ATH, 2023, FAMU @Tristen7k
One of the very impressive ’23s to have on your list of must see athletes and play makers has to be 6-1, 170 super sophomore sensation Tristen Sion.   One of the top 20 DBs in the state for rankings, Sion is one electric play making ’23 and a guy that has a 6-1, 170 frame, can get up and make some big time plays against the ball in the air, making him one of the top and hottest DB prospect in the Sunshine State class of ’23. One super sophomore to know.  The top lockdown DB is getting a lot of D1 interest from schools such as Arizona State, Stanford, Iowa State, and Auburn among his long list of schools that are taking long looks a the impressive Sion. 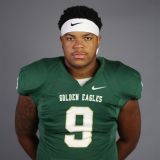