Six Star Football introduces the College Coaches Corner with a look at players around the state college programs are checking out. This list includes, but is not limited to, evaluations, scouting reports and updated Hudl highlights, making it easy for coaches to view an athletes bio and then check out their film and contact them... Read more » 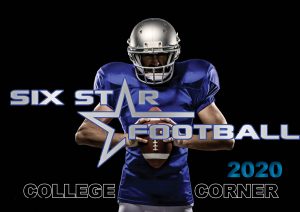 Six Star Football introduces the College Coaches Corner with a look at players around the state college programs are checking out. This list includes, but is not limited to, evaluations, scouting reports and updated Hudl highlights, making it easy for coaches to view an athletes bio and then check out their film and contact them through Twitter. College coaches who would like additional information about an athlete may request via email at sixstarfootball@gmail.com.

Bevan is coming off a big junior season in which he recorded 73 tackles, five tackles for loss and a sack. He has a big frame that will likely continue to add size and muscle mass with age. He is a hard-nosed player and shows an ability to make quick reads and attack the ball without overthinking the play. A player who is quick to react. Also a standout student, Bevan reports a 3.9 GPA and a 30 ACT score. 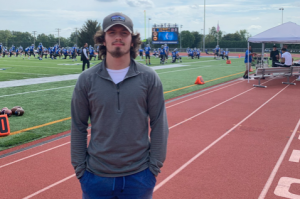 An all-conference performer last season, Callahan is a rising prospect who brings terrific quickness and versatility to the field and is strong at helping his team set the edge, but can also drop back into pass coverage as well. He was a big play maker last season, forcing three fumbles and finishing the season as one of his team’s leading tacklers. He has put together a strong offseason, competing well at several events, including, most recently the Butler Camp. Also a standout student who reports a 3.8 GPA, Callahan has drawn interest from several college programs this spring, earning invites to visit several campuses. 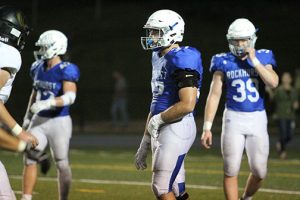 Glaser has had an impactful summer and is expected to reach new heights this upcoming season. He had a terrific year with Rockhurst as he saw playing time as a disrupter and all-around physical play.  He combines terrific all-around athleticism with a terrific frame that will only get stronger with age. Glaser has committed to play for the University of South Dakota. 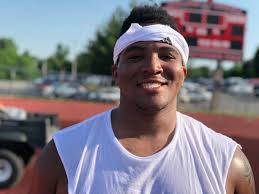 A four-year varsity starter this upcoming season and among the city’s most dominant defensive players during that time. He is a strong, physical presence off the line who can shed double coverage find his way through the line. He is strong and relentless. He recently picked up offers from Butler, SEMO, Howard, Augustana, Minnesota State, Missouri Southern and NW Missouri, and is drawing interest from a host of other programs. 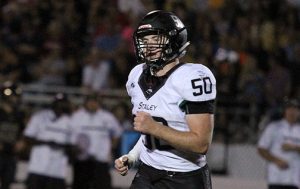 Gregg is a tough, physical player with terrific size at 6’2, 220-pounds and brings a big motor to the field with the ability to get off blocks and get to the ball. A multi-sport athlete who has earned several offers, including Butler, Augustana, Quincy and Missouri Baptist and has drawn interest from several other programs as well. Gregg has a nice combination of speed and strength making him an important piece for Staley and one who combines leadership and a deep understanding of the game and his position.

One of the smaller players on the field who is also one of the fastest and often very productive. Grosko is undersized at 5’7,150-pounds, but he is a hard worker who utilizes terrific speed, quickness and the ability to quickly read plays on the move and commit and make contact. Grosko recently competed at Kansas Wesleyan and has also heard from Missouri Western, Culver Stockton and others.

Gysbers is a nice player for Rock Bridge who makes smart plays and has good vision. He hits hard and is good at stopping the run game and showed athleticism in open space.He recorded 67 tackles, including 11 for loss, two sacks and four fumble recoveries last season. He has drawn interest from a host of programs, including Dordt, Washburn, Monmouth, Central Missouri, Alabama State and others. 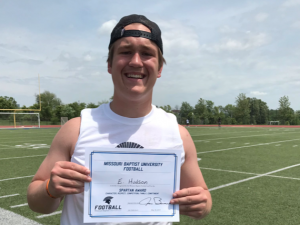 Hudson is a strong middle linebacker prospect with good size and brings a technically sound style of play to the field. He is a force of nature when he’s in the zone and hit hard and makes timely plays. He is great at stopping the run and he forces ball carries to think twice before running his direction. A two-time all-conference selection, Hudson recorded 58 tackles, a sack and an interception last season. Hudson holds offers from Missouri Baptist, Concordia University and Benedictine College and has drawn interest from Princeton, Washington, Drake, Washburn, Yale, MIT and others. Hudson has been active this summer and had a strong showing at Butler and Missouri State. 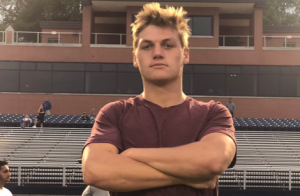 Brock Jones, 6’0, 185, MLB, 2020, Ladue
A seasoned player for Ladue who sees a ton of action on the field. He demands a lot from himself and he works hard at making strong and timely hits. He has good speed and reads defenses well. He can break up passes and find a way to stop the ball in the running game. An all-state, all-metro performer who knows what it takes to win games. Jones has received a lot of attention during the off-season with several visits and camps to FCS and FBS programs such as Nebraska, Air Force, Butler Arkansas State and others. 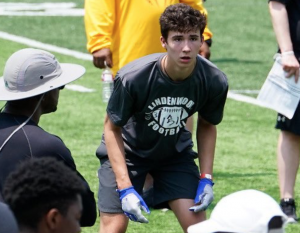 An interesting player who brings a unique combination of height, length and speed to the field as a defensive back. He is great at reading receivers and has the size and ability to keep opposing players on their toes. He has great reach and can get a body on them and cover his area quickly and efficiently. Larsen is a patient player and one who is expected to have a standout senior season.

A solid player on the rise from Staley, Lyons has good size at 6’1 and is able to run stride for stride with the top receivers in the area. He has great speed, solid footwork and brings toughness and focus to the position as he’s extremely competitive. Lyons had a terrific summer as he currently holds offers from Army West Point, Lindenwood, Quincy, Missouri Baptist and Augustana.

One of the top senior LBs in southwest Missouri and an impressive all-around athlete at that. Maasen is an athletic middle linebacker who runs well, plays bigger than his listed height and is a strong, tough tackler in space. He sees the field well and covers a large area with ease. A lot of his attention is focused on the run and he excels in this area. Maasen reports a 4.77 40-yard dash time and finished his junior season with nearly 50 tackles. He was a standout at the first-ever Six Star Camp & Combine, recording a 4.87 40 time, a 8’8.5 broad jump and a 34’10 power ball throw showing solid numbers across the board. 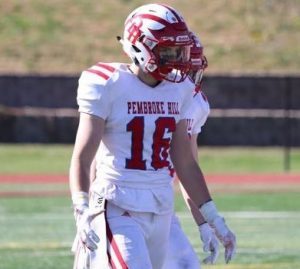 A fine player for Pembroke Hill who brings speed and athleticism to the field. Mullen is an athletic player off the line and has the speed and agility to pressure the quarterback throughout the entire game. He has a nice first step and has a creativeness to him which helps him avoid blockers. Mullen has a lean frame, but has a build that can put on weight and muscle in the future. He competed at several camps, including Yale, Colgate, Fordham, Pomona-Pitzer and others and holds offers from Wesleyan University,  Defiance College and Occidental College. He also scored a 28 on his ACT. 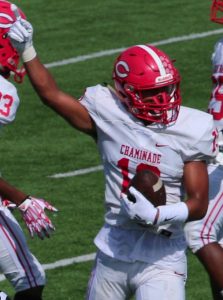 An all-state performer last season, Nichols is a tough defensive player who has good vision, speed and overall athleticism. Nichols is one of the most productive safety prospects in the St. Louis, leading Chaminade with 106 tackles. He reads plays and reacts in a timely fashion. He flies around the field and can get to the ball and disrupt plays through the air. He has drawn offers from Butler and Missouri Western and interest from a variety of programs, including FCS programs such as South Dakota, Missouri State, Indiana State and others.

An extremely talented defensive back who brings in-game quickness and a great deal of athleticism to the table. At 6’1, 180-pounds Powell has a good frame and the agility and bounce to make plays in open field. Although he can see time as a receiver, Powell is a solid tackler and is great at breaking up plays and swatting away passes. He has received interest from several schools and currently holds offers from Northwest Missouri State, Northeastern State, Southeast Missouri State, Western Illinois, Eastern Illinois, Austin Peay University of Tennessee.

A first team all state performer a year ago who dominates and disrupts lines in southwest Missouri, Raney is a strong athlete who can overtake opponents and close up space in the pocket. He has good size and weight and is a physical presence that’s difficult to slow down when he sees red.Raney currently holds offers from Northwestern College, William Penn and Friends University. 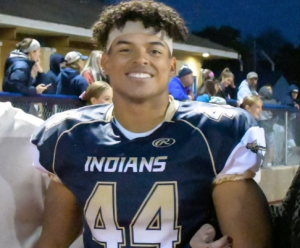 There are times it feels impossible to slow Reed down. When he’s coming off the left side in search of a sack it’s difficult for blockers to stay with his speed and overall athleticism as he shakes off defenders. Reed has 24 tackles, one sack, one interception, one fumble recovery and six tackles for a loss which showcases his explosiveness and ability to get in the backfield and bring down the runner. Another underrated prospect who is quietly putting together a strong season. 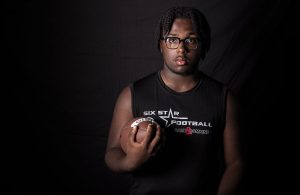 Terrance is one of the Kansas City area’s most unique players as he starts at left guard and middle linebacker. At guard, Terrance is somewhat undersized at 5’11, 235-pounds, but brings terrific athleticism and toughness to the position, and at middle linebacker, he commands the middle of the field, shrugging off would-be blockers and making hard, clean tackles.He put together a strong game for the Tigers in a hard-fought 17-12 loss.

Ward looked sharp this summer in a number of college camps and combines showing excellent vision and solid athleticism to go along with his competitive drive. Ward brings a strong frame to the field standing 6’2 and weighing in at 180-pounds. He has good hands and can break up passes and come away with the ball. Ward is a playmaker and is expected to have a productive year as a senior. He has drawn significant interest from colleges and currently holds an offer from St. Thomas Aquinas. 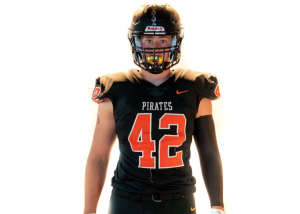 One of the more versatile defensive players in the KC area who brings intelligence, strength and speed to the field. Watson is a fast player who sees time as a DE, MLB and OLB due to his quickness, physicality, alert mindset and lean overall size at 6’2, 215-pounds. He learns quickly and provides leadership and seasoned play, which made him stand out as a junior. Watson has been putting in the time and continues to draw interest from several programs. He currently holds an offer from Benedictine College.

RISING PROSPECT: JASON PETTY A BACKER ON A MISSION AT KIRKWOOD

RISING PROSPECT: BOOKER SIMMONS POCKET PASSER IN ’22 ON THE RISE 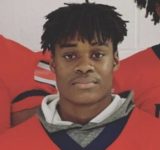 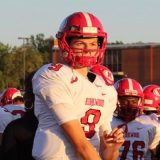