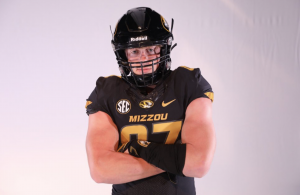 Six Star Football takes a look at several Missouri athletes who have announced their college decision from Dec. 7-17.

This list will be updated throughout the next couple of months as seniors make their decisions known. A previous list of recent college commitments was published on Dec. 7 and can be found here.

Know of a player who has made a college commitment recently, drop us a note at sixstarfootball@gmail.com.

Niko Hea, 6’5, 235, TE, 2019, CBC. @HeaNiko (pictured)
Missouri
Committed to Mizzou on Monday after a phone call with members of the Tigers’ coaching staff. Hea had drawn a bevy of offers from colleges at all levels over the past several months, but hadn’t drawn an offer from a high major before Mizzou that we are aware of  …. however, we feel there a lot of Power 5 type programs that are going to regret not offering Hea. He’s a difference maker at TE as he combined a terrific work ethic, size, athleticism, hands and the ability to make plays as a pass catching threat downfield. Mix in a frame that can add good muscle mass going forward. 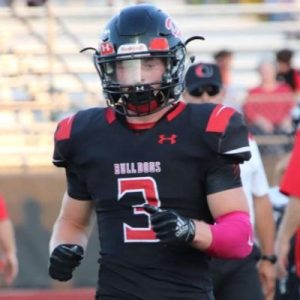 Jonas
Bennett
WR | 6'0 | 185
Odessa | 2019, 6’0, 185, WR, 2019, Odessa. @JonasBennett1
Missouri Western
One of the more underrated prospects in the Kansas City area, Bennett put together a huge season for Odessa, hauling in 52 passes for 971 yards and 16 TDs through the first 12 games and leading Odessa into the Class 4 quarterfinals. He has good speed, athleticism, a solid frame and build and brings a lot of competitiveness to the field. He can get behind a defense, go over the middle of the field and is a creative runner in the open field and difficult for opposing teams to get a handle on. 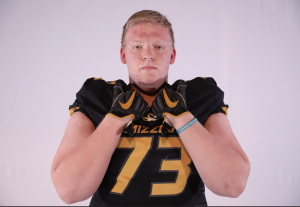 DJ
Bullard
OL | 6'4 | 305
Rockwood Summit | 2019, 6’4, 305, OL, Rockwood Summit. @DjfalconDj
Missouri (PWO)
Bullard is a big, strong physical lineman who brings good versatility to the field. He has the ability to play multiple positions and is among the better rising center’s in the junior class. His shotgun snaps seem to be on time and accurate, he moves his feet well and does a good job at the point of attack. 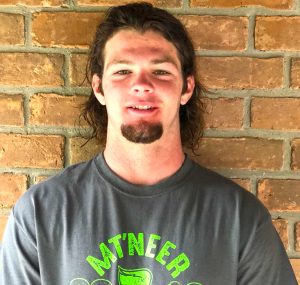 Will
Boswell
LB | 6'1 | 210
Mount Vernon | 2019, 6’1, 205, LB, 2019, Mt Vernon. @boswellwill22
Northwest Missouri State
Boswell put together a huge senior season and finished his career as the state’s career leader in tackles with 630. Film shows a player who is quick to react after the snap and can find space through the line with ease making life incredibly difficult for opposing offenses. Boswell is lean, athletic and scrappy across the board. 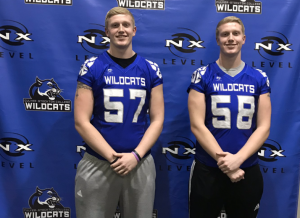 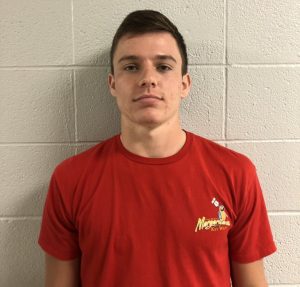 Cole
Elwood
S | 6'1 | 186
Fox | 2019, 6’0, 185, S, 2019, Fox. @elwood_cole
Northwest Missouri State
A tough, rangy safety with the ability to make plays against the run and play the ball in the air. He has largely flown under the radar at Fox, but we see a player with good size and a natural instinct for playing the safety position. He helped lead Fox to a 9-2 record, recording 60 tackles, four interceptions and a pair of fumble recoveries. 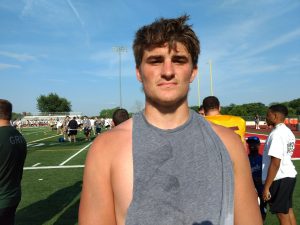 Hunter
Garrison
OT | 6'6 | 260
Odessa | 2019, 6’5, 245, TE, 2019, Odessa @huntergarrison5
Missouri State
Garrison could play any number of positions at the next level, including defensive end, tight end, or could even transition to a spot on the offensive line with added weight gain. He has a big, athletic frame with good weight, strength and terrific agility. He brings a big rush off the edge and is always making plays on the defensive line, but we like his toughness as a blocker and the downfield threat he brings in the passing game at TE. He is a strong blocker either at the point of attack on the line, or downfield where he can blow up a defender in space. He is tough to tackle, and shakes off tacklers with ease. 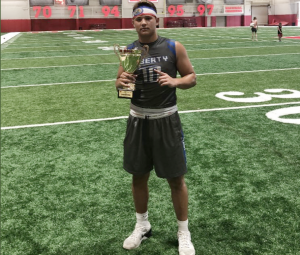 Nathan
Gray
LB/WR | 5'11 | 185
Liberty | 2019, 5’11, 185, LB/S, 2019, Liberty. @Gray_Nathan10
Northwest Missouri State
An all-state linebacker, Gray excels all over the field, on special teams, as a playmaking outside linebacker and, as a receiver and as a runner. Gray caught 29 passes for four TDs, and had 314 rushing yards and six TDs. As a defensive player, Gray shows a nose for the ball, covers a lot of space and is capable of shedding blocks quickly and making players on the perimeter. Gray is seemingly always around the ball, coming up with big plays. He is terrific in space and can get to the edge and blow up a play on the perimeter, dislodge a receiver from the ball or get upfield and make a play behind the line of scrimmage. 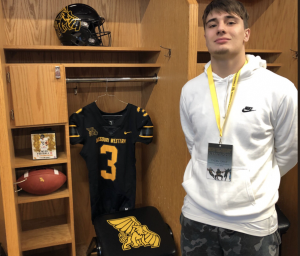 Tycen GrayTycen
Gray
WR | 6'4 | 200
Farmington | 2019, 6’4, 210, ATH, 2019, Farmington @GrayTycen
Missouri Western
A two-sport standout that also excels on the basketball court, Gray has intriguing size at 6’4, 210 and combines good size, athleticism and agility with the ability to make plays. He drew interest from a host of schools, including several Ivy League programs. He brings some versatility to the field for Farmington, lining up at running back, receiver and playing on defense as well.

Cole
Martin
QB/ATH | 6'5 | 215
Timberland | 2019, 6’6, 215, QB/ATH, 2019, Timberland. @WolvesCole
Quincy
Martin has terrific size and has an athletic looking frame that will likely translate to the next level. Film shows a player with a strong arm, the size to see downfield and the willingness to stand tall in the pocket. He could also see time at other positions and has the kind of frame that projects well to other spots on the field.

Gavin
McGinness
QB/S | 6'2 | 185
Fox | 2019, 6’2, 185, QB/S, 2019, Fox. @gavin_mcginness
McKendree
McGinness has good size, is a good athlete and put together a big season running the ball as he picked up nearly 1,200 yards and 18 TDs while averaging more than 10 yards per carry. He also showed a lot of promise o defense at safety as he recorded 56 tackles and brings terrific football IQ with the ability to diagnose plays quickly and fly to the ball. 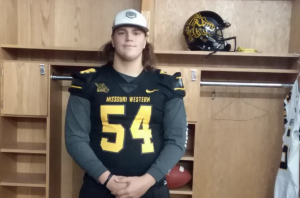 Ben Miller, 6’3, 275, DL/OL, 2019, Westran. @BMill1654
Missouri Western.
Not really someone we had heard a lot about up to this point as he is a small school kid who mostly played under the radar. As a defensive lineman, he shows a huge motor, not only pressuring the QB and getting into the backcourt, but willing to run down plays, chase the ball down field. He reports a sub 5.0 40-yard dash and a 26-inch vertical jump, solid numbers for a 6’3, 275-pound athlete.

Payton
Murray
S | 6'1 | 153
Park Hill South | 2019, 6’1, 165, S, 2019, Park Hill South. @P9Murray
Missouri Western
Murray is an athletic and rangy safety who covers a lot of ground defensively. Shows good leadership qualities as he is constantly talking and helping set up the PHS defense. He has a good, athletic frame and has worked hard to get stronger.

Tristan
Roper
OL | 6'5 | 270
Blue Springs South | 2019, 6’5, 280, OL, 2019, Blue Springs South. @tristanroper71
Northern Iowa
Roper was one of the Kansas City area’s premier offensive lineman prospects, blessed with a unique combination of size, athleticism and potential. He has the kind of frame that college scouts look for that could add good weight and muscle mass going forward, and the kind of footwork that allows him to excel is pass protection. He was a stalwart at tackle for a BSS program that needed steady, consistent play and played on both sides of the ball this season.

Blake
Rufkahr
OL | 6'5 | 270
Wright City | 2019, 6’4, 270, OL, 2019, Duchesne. @blake_rufkahr
Missouri Western
Rufkahr is an athletic offensive lineman who has played this season at right tackle, a position he likely projects to at the next level. He has plenty of room to grow with a lean frame that will likely add good weight in the future. He shows good footwork and agility and has the ability to pull and make athletic blocks out in space. 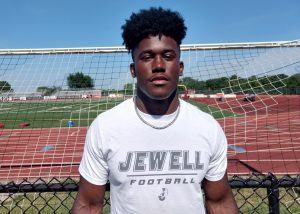 Ontario
Russell
RB/ATH | 6'0 | 195
Lee's Summit North | 2019, RB, 2019, Lee’s Summit North. @ontario_russell
Miami (Ohio)
A former Missouri State commit, Russell is blessed with terrific size, speed and athleticism, Russell is a physical specimen who combines physical tools with on-field production. He rushed for 1,092 yards and nine TDs this season as part of a loaded backfield that split carries and also led the Broncos with 17 catches for 271 yards and four TDs in the passing game, He is a versatile player who blocks well, can be an effective outlet receiver and is a strong, physical runner. Russell saw his recruiting pick up throughout the season.

Tyler
Smith
OL | 6'5 | 275
Joplin | 2019, 6’5, 275, OL, 2019, Joplin. @tylerthetiger76
South Dakota
Smith flew under the radar as a prospect throughout much of the season as Joplin featured numerous skill players who drew more attention, but he has good size and a lean frame and handled himself well at tackle last season for the Eagles.

Grant Stegman, 6’0, 185, WR, 2019, DeSmet. @StegmanGrant
Butler
Playing on a DeSmet team that featured future college football players all over the field, Stegman didn’t put up eye popping numbers and he had to share the spotlight with others, but he made his impact felt, hauling in 18 passes for 321 yards and four TDs. e is a tough, physical receiver who likes to block down field, can make spectacular catches and can climb the ladder and high point the ball. He runs good routes and has plus hands as he catches everything thrown his way.

Trey
Vaval
CB | 6'0 | 165
Blue Springs South | 2019, 6’0, 165, CB, 2019, Blue Springs South. @trey_vaval_
Missouri Western
One of the KC area’s most underrated players, Vaval is a terrific defensive back who can lock up receivers, make plays and is terrific in the return game. He’s a little on the small side, but has terrific speed and athleticism. He also shows some toughness for a player his size, isn’t afraid of physicality or coming up and making plays in the run game. Terrific closing speed in the secondary, whether it is breaking on the ball or a ball carrier.

Von
Young
LB | 6'0 | 195
Fort Osage | 2019, 6’0, 195, OLB, 2019, Fort Osage. @Von_IV
Missouri State
Known mostly for his abilities on defense, Young was a force all over the field this season and helped Fort Osage to a Class 5 state championship appearance. Young is second on the Indians with 89 tackles, nine for loss, has added six sacks, two interceptions and two fumble recoveries. Young has also excelled in the Indians’ Wildcat formation and has rushed for 184 yards on just 20 carries, averaging 9.2 ypc, and three TDs. He combines speed, athleticism with strength and a physical style of play at outside linebacker. Young reports a 4.61 40 yard dash time and a 33 inch vertical and his film shows a player who sheds blocks and tackles well in space.