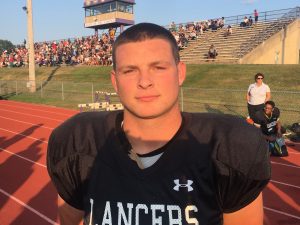 Lafayette 2018 linebacker Hayden Bollinger has established himself as one of the premier players in St. Louis entering the upcoming 2017 season and is taking his hard-nosed style of football to Army after also drawing an offer from Syracuse.

A physical and downhill-type linebacker, the 6’0, 215-pound Bollinger is coming off a big season in which he made 110 tackles, including 13 for loss.

Bollinger says he takes pride in his physical brand of play.

“I’m going to come right at you and try to set the tone,” he said. “I want opposing players to think of me every time they get the ball.”

Bollinger says the Lancers have a lot of potential after going 7-4 a year ago, even though they are likely to field a young squad short on experience.

“We have a lot of motivated underclassmen who have talent that other teams haven’t seen,” he said. “It’s a district championship or bust type of year.”

Bollinger says he has spent much of the offseason working working on improving his speed and hips in order to improve his coverage skills.

He began playing football at age 7 for the Chesterfield Bears all throughout elementary and middle school and formed relationships with several St. Louis area players that remain today.

“It really gave me the opportunity to compete against not only the top kids in St. Louis but all of the midwest,” he said. “It gave me the chance to meet players that I’m still close with today.”

He says his parents have been the biggest influence on his football career to date.

“(They) have definitely been the most influential people in my football life,” he said. “Everyday they go above and beyond for me by supporting me and my goals. Sacrificing their time and resources just to help me accomplish my dreams.”

A fan of former Clemson standout and current Carolina Panther Ben Boulware, Bollinger says he has tried to implement elements of his game and make them his own.

“Everything from the way he plays to his preparation is what it takes to be a successful football player,” Bollinger said. “His drive and passion for learning everything about the linebacker position really inspires me to do the same. All time though I have to look at Lawrence Taylor. The way he imposed his will physically on other teams is exactly the on field impact I want to have.”

In addition to offers from Syracuse and Army, Bollinger received a lot of interest from a host of Division I programs, including Stanford, Arizona State, Columbia, Penn, Kansas State, and Air Force before making his decision this past summer.