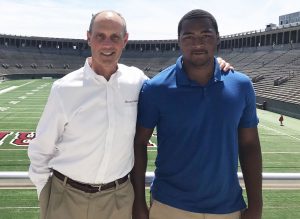 KANSAS CITY — Rockhurst 2018 DL Jacob Sykes is headed to Harvard after choosing the Ivy League school over a host of other offers.

At 6’4, 250-pounds, Sykes lined up at a wide variety of positions last year, serving as a run-stuffing interior defensive lineman, a passing rushing end, a pass catching tight end and a blocking fullback.

“I try do whatever it takes to make a play,” he said. “I follow my reads then fro to react as an athlete.”

He chose Harvard over Northwestern, Columbia, Cornell, Dartmouth, Rutgers and others.

“The name Harvard and the doors that going to Harvard opens up for you are hard to pass up,” Sykes said.

Sykes says expectations are high this year for a Rockhurst squad that advanced to the Class 6 semifinals a year ago.

“My high school team is returning a lot of talent. We are looking at a good shot to the state championship,” Sykes said.

Sykes says he is spending the offseason working on driving people off the ball even more and getting more plays in the backfield.

He began playing when he was young in the local city league.

“No real special programs just a lot of hard work that some would call unreasonable for little kids,” he said.

Sykes says his family and friends have had the biggest influence on his football career to date. He says he is a fan of the Kansas City Chiefs

“I don’t really look at one particular person but being from Kansas City, I do like the Chiefs front 4,” he said.