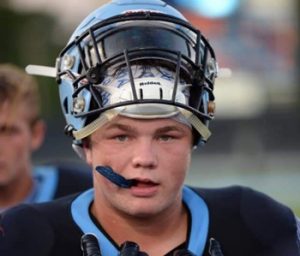 Style of play
Braeden – I’m an aggressive hard hitting linebacker that takes pride in the physical part of the game.

Braeden -This off season I will get bigger faster and stronger as well as working on my leadership skills.

Most memorable game
Braeden -This year against Sand Springs my dad won what’s called “Coach For A Game”. It allowed him to stand down on the sideline with my brother who is also a coach and be apart of the win that night. It was a great night.

Pre game
Braeden – I listen to music and run through plays in my head.

Favorite song
Braeden -Ballin or Every Season by Roddy Rich

Favorite NFL player as a kid
Braeden – as a Kid

teammate could be college star
Braeden -Caden Davis. Dude is a baller!

Player to keep an eye on
Braeden -Caleb Perry