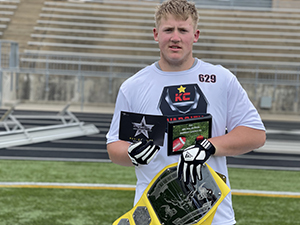 KC VARSITY EVENT COVERAGE | Rising OL prospects impress in Kansas City —  The first of two KC Varsity Combine events run by Wayne Orr and Richard Elkins took place on Saturday at Blue Valley Northwest and featured a host of talented prospects from around the midwest, including  several prospects who earned invitations to The FINALS All-America Showcase on May 29 at Liberty North High School.

Here, Six Star Football takes a look at several of the top OL prospects who stood out at the event. 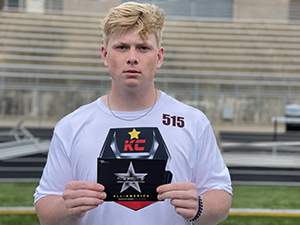 @B_Careswell
Recent offers from Lindenwood and Peru State no doubt show the big man’s true next level  talents and potential, 6-3, 255, Careswell is a big man on the line that can move very well and has the power to blow up DL, a player that is very active with impressive footwork, one of those blockers that can get down the field to the next level of his blocks and make some huge holes for the offense to run through. Has both power and leg drive off the edge that make him a very tough man to move and get any upfield movement of leverage against. 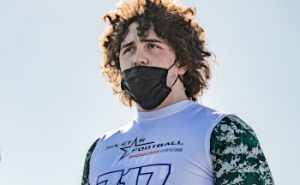 @LeviCooley70
Cooley is a top big man prospect in the senior class and a guy with a proven record of being one of the  top lineman in the state.  6-4, 300, no doubt he has both some impressive length and power to be a dominator of the trenches at Basehor-Linwood. Cooley is a three time All-Conference selection and a big man that has earned All-State honors two years in a row and no doubt is a college radar big man maker that should be a top tier line prospect in 2022. Cooley reports a 510 squat and a 275 pound bench as one of the true elite power and strength lineman in KC Metro, no doubt a big man on a mission that has been a huge impact maker in the trenches. 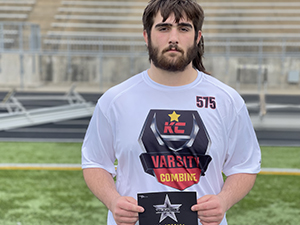 @noahelbert5
Don’t be fooled by Elbert’s listed 5’10, 220-pound frame — he is all heart and the offensive lineman had an impressive performance on Saturday at the KC Varisty Combines, advancing all the way to the finals of the King of the Hill competition at the end of the event. Elbert is a strong, physical player who relies on quick feet, strong technique and a determined attitude. He is a two-time all-state player who has also impressed on the defensive line. For his efforts Elbert earned an invitation to The FINALS All-America Showcase on May 29 in Liberty. 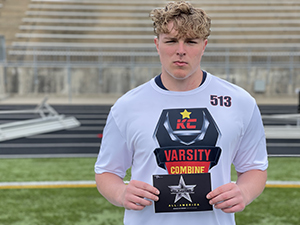 @SeanMiller62
Miller is a tough as nails 6’1, 230 pound two way lineman and Topeka top prospect list player that should be that MVP type player for Seaman as a big senior lineman in 2022. Miller, who has an impressive 78 wingspan, earned Second Team All-League honors as a junior and can play either Guard or Tackle on the offensive line.  Miller is one of those lineman that has good aggressive hands and can get into the defender and push his man off the line, no doubt one of the top power players and tough guys to know in Kansas football.  Miller is a good mover in space also and can make a lot of big blocks happen. 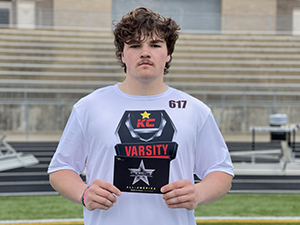 @ChaseWisecar77
A talented young tackle prospect, Wisecarver is a technician with a high football IQ and the ability to slide his feet and maintain leverage against pass rushers. He impressed with some physicality and toughness during 1v1s and showed why he is among the state’s top young OL prospects. His older brother Brody (@Bwise771) played at Illinois after a stadout high school career and Chase is off to a strong start following in his footsteps.

@CZwart05
Olathe West 2023 Cooper Zwart had a coming out party of sorts on Saturday at the KC Varsity Combine, first taking home the King of the Hill awards — and then earning his first NCAA Division I offers from Missouri State and SEMO. At Zwart at 6-4, 290 is one of those huge men that can make blow up blocks for Olathe West, Zwart is a big man that can slide between tackle and guard spots as needed on the O-Line and had a 77 inch wingspan as well to make him a lengthy lineman to try and get past, no doubt  a size that impresses kind of recruit. Cooper also holds a 26.4 inch vertical and has a wrestling background that gives him some extra grit and toughness on the football field along with knowing how to use his leverage well.