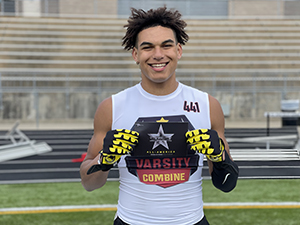 The first of two KC Varsity Combine events run by Wayne Orr and Richard Elkins took place on Saturday at Blue Valley Northwest and featured a host of talented prospects from around the midwest, including  several prospects who earned invitations to The FINALS All-America Showcase on May 29 at Liberty North High School.

Here, Six Star Football takes a look at several of the top QB, WR and TE prospects who stood out at the event. 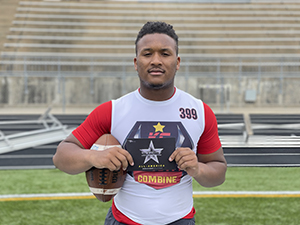 @iiamcotton5x
Cotton, a 5-11, 190 big time athlete from DeSmet Jesuit, no doubt is one superb QB prospect and a play maker that has shown he has one of the top guns in Missouri football, impressive pure arm strength and velocity on his passes to fire the ball in there and make one impressive throw after another down the field. Cotton is a leader and one of the guys that has proven he is an impressive manager of the offense and a guy that excels under pressure to make the big plays happen.  Jumping onto several college radars, the Mid-American Conference is one of the leagues that has several schools taking an interest in Cotton’s next level potential. 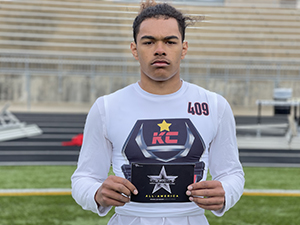 @Mannyball1
One of Kansas City’s top rising QB prospects in the 2023 class, Raytown South Emanuel Burnett is an athletic, dual threat type QB prospect who has a 73 ¼ wingspan and is a play maker that can has jumped onto some college radars with his athletic skill set and play making abilities under center, in just six games due to Covid passed for an impressive 1,033 yards through the air and is a very impressive quick release and make a big throw prospect that should grab more and more well deserved attention this upcoming senior season. He has drawn some college interest this offseason, notably East Central in Oklahoma. 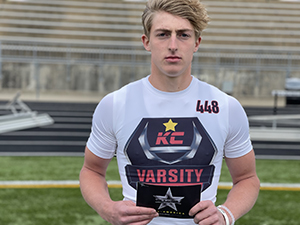 @HaydenJay18
When you look at the whose who of Kansas football QB prospects it doesn’t get much better that state champion QB prospect and senior to be Hayden Jay, smart and athletic and a big time leader on the football field at Mill Valley, Jay is a make it happen QB with a power arm and a heady poise to the game that makes him a one of a kind prospect to have on the college radar for the next level. Hayden had 37 total touchdowns for the class 5A State Champs, and had a huge year through the air with 2,343 yards passing and 27 passing TDs. Dual threat talent also, Jay was a ground gainer to the tune of 453 rushing yards and 10 rushing TDs and earned All-State Honorable Mention honors. 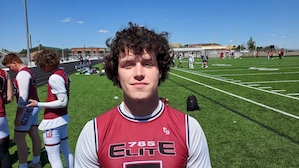 @BradyVanDonge
Has been one of the top arm prospects we have seen at several offseason events and camps this year, no doubt Van Donge has to be one of the top ‘24 class arms to know on the Kansas football scene.  Brady is a top athlete who reports a 31 inch vertical also, is one of the KC metro players that has a big upside, a QB that can drop back three steps and fire a nice strike down the field, is a quick read the defense type of QB that really sees the field in front of him well and then has the power arm to make the tough throws happen. Smart and poised QB that makes big plays and makes good choices  as a team leader. 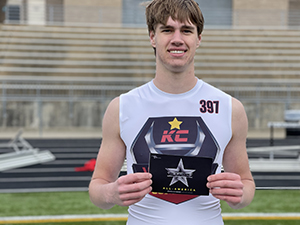 @cole_coonrod
6-6, 210 eye catching size for this line me up anywhere on the field and watch a big play happen type of Manhattan athlete, Coonrod can play TE/WR and on defense is a edge stopper with length and speed at OLB or DE. Coonrod has elite size without question at 6-6 inches tall, no many football players going to beat him for his next level frame and length off the edge. Coonrod has also shown some very good hands at TE and is a player that will look to be one of the more impressive play making TEs in the state as a senior hot recruit to know.

@HanksLukas
A great combination TE prospect in the 2023 Kansas class, 6-3, 245 Hanks is a pure bruiser and big man to take some big notice of from Washburn Rural High School in Topeka, Hanks should be one of the biggest TE prospects in his class and has the power and athletic skills that should take him a long way in his next level recruitment. Hanks is pure power in the open field, a rough and physical runner after he makes the catch, you can count on him to make those tough yards down the field, a guy good for 5-7 yards with his power and length in the open field after he makes the grab.  Good looking big man that has a huge upside to his game, power TE prospect to know in Kansas football. 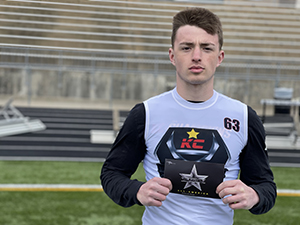 One of the Kansas City area WRs that is a speed threat and a guy that can really get up the field after the catch kind of offensive weapon to take notice of. Hicks reports excellent speed, a 4.1 time in the shuttle and a 4.6 time in the 40 yard dash. Also has rare WR strength and can bench press 255 pounds at 180 pounds, can be a very physical WR in the open field also that has speed plus strength making him one of the toughest down field play makers to cover in the ‘23 WR class. Hicks went for 804 yards receiving and was a do it all kind of weapon that added a level of versatility with 1,000 all-purpose yards, 13 TDs, 100 plus return yards and 130 rushing yards as well. 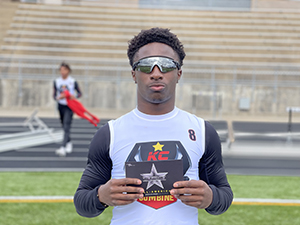 @_dariusjones1
Jones made the trip all the way from Fort Zumwalt West in St. Louis to the KC Varsity Combines and earned a trip to The FINALS All-America Showcase on May 29 at Liberty North with a strong performance He was a second team all-conference selection a year ago after recording 13 TDs and 1,002 all purpose yards, showing off a versatile skill set. Jones is tough in the slot, where he can take a short, underneath route to the house, is a strong physical runner out of the backfield with breakaway speed and can get behind a defense as a receiver. On Saturday he posted a 4.59 hand held 40-yard dash time along with a 4.18 shittle, 7.22 L Cone and 10’2 broad jump. Jones has been a standout with Boom 7v7 this spring.

@VKlote
Klote is a player with some good size and length at 6-3, 207 pounds from Raymore Peculiar,  Victor picked up recent offers from Peru State and Lincoln University and is one of the hot ‘23 prospects out there getting college looks and offers in the Kansas City area. Klote has some very good hands, really is a WR/TE that has the size and the soft hands to be a good pick up for the next level, one of those players that can make some very tough catches and haul it in, his combo size and hands make him a guy that should be a stock risers among targets in the 2023 class.

@AaronMc55544608
McGhee is a big target and just a class of ‘25 prospect from Lee’s Summit North High School at 6-4, 220, this TE and up and coming prospect has the frame and built to be a special talent in the next three seasons for LS North. Aaron has already jumped onto some college radars that like his size and ability to be an edge weapon for the offense.  Should be one of the more impressive up and coming risers to take notice of in Kansas City’s 2025 class of athletes who have impressive size.

@john_niesen
Niesen, the Kansas state leader for receiving yards (1,275) and that MVP type player for the Class 4A Kansas State champions at St. James Academy is clearly a star senior talent to take major notice of and at 6-3, 185 his length and rangy play making skills in the open field has been the source of many defensive fits and breakdowns leading to his catches and big time offense for St. James. Niesen earned Second Team  All-League honors in the EKL and had 64 catches for eight touchdowns as a junior in 2021. A track star kind of athlete also that has that break away speed you like to see at the WR spot to attract some impressive college looks and interest at the next level.

@brandt_pickrell
One of the most impressive looking ends in Nebraska football, Skutt Catholic’s ‘23 big man and lengthy Brandt Pickrell

Brandt
Pickrell
TE | 6'2" | 225
Skutt | 2023 is a 6-3, 213 edge play maker that should make a lot of noise in his senior campaign in 2022.  Pickrell can be a devastating blocker and is one of the most physical players in Nebraska football, with his 6-3, 213 frame, Brant can push and knock guys off the blocks and be one of those claim the edge ends that has power and excellent strength as a pure force. Brant has a unique ability to be a big TE that has great hands and can make some of those wow kind of grabs down the field.  A good route runner and a player that is so big and so physical that he is very hard to be able to handle in the open field for a DB or even LB to cover and make a play against.