Six Star Football takes a look at several prospects who raised their profile at Blue-Grey Combine in St. Joseph. 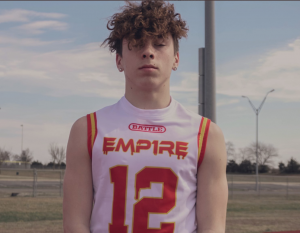 Here, Six Star Football takes a look at several of the top WR/TE prospects that competed at the event.

Caden Brinegar, 6-0, 170, WR, 2021, Marysville @CadenBrinegar
Ran an impressive looking 4.57 time in the 40 yard dash at the Blue Grey All-American Combine, Brinegar is one to take a look at among all the great athletes that play WR in Kansas, you have to see that Brinegar is among the elite tru athletes with the skills and ability he has, a guy that has a 35.3 inch vertical and runs a 4.55 in the 40 and is 6-0 tall which tells you he can really get the ball at its highest point.Very good hands and a quick and smart play maker on the football field. Earned All-League and All-District honors, also was All-3A All-State non senior HM honors. Had 19 receptions for 226 yards and on defense had 25 tackles.

Michael Canseco, 5-7, 141, CB/RB, 2023, Olathe North, @canseco_michael
A 4.6 turned in the 40 yard dash at the Blue Grey All-American Combine, its speed time when you see how fast this young 23 prospect can bring on game day. Canseco is one of those names you keep hearing about in the class of 2023 as a special one in the Kansas City metro area. A play maker that has speed and great instincts when he is on the football field.  One of the players that really can play like a veteran already with his skill set and a guy that has some of the best potential in the Kansas ‘23 class. Had 367 all-purpose yards, 4 INTs, 6 pass break ups and 2 forced fumbles out of the secondary unit and we think he is one of those great looking play makers in the 23 class, a player that makes fast plays and makes them often, Canesco is one of the best.

Tristen Everard, 6-0, 160, WR, 2021, Blue Valley Southwest @EverardTristen
Everard, who tied for the top broad jump among WRs with 9’10 at the Blue Grey  All-American combine,  is one of those WR’s in the class of 2021 that we think really has the potential to explode for a monster season this year and at 6-0 has some height along with being a good route runner and speed no question as a key focal aspect of hit success.  Posted impressive 2019 season figures of  63 receptions, had 647 yds, and had 475 return yards.  One of the best open field targets and play makers in the area, Everard is a player that is one the rise and a player that we come into the 2020 seasons with high expectations for.  A very talented play maker and athlete for Blue Valley SW.

Hayes Manning, 5-9, 170, WR, 2021, St. James Academy @manning_hayes
Manning’s 4.6 time in the 40 yard dash tied for third fastest among WRs with a 4.6 clip at the Blue Grey All-American Combine.  Hayes is a very talented KC area prospect at St. James Academy, a guy that shows you don’t have to be a big WR to be a very good one at 5-9, 170 pounds.  Manning runs a 4.7 in the 40 yard dash, solid speed and has some very good hands, among the best in the area.  Also to like Hayes quickness and sound footwork as well.  A natural play maker always capable of the next big play and a guy for St. James Academy that can punish once he has the ball in his hands.  Likely to get a lot more opportunities this senior year, but made the most of each opportunity in 2019 with a 18.7 per catch average. 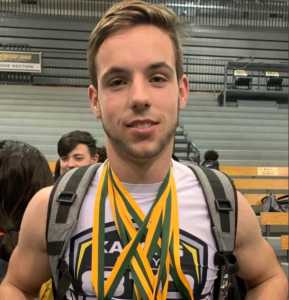 Tyler Reishus, 5-11, 175, WR, 2021, Mill Valley @TyReishus19
Leader at the Blue Grey All-American Combine with 16 reps on the bench, no question could be the most powerful WR in Kansas, can’t say enough about the pure athletic ability and how strong and impressive as a well  rounded  athlete Tyler is, add in a tremendous work ethic and you have one very tough to defend against top notch prospect in the KC metro area. Tyler, who has offers from Offers have come from Graceland and Rose Hulman, earned All State-HM, All EKL-HM, was a State Track Qualifier and was a 2X State Powerlifting competitor. A huge part of helping Mill Valley claim the 5A state title in 2019 and with his talent back and a load of good teammates don’t be surprised if the title goes back to Valley again in 2020.

Woodrow Rezac,6-0,155, WR, 2021, Rossville
Rezac, a player that has the fastest 40 time at Blue Grey All-American Combine in his session of 4.42 and good looking 9’6 inch broadjump is  a fine athlete for sure and is a play maker with solid 6-0 frame that can go up and make some big plays for a team that will look to air it out big time again in 2020.  Woodrow looks to reap those benefits as a big play maker and a senior leader for the offense.  A guy that loves to turn the corner and the edge and make some very good speed plays down the sideline for Rossville.

Keelan Smith, 6-2, 187, WR, 2024, Bishop Miege
Smith is a prospect that is coming up in the 2024 class and for sure you can’t ignore some of those key signs of talent, not to mention that fact that he is already 6-2 as a freshman in 2020, so you can tell he could get even bigger and have elite size.  A player that looks to have good hands and some nice big play capabilities.

Dale Stout, 6-3, 180, WR, 2021, Olathe North @DaleSto94656602
With the second fastest shuttle time (4.15) among WRs in the AM session at the Blue Grey All-American Combine, Stout is a fast feet play maker that could end up becoming the elite big WR in Kansas this year, really has that size and talent and we think is among the most underrated prospects, a likely guy to make the most of his time this year and more of a go to senior in 2020 after coming off a very fine junior year in 2019. HIghly acclaimed, Stout earned HM All-Sunflower honors and scored 15 TDs on the year to go along with 30 receptions for 591 yards and a 19.7 per catch average.  Size and talent show through again and again with this big man and target for Olathe North. Olathe North has a ton of offensive firepower and weapons this year, plus huge WRs and Stout is one of these go to big time type athletes to watch out for.

Tyson Struber, 6-3, 185, WR, 2022, Canton Galva @StruberTyson
Rocketing to the top PM time among WRs at Blue Gray All-American Combine in the 40 (4.44), Struber has blazing like speed.  No longer any type of secret that Struber is among the elite looking WR recruits in Kansas, two years left and a Kansas State offer on the table tells you all you need to know about this big 6-3 two way WR/DB prospect that is taking some names at Canton Galva. Very active and athletic play maker that really shows just how talented he is play after play.  DB that was outstanding as well with 53 tackles with 43 solo, 20 assisted and had seven Interceptions and one pic 6 along  with a kick return for a touchdown.  Good looking super sophomore season with 33 receptions and 780 yards receiving, ending the year with 16 touchdowns.

Dawson Williams, 6-1, 170, WR, 2021, Perry Lecompton
A player that shows he can run some good routes, a WR that has a knack for finding ways to get open and uses his speed well after the catch.  A good hands guy that is always a player that can haul in the big play and with a 6-1 inch frame also holds that edge over many smaller DBs that struggle to make plays against the bigger Williams.  Well rounded WR that will look to have a very good senior season for Perry Lecompton. 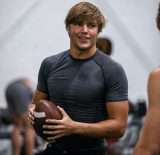