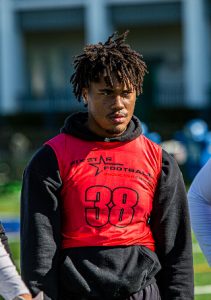 With the upcoming season now underway, Six Star Football takes a look at several rising OLB prospects who stood out in the early going.

@ArnoldTerryIII
Its no wonder Arnold had a visit to Alabama for a Junior Day, with his motor and high octane defense at North Florida Christian, this guy has huge potential as a junior play maker and proved that in the opener with 17 tackles and 10 solo with seven assisted and one tackle for a loss.  One of those guys that is fast and powerful, can slide at outside of middle spots at backer and is a very talented guy that is smart on the field and an athlete that is a riser in his junior class to know.

@RicoFreeman260
Boca Siege 2023 OLB Frederico Freeman showed why he is one of the state’s biggest breakout prospects in the Tampa region on Friday in the Pirates’ 27-0 win over Seminole. Freeman has a huge frame and plays even bigger than his listed 6’3, 217 height and weight and shows terrific athleticism in the open field, able to cover ground quickly, help set the edge, or rush the passer. He made several huge plays against Seminole, including on special teams where he blocked a punt and took the ball into the end zone for six.

@JacobDyers
Belleview 2024 ILB Jacob Dyers put together a strong performance in a week 1 win over Lecanto on Friday, recording 14 tackles, including six for loss. An early season dominator, Dyers is doing a nice job of beating the offensive blocks to the football and being a key play reader in the heart of the Belleview defense.  One of those guys that will be a leader on the defense and a player that plays smart and aggressive football from his backer spot.

@gunn_813
If you don’t know Jaron Gunn yet from Tampa Jefferson you soon will, looking like one of those take over kind of backers this year and a major leader for tackles in the early going, Gunn had 19 tackles in the season opener for Jefferson and is a play maker that is a just a sophomore, a hot class of ‘25 outside backer, no doubt Gunn  took away several big plays and was able to be a major contain and play reader as a hot Tampa sophomore on the watch for radar.

A talented all-around linebacker prospect, American Heritage (Delray Beach) opened the season with a strong performance against Tradition Prep as he recorded ten total tackles and a sack. He was a standout performer at the Six Star Football Florida Showcase at Somerset Canyons in the spring, and has since taken his game to new heights. He has a strong, physical frame at 6’1, 210-pounds, and reads plays quickly as they develop and attacks the ball carrier. Also a strong student, Lampkin reports a 3.70 GPA.
.
.
.
.

@JeanTanelus
Tanelus, who earned a Stetson offer in August, is no doubt  looking to make a name for himself more and more and raise is college profile and interest and did just that in week one for Naples against Lehigh in their 45-9 big win-.  Tanelus was all over the football field and finished off a huge week one with 16 tackles and had 12 solo and four assisted tackles as a guy that is looking more and more like one of the top senior tacklers in the state.