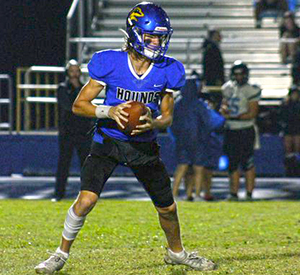 Orlando area QB risers and hot prospects to know – We look at some of the top underclassmen coming up in the 2024 and 2025 classes that are area names to know at Quarterback.  Players like 6-4 impressive runner from Lyman Will Burke head a list of key play making QBs in the Orlando area. Taylor Crane was a leader in the 8A Division for passing yards and just a ‘25, this freshman already is getting D1 attention from Florida State and Central Florida just to name a couple.

@willburke2024
One of the best looking super sophomore QB prospects coming up in the Orlando area, Burke is 6-4 inches tall and 180 pounds. Burke is a very impressive runner with the football in his hands, a big man that has proven to be a big time running threat when he has the ball in his hands, moves well, and is powerful also, dangerous combination for defenses looking to try and stop Burke from making the next big play with the ball in his hands. Burke had 354 passing yards and is a pocket passer that makes guys miss in the pocket, one of those QBs that can extend plays well also.  Burke is a hot name to know  among the Orlando area’s top QB prospects to know.

@taylorcrane01
Crane could be the most athletic play maker at QB in Orlando, and for sure has really made a big time name for himself with a huge junior campaign at Evans High School. Crane is one impressive dual threat QB prospect that can run and throw with the best of the  best and is a play maker that has a very quick release and has a smooth ball and can find his targets quickly.  Crane went 40 of 82 passing and had 558 yards passing.  He has made D1 visits to Central Florida and Florida State and is no doubt one of those D1 prospects that has a major versatility mark on his resume for talent, speed, and arm strength. Crane was ranked tops in Division 8A football for passing yards this season.

@TylerDinga
On a team loaded with some impressive quarterback talent, Dinga may well be the QB of the future and this sophomore has the size also at 6-2, 195, Dinga is a player that has been a nice thrower and very good at getting the ball out while he is pressured and on the run, one of the tough young QBs in the area under pressure and a guy that  can also run the ball very well also.  Dinga could be the dual threat QB of the future at Bishop Moore and has the talent and skills to be a major name to know in the ‘24 QB class.

@Future_eraTrev
Looking at guys that look the most athletic coming up at the quarterback position in the Orlando  area, Jackson sure does fit that mold for being a major athlete who is playing QB for West Orange.  Already 6-2 inches tall also,  Jackson could gain a few more inches and really be a bigger QB prospect to take notice of as well. Has a very  fluid arm and sees the field very well, nice touch an a guy that can locate and make the big throws when he needs to under pressure.  A great arm with range be it a short ball or a deep downfield ball, Jackson does it all at a very high level. 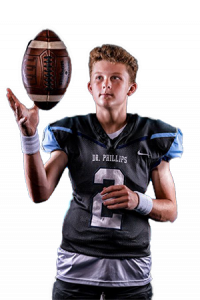 @Jurgensen17
Jurgensen was a freshman  this past season at Dr. Phillips and may become one of the ‘25 class throwers to take some notice of soon for his talents. Bjorn gained a lot of experience gained. On a team loaded with talent it will be interesting to see how Jurgensen develops in the coming years, no doubt the Dr. Phillips program is always loaded with some major talent and speed.  Who will be the QB of the future, Jurgensen with experience and time could be a name in the mix of the programs arms to take some notice of in the coming seasons.

@JacobKania_QB
Kania is a rising class of ‘24 QB in  the Orlando area, a player that is a major talent as  a pro style QB prospect coming up.  Kania has a powerful arm and is a QB that can really throw the deep ball well, good at ball placement and when he  needs to he can run and avoid being tackled for some key extra yards as well. Kania impressed in  2021 with 1,175 yards passing, 18 touchdowns, went 106 for 162 for a big time 65.4% completion percentage and passed for 190.6 yards per game in his nine games of action as a sophomore.

@cameron_kurzon9
Despite not being the biggest guy on the football field, Boone’s Cameron Kurzon could be one of the quickest with the ball in his hands and could be a good one coming up to know in the Florida ‘25 QB class.  Kurzon is a play maker that is impressive under pressure and makes some good plays and is one of those guys that can use nice touch on his passes and drop the ball in very good spots for his targets and receivers to make the key catches they need to move the chains and create big yardage plays down the field.

@elijahmrooney
A bigger 6-4 inches tall and 197 pounds, Rooney is just getting started on what looks to be a big career ahead at Wekiva. Rooney made the most of every snap in 2021, and in just eight quarters he had 632 yards, three touchdowns passing and added two rushing touchdowns and had 175 rushing yards.  No doubt a dual threat guy that can do it all well, Rooney has size, some good feet and a power arm for the future to watch out for.  Experience and more time should equal some huge numbers and give Rooney a big chance to become of the hottest QB prospects in Orlando in the 2024 class. Rooney also reports a 3.9 grade point average in the classroom.

@tyslain7
Slain is one of the better looking arms in  the Orlando area and a hot sophomore prospect for the radar, no doubt unique also being a lefty on the field.  Slain is a very good on the move thrower, busy footwork in the pocket, never a standing there waiting for things to happen QB, Slain goes for being on the move and slinging the ball in there to his targets down the sidelines and is a player that has a powerful arm and loves to be on the move and make the big plays happen.  Smart and impressive with the ball in his hands, a top notch looking ‘24 QB prospect for the radar.

@mercerstjohn1
Boone no doubt has a lot of offensive firepower for pure talent and speed and one of those guys that looks to be an emerging star in sophomore QB Mercer St. John, a player that has waited behind seniors and will be looking to prove himself in a big junior year in 2022.  St. John is a play maker and a guy that could be one of the top leaders under center in the 2024 class for the ‘22 season ahead. A very strong arm, St. John also is an excellent student who reports a 4.85 grade point average in the classroom.