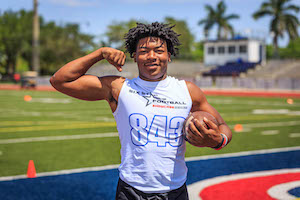 @Caleb_Chambo
Palm Beach Gardens 2024 Caleb Chamberlin is an impressive combo package play maker that can plays OLB and FS for the Palm Beach Gardens defensive unit.  Had a very fine sophomore season in 2021, Chamberlin had 63 tackles and four passes broken up.  One of those guys that can make some great plays on the ball and a very impressive and very active tackler to watch out for as well. Chamberlin covers a lot of ground quickly in the secondary for PBG and breaks well on the ball. Also a standout student, Chamberlin reports a 3.9 GPA.

@GuyEdmondJr1
A standout performer last May at the 2021 Six Star Football Florida Showcase, The Benjamin School 2024 Guy Edmond is poised for a breakout offseason and is a player to watch next fall. He saw some varsity action as a sophomore recording  16 tackles in his nine games of action this season at the Benjamin School and is one of the up and coming young standouts in the sophomore class.  This 5-10, 176 playmaker has  a quick open field burst of speed guy, Edmond excels at making up a ton of space and ground and is a top closer in  space that can make some huge plays happen.  He announced his decision to attend Cardinal Gibbons on Dec. 17.

@Knight6Rick
A two-way prospect for The Benjamin School, 2024 Ricky Knight showed promise in three varsity games in 2021 as he recorded 13 tackles in  three games of action this year from his secondary spot. Knight is one of those breakout types of play making athletes to know and watch. and is already on the major D1 radar as he has made a visit to Tennessee, and will likely have lots of major college looks and interest in the coming years.  A very athletic playmaker that is fast and has great instincts from the defensive backfield.

@Mikail_Lee4
Also a basketball standout to watch, Dwyer 2024 Mikail Lee is pound-for-pound one of the most physical and tenacious prospects to watch as the 5-9, 146-pound corner plays much bigger than his listed height and weight would suggest. Also a slot receiver, Lee is terrific at reading plays as  the develop and can break quickly on the ball and make plays. He is an underrated tackler in space and has terrific open field speed. He figures to be a player to watch this offseason.

@gocrazy_josh
A three sport standout who also excels on the basketball court and track and field, Carson Newman 2024 Josh Philostin is coming off a strong sophomore season for Cardinal Newman as he recorded 27 tackles in 12 games and helped the Crusaders to a 9-4 record. Philostin has good speed and is very strong for his size.  Philostin is also a track star and runs the 200 and 400 meters, and the 4×1 and 4×4 relays  at Cardinal Newman.  Philostin shows terrific footwork and technique at corner and has shown good promise at the WR spot with some great hands and speed on that side of the football as well.

@BraylonVincent
A very impressive athlete, can play SS or CB along with being a natural athlete, Vincent uses his track speed on the field to be a shut down DB.He was productive as a sophomore for the 9-4 Crusaders, finishing sixth on the team with 49 tackles in 13 games, and added eight tackles for loss, two sacks, three INTs and five pass break-ups. At 6’0, 160-pounds, Vincent has a long, rangy frame with potential to add good muscle and size to his frame with age and continued work in the weight room. He runs the 200 and 400 meter for Cardinal Newman in track and is one of those players on the field that is hard to match up against if you’re an opposing WR prospect.  Also a strong student, Vincent reports a 3.7 grade point average.

@JenorrisJ
Glades Day 2024 Jenorris Wilcher led  the Gators with 86 tackles this year, including 13 tackles for losses, two sacks, and an interception.  A very speedy play making athlete, Wilcher of Glades Day uses speed to be all over the field and be a key play maker for Glades Day.  Jenorris is one of those corners that makes a lot of excellent reads on the ball, hard to throw against, plays smart and fast and can be a guy that is all over the field making big time stops and tackles.  Wilcher is a player that can also be an extra pass rusher and makes several key plays on the QB and or stops against the run as an extra container play maker with speed. He also made an impact on the offensive side of the ball, rushing for 601 yards and nine TDs, while hauling in 14 passes for 303 yards and two TDs in 11 games.

@MichaelEugeneF4
Wright figures to be a major factor in class 8A football for Palm Beach Gardens Community High School as he showed promise as a hard-hitting safety and playmaking wide receiver and has, earned a reputation as a young up and coming talent in the sophomore class.  Wright reports a 4.6 time in the 40 yard dash and is a playmaker that can come up against the run and be a major force also, a good downhill play making defensive back that can make some huge plays on the football. He has taken a visit to Florida State and is likely to draw significant Division I interest over the upcoming months.