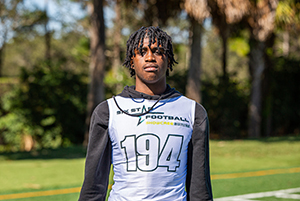 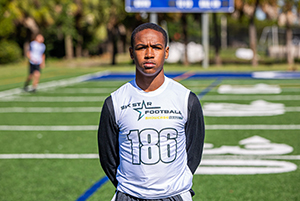 Zamarion
Albritton
CB | 5'10 | 140
Sebring | 2024, 5’8, 140, CB, 2024, Sebring @ZamarionAlbrit1
Albritton has the makings of being a very fine prospect coming up at Sebring and was a standout athlete that looked like one of the top performers  at the 6Star Football Showcase, expecting some big things from a guy with his talent level.  Albritton is a very smart and heady play making corner for Sebring High School, he is one of those great anticipators of plays and passes, one of the most dangerous looking corners out there, Albritton really  does a great job of reading and reacting and then quickly jumping the routes and passing patterns and can step in front of the pass and take it the other way.  Hot looking ‘24 prospect and corner for the risers radar to know.   Racked up 23 tackles in  10 games for the Sebring secondary unit in 2021. 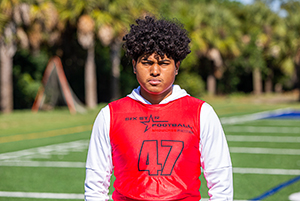 Corey
Baugh
S | 6'0 | 185
Monarch | 2023, 6’0,185, S, 2023, Monarch @coreybaugh6
One of the most impressive looking athletes at the 6Star Football Showcase, lined up as a safety and can play backer as well, no doubt one of the impressive standout play makers at the event and a player we have on the high radar watch list for defensive standouts to know in the 2023 class. Baugh is a very fast play maker and a key speed guy for the Monarch defense.  Can play both defensive back and linebacker and is one of the risers to watch out for on defense in the 2023 class for Broward area standout names to know.  Baugh is a very explosive play maker to the football and really does a nice job of timing his hits on the football and making impressive plays on the ball.  Very fast and speedy, one of those guys that plays up and is excellent against the run and can use his speed to blow up one big time play after another for the Knights defense. 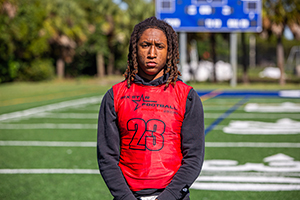 Jaden
Blackburn
DB | 6'1 | 180
Cardinal Gibbons | 2023, 6’0, 170, CB, 2023, Cardinal Gibbons @J_blackburn28
Blackburn is one of guys that will be a senior veteran and leader for the Cardinal Gibbons program in 2022, and was a guy that impressed and showed us he should be a mover up the rankings as a key riser with some of the talent you like to see from a junior entering their last year of ball at the highschool level. A very aggressive play making corner from Cardinal Gibbons, Blackburn is all over the field, a great closer with speed that does a nice job coming down the line against running plays and can blow them up before they get started.  Also this corner can really do a nice job of playing tight coverage and being that guy that can bat passes away and uses excellent position in the open field to make plays against the pass and shutdown his assignments. Blackburn had 22 tackles in seven games for Cardinal Gibbons this past season. 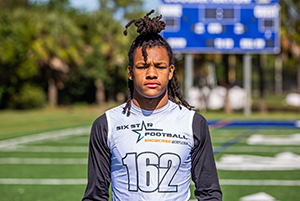 Jacob
Cosby-Mosley
S | 6'0 | 170
The Benjamin School | 2024, 6’0, 170, S, 2024, The Benjamin School @jcosbymosley
Cosby-Mosley is one of the more talented athletes out there and just a ‘24 class safety, he is tough, fast and physical, all traits he really showed out with at the 6Star Football Showcase. Is a very smart play making safety with big time speed at his position, also a huge weapon on special teams that uses that huge speed threat to be a good looking game changing return specialist in the Benjamin lineup.  Fast on the field and a player that can make a huge impact for his team, no doubt one of the more athletic speed guys we have seen and a play maker with a huge junior season expected for 2022. Had 43 tackles in twelve games this season for the Benjamin School. 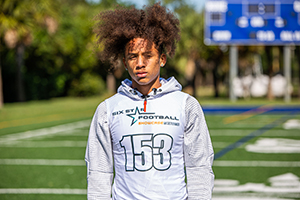 Josiah
Fagan
S | 6'1" | 165
Coconut Creek | 2023, 6’1, 165, S, 2022, Coconut Creek @hotsaucesiah
A very talented senior that we saw at the 6Star Football Showcase and could tell that he should be a college radar maker with his talent, a senior and one of those great finds for a college program looking for some speed and size that impress. Fagan, one of the senior class of 2022 prospects for the college radar, is an impressive downhill play making speed safety that loves to come up and play like a hard hitter closing linebacker, big hitter, fast and quick  to the football and one of the more athletic  defenders on the team and in the lineup for Coconut Creek, no doubt Fagan is a fast flyer to the football and one of those senior safeties that should be grabbing some next level college offers and looks along the way. 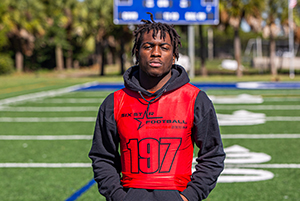 Lamont
Harding
S | 5'9 | 175
Deland | 2022, 5’9, 175, S, 2022, Deland @b1gguno
One of the very impressive looking class of 2022 senior defensive backs that was in attendance at the 6Star Football Showcase, Harding was impressive and a player that has excellent looking footwork and you could see he could be one of those guys that is a college radar maker with his athletic  skills and ability to get back and make a big play, good closing speed and a player that can be a speed threat in a college secondary unit. Impressive ‘22, player on the watch list to know for the next level. 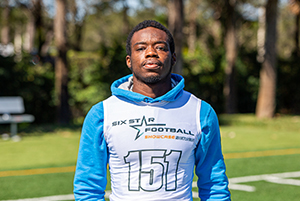 Aidan
Norcius
S | | 175
Dillard | 2023, 175, S, 2023, Dillard @Aidannorcius3
Norcius is a good athlete that had the top broad jump mark among safeties at the event at 9’0.  His 32.5 inch vertical was also best among all safeties at the Showcase and ranked third overall among all defensive backs there.  A very talented and athletic play maker that has been a versatile athlete and a key play maker that is fast and among the most athletic guys we saw at the 6Star Football Showcase event. Love the speed and athletic skills from this two way safety and WR prospect in the 2023 class from Dillard High.  Norcius  style of the game is that he has some impressive and great route running skills and is a very aggressive hands play maker on  both sides of the football, at WR Aidan can read the defense cover and he knows how to sit in between holes when he is  running his  routes. Aidan is a wide receiver and slot that had 19 catches and six catching touchdowns and holds one offer from Florida Valley Prep. 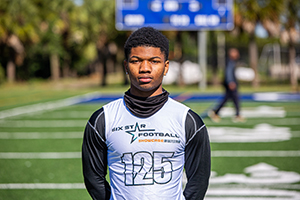 Ar’Travious Pearson, 5’8, 158, CB, 2025, Sebring @1missionD
Pearson was a good looking speed burner at the 6Star Football Showcase, no doubt one of the Sebring standouts that looks to have a very bright future in front of him and is just a class of 2025 play maker that is one of the guys that showed he was impressive already and looking to be a major impact maker in the immediate future.  A very impressive looking play maker, his speed was on show and really turned some heads from his corner spot.  One to know coming up at Sebring High School.

Remington
Roberts
S | 6'1 | 176
Westminster | 2024,6’1, 175,  S, 2024, Westminster @RemingtonRober3
One of the very impressive looking safeties at the 6Star Football Showcase, Roberts is a player that was a key enforcer this year and will be looking for another huge year, excellent footwork and one of those very heady and smart players you love to have in the secondary unit for the big plays. Roberts will be one of those key play makers coming back at Westminster and a guy in the secondary unit that will be key in stopping the passing attack in 2022. Roberts is a good looking built 6-1, 170, some height that can help in the open field to make some big plays while the ball is in the air.  Roberts had 23 tackles in eight games and was among the top underclassmen for tackles on the team this year. Had 19 solo tackles and four assisted tackles on the 2021 year as a sophomore to know. 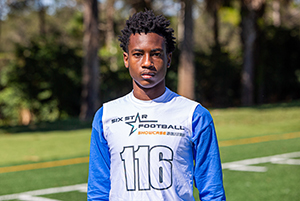 Cedric Rolle,  Jr., 5’8, 145, S, 2024, Somerset Canyons @cjfromtha3
Good looking play maker, one of the loaded for potential kind of DBs at the 6Star Football Showcase, Rolle has that talent to be as good as he wants to be from the secondary unit.  Rolle is a very good open field play reader of the football from his safety spot and has some good speed and open field instincts to be a key play maker in the coming year for Somerset Canyons.  A good open field tackler as well, Rolle has the speed to be one of those catch you from behind DBs that could prove very valuable in 2022 as a junior play maker from the secondary unit to watch out for.  Good looking athlete and a talented play maker to know in  the 2024 class at Safety.

Rodollo Rostemus, 6’1, 160, S, 2023, Somerset Canyons  @RodowitdaTool
A very impressive looking athlete at the 6Star Football Showcase, lean and fast, also being 6-1 Rostemus could be a guy that really emerges as a bigger DB for Somerset Canyons that can be a nice impact maker and go up and compete for ball and make some key plays and picks in 2022.   A name that will be a senior in the lineup and a player that could be one of the players that will be a defensive key in the upcoming season with his size and skillset. 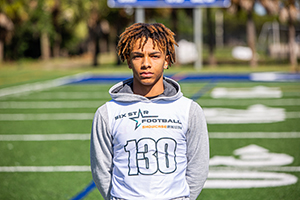 Jaydon
Tarohocker
CB | 6'1 | 160
Riverview | 2023, 6’1, 160, CB, 2023, Riverview @Tarohocker23
Jaydon had the top vertical mark among all corners at the Showcase with a big time 34 inch mark. Big time talent that can sky at the corner spot for Riverview.
Jaydon was one of the most impressive looking athletes at the 6Star Football Showcase, no doubt a very lean muscle defensive back that is one of those play makers that can run with anyone and can use his impressive natural athletic skills to be a enforcer in the Riverview secondary unit, Tarohocker was one of the guys that showed some excellent footwork and is one of the class of 2023 play makers we see having a huge senior campaign.