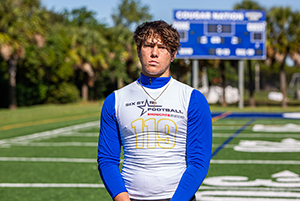 FLORIDA SHOWCASE COVERAGE | Talented QBs that shined in Boynton Beach (2023) – We look at some of the  impressive QB talents to know in the rising 2023 class who made noise at the annual Six Star Football Florida Showcase on Jan. 29 at Somerset Canyons in Boynton Beach. 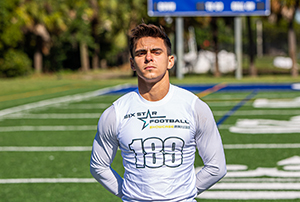 @qbthomasaponte
One of the QBs that attended the 6Star Football Showcase that has some of the top potential to make a big impact in 2022 as a senior leader at Everglades Prep.  Big things are in store for this play maker for the 2022 season. Aponte is a player to know in the Florida junior class, this Everglades Prep arm will be a senior leader looking to help the Panthers offensive thrive in his final season in 2022.  Aponte played in eight games this year and was a player that gained valuable experience and will look to use that as a senior offensive leader in 2022.  Aponte will be one of the key returning play makers to know on the team and is a name that will be looking for a big senior season come 2022.  Has been in communications with several D3 and NAIA Schools.

@furney_robert
A guy that impressed us at the 6Star Football Showcase, this  impressive arm from Spanish River is a player that really was fun to watch with his powerful lefty handed throws, a guy that has a arm to take some major notice of heading into a big senior season in 2022. Furney is one of the biggest looking junior QBs in Florida, this 6-5, 235 pound big man at QB is impressive and is a big name to know among top arms in Florida, Furney is a lefty, and this southpaw has a major gun for an arm, really can toss it down the field with the best of them and is a major talent for having a top deep ball arm in the Florida ‘23 class.  Looks like a guy that will have a huge senior season and be racking up some major yards again in 2022.

@QNiemann14
A very impressive ‘23 play maker that is one of the top play makers and really has a knack for making smart plays, heady QB that really showed he was a ‘23 to have on the high radar at the 6Star Football Showcase. Niemann is one of the hottest looking up and coming QB prospects on the radar in the 2023 class, loaded for talent at Lake Minneola, Niemann does a very nice job of finding the open man down the field and is a good field general that moves the chains and is a very impressive looking team leader.  Makes good choices and passes and can see the entire field very well and what is developing in front of him to make the key plays and passes with the ball in his hands. 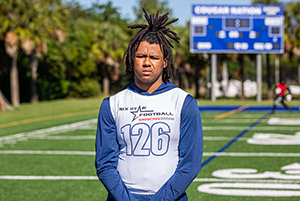 @Rowe2Quincy
Rowe was one of the biggest QB prospects at the 6Star Football Showcase, a towering 6-3, 225, no doubt this guy has the body to be a next level QB and is a guy that impressed at the 6Star event. Rowe is a play maker that can become one of the guys to have on the radar as a senior entering 2022, one of the players on offense that has a lot of potential and will be looking to make a big senior season happen and open up some college doors in his recruitment. 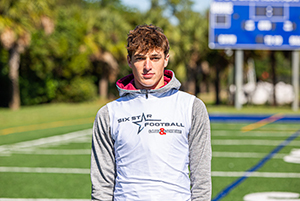 @SamuelWooley2
Wooley was a impressive performer and a nice arm to really see what he could do in action and was a player that made the throws you want to see if you’re a college program looking for a quick release and a ball on the mark.  Wooley, a 6-1, 160 junior QB prospect from St. John Paul, is a big time arm to know and a player that is on the verge of getting lots of college interest and looks.  Wooley has been  one of the hardest working names for the Eagles and is a player that has some impressive talent to watch for. Impressive looking shotgun QB with a nice strong and accurate arm, really has some impressive passes over the middle that give his WRs a good chance to make some extra yards after the catch as well.