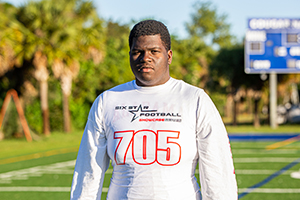 @ChristopherA_61
One of the big men with a great trench build, 6-6, 311 no doubt that Alexandre has the size to be a D1 lineman for sure and he looked impressive in a big time way at the Showcase, a powerful player that used his size and leverage to his advantage and was one of the big men in the 2023 class that we really think could make the Dillard running attack a special one again come 2022 as he will look to be one of the top big men seniors on the line and a name to grab college attention with his overall size on the line. 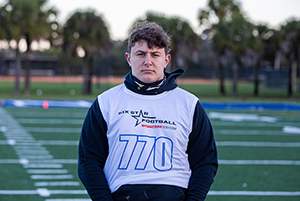 @ColosiJoey
One of the elite performers at the 6Star Football Showcase, you can tell his toughness and work with his aggressive hands make him a high radar maker in the 2023 class. Will be a key senior big man to take notice of for American Heritage in 2022 and was one of the big men standouts at the Showcase.  Colosi is a very impressive tough guy in the trenches out of the big time program at American Heritage.  Colosi, a big 6-1,  275 pounds, is one of the prospects in the 2023 junior class that has really impressed us from his position at center and is one of those guys that has been a major leader and impressive looking blocker up front to take some major notice of.  Colosi was named the 2020 Patriot Award Winner and helped American Heritage to a 2020 state championship. 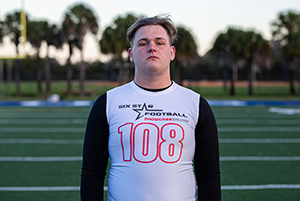 @CotneyWilliam
Cotney is a big man that impressed at the 6Star Football Showcase, 6-2, 250 pounds, Cotney was one of the most experienced big men at the event and it showed.  Cotney is  both an athlete and a smart player on the OL, you won’t fool him or be able to get past him with his  toughness and ability to use some good footwork as well.  Cotney is a very impressive two year starter from West Port High School, 6-2, 250 pounds, William is a big man that has been a two year starter on both the OL and DL in 8A Florida high school football as a freshman and sophomore.  William was a team captain as a sophomore and earned the scholar athlete award last year.  Big man that has lots of experience entering a big senior season  ahead and a player that has the talent to rack up some college offers as well. 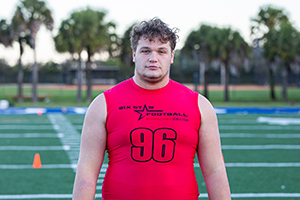 @harrisongreen75
Green was one of the top talents at the 6Star Football Showcase, no doubt also one of the most impressive for pure  college ready football frames at 6-3, 305, Green is a take no prisoners kind of big man talent that is very tough and physical in the trenches and a big man that can take over the guy with those blow the defender off  the blocks kind of power and motor.  All the makings of being a hot college recruit, Green will look to have a monster season ahead for Aquinas.  Green earned Sun Sentinel and Miami Herald Second Team All-County honors for his big junior season in 2022. 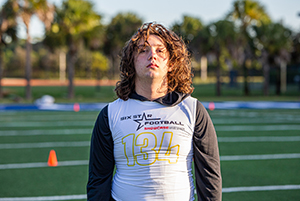 @maxwell_hurd
No doubt a good movement man on the OL, Hurd had the best 40 yard dash time among OL at the 6Star Football Showcase with a time of 4.98. Hurd is a player that can make things happen  in the trenches and showed just that at the 6Star Football Showcase, powerful and a good hands guy, Hurd really is that guy that stands his ground with the best of the  best and is a hard player to just move or push out of the way. No sacks allowed for the 2021 season for this impressive and overpowering offensive lineman at Windemere,  Hurd at 5-11 235 is one of the toughest pound for pound matchups in Florida, a very aggressive guy with his hands, Hurd likes  to get into the defense quickly and really fires off the ball quickly and does a nice job of getting into to the DL and driving him out of the play to create some huge gaps and holes to run through for his offense. 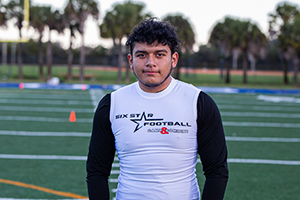 @mmejia2004
Good looking big man prospect at the 6Star Football Showcase, Mejia is part of the very talented Western High OL and is one of the guys that is a fine pass blocker, really can be that guy that his QB has a lot of confidence in will have his back  and make the big blocks.  This impressive 5’11, 220 Offensive lineman from  Western really gets the most out of each and every snap and is a player that can overpower guys bigger than he is to make some holes and room for his offense to make key runs down the field.  Mejia plays right and left tackle, preferably right tackle. His playing style is a combination of strength, toughness, good character and athletic ability. Matthew’s best skills are when he is pass blocking mainly keeping the end/ edge rushed away in the outside, however during run blocking Mejia can get a good drive on the defender opening a gap. His bench is at 235,  squat is at 330, and his deadlift is at 435. . 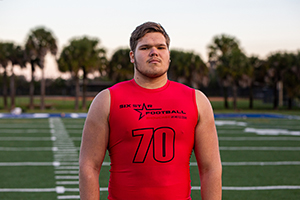 @therussianbu11
Ots was one of the Orlando players that really made a big impression on us for his size and motor plus intensity level at the 6Star Football Showcase, no doubt some big men have that get after it style of play you can’t teach and we like Ots ability to be right there for being an in your face tough guy to know entering a big senior season in 2022 at Boone. The big man from Boone High School can play both tackle and guard on the offensive line.  Ots at 6-4, 290 is a big man for sure and can use his size to shove, push and knock guys out of the way for some impressive holes to open on the offensive line. Very physical and loves to put guys on their backs, is a pure power OL and a guy that can use his strength and leverage to be a big time dominator.  Big man in Orlando to watch out for and a nice riser to keep an eye on for sure.  Having a big offseason, Ots has been in contact with UCF and can bench press 315 pounds five times. 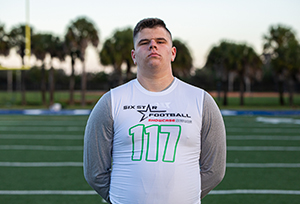 @RogerR_72
Reyes was impressive and had the best vertical among OL with a 22.7 inch mark at the Showcase.  Reyes is a 6-4, 270 big man that was  no doubt one of the guys you could tell could dominate and use his size to his advantage on the field to take over and claim his space as a big man in the trenches. Looking for a big senior season and from what we saw could emerge as a big enforcer up front for 2022. Reyes is a big time looking Right Tackle and prospect from Western High School, really uses his powerful hands well and is one of the most aggressive big men in the trenches that you will find. Reyes, has nice leverage at 6-4 and can overpower guys and toss them to the side, loves to get physical and can be a bit nasty in the trenches, outside edge blocker, size, power, can move in space well and is one of the better looking OL prospects we have seen.  Reyes was recently named First Team All-County on the OL by the Miami Herald. 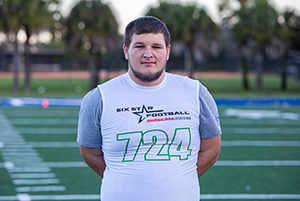 @tyrobbins18
The big man from Somerset Canyons is a player that will be a key member on the OL and a senior leader that will be looking to use his size and power for a big senior year.  Looked very good in action at the 6Star Football Showcase and is a player that at 6-1, 268 has toughness and power.  Robbins is a big man at 6-1, 265 and will look to be a senior leader in the trenches for Somerset Canyons entering a big senior season in 2022.  Robbins has power and toughness and is a player expecting a big senior season ahead.  Ty also can play Nose Guard and is a player that can rack up some impressive tackles as well.  Big man on the radar to keep a watch on, could be a key senior big man to know for 2022. 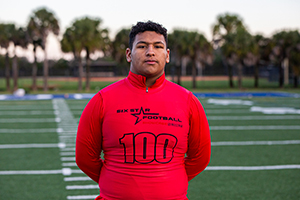 @hamlet78132551
Big man that was impressive, 6-0, 300 one of guys that was toughest to get any good movement against, Rodriguez was like running into a big wall, really does a nice job of using his power and size to dominante and is one of those prospects that will be looking for a very big senior season in 2022 at Manatee. A very impressive looking center that is one of the most dominant looking big man out there, 6-0, 300 pounds and a huge center on the offensive line that is tough and loves to get into the defense and hammer on them all game long and wear his man down with brute toughness  and impressive hands work in the trenches,   love his high motor all game long and his ability to move his feet and make some nice downfield blocks as well. 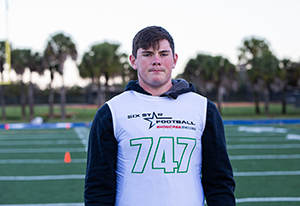 @WalshConal
Walsh was one of the big men at the 6Star Football  Showcase  that was a guy you could easily see playing at the next level  with his great 6-5, 270 frame, has length and power and no doubt a player that can get after it in the trenches.  Uses his leverage well and no doubt can be one of the most aggressive big men on the field at all times as well.  Also a 4.5 GPA in the classroom for this impressive big man prospect that gets it done on and off the football field.  Earned Honorable Mention All-County for Palm Beach.

@55_nightmrs
Big men were all over at the 6Star Football Showcase and one of the the top eye catchers was this class of 2023 big man from Flanagan, Martell Williams.  Some good footwork and movement in the trenches, like his top energy as a senior to be in 2022.Williams out of the Flanagan program is a very promising looking class of 2023 offensive lineman to know and watch our for in 2022.  A very physical player that uses  his hands very well and a big man that has a great motor and goes all out till the whistle blows, one of the top looking guys for having a great motor that goes nonstop in the trenches and looks to be a relentless worker from snap to snap to be the best player that he can be.