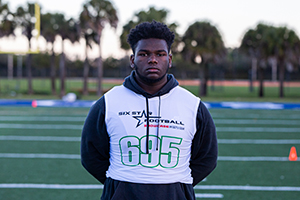 FLORIDA SHOWCASE COVERAGE | Talented DL/DEs  – We look at some of the  impressive DL/DE talents to know  who are showed out at the annual Six Star Football Florida Showcase on Jan. 29 at Somerset Canyons in Boynton Beach.

@sebastienblanc0
Blanc was impressive at the 6Star football Showcase, a speed end like Sebastien is hard to come by and at the event he showed his quickness and agility which made him a standout name to know. One of the most impactful defensive standouts at Somerset Canyon, Blanc is a very lean and fast play maker and it really showed this 2021 season as he finished third on the team with 43 tackles in his five games of action.  Had 29 assisted tackles 14 solo and was also second on  the team with four tackles for losses as a sophomore making a big name for himself. One of the standout players in the 2024 class on the DE spot that has both speed and movement that have impressed us in a big way.  For being a big time speed play maker, Blanc is hard to be on pure talent and athleticism. 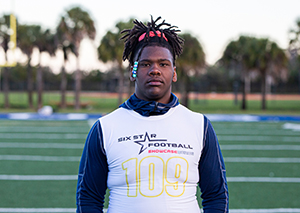 @campbelljawaun
Campbell was one of the more impressive size plus speed DL at the 6Star Football Showcase event and really holds a nice edge over most guys with his first step off the snap, a very good athlete and a great mover to make big time plays happen, Campbell is a talent that will be looking for a big junior season ahead and is one of the guys that really has a huge talent level to be one of the guys that rises to the top of the 2024 class. Named the small schools defensive player of the year, great offseason so far and benching 330 pounds with a 500 pound squat. 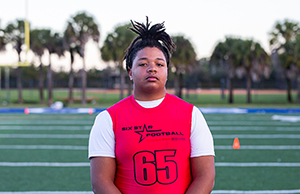 @DAndreL32
Players standout and when you see a guy like D’Andre in person you can tell that is has a lot of potential to be a game changer with the Palm Beach Lakes program, and at 262 pounds is a big man that can play both sides of the ball well no doubt. Big man that is an eye catcher in the class of 2024 for Palm Beach Lakes, 6-0, 262 in the trenches and a player that can play both offense and defense, on the offensive side of things LaVassaur lines up at Guard most of the time.  D’Andre is a baller and big man that can really pound the defense as a key big man that is very physical at Guard, no doubt one of those big men the Rams like to run behind knowing he can pave a big path for his runners and offensive unit. The Rams may enter him into the defensive mix more and more as needed for the 2022-23 seasons ahead and he no doubt has the size to be an impact maker there as well. 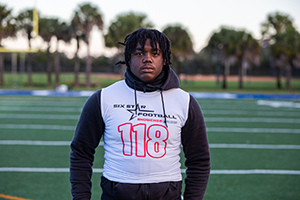 @JaydenMassey954
One of the high risers on the radar at the 6Star Football Showcase event, Massey is a very nice combo of speed and some physical play that is hard to find and is a player that was a key impact maker for a 9-3 Plantation program in 2021. Massey is one of the more impressive looking athletes coming up in the 2024 clas and a player that at 225 is one of the hardest hitting DL and combo MLBs out there, one of the ‘23s we can see really jumping onto major college radars with his play and frame also, both tough and aggressive play maker, makes lots of plays happen  with instincts and a great ability to read and react quickly. Massey had 40 tackles to help Plantation go 9-3 on the year and no doubt will be one of the senior leaders on defense come 2022, one of the area players we could see racking up a long list of offers.  Also added three pass deflections as a guy that can jump the passing lanes well also at DL/MLB. 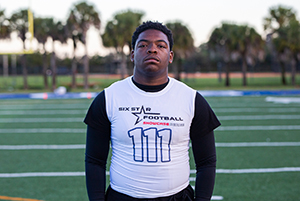 @DjPauling
Good looking big man coming up that has a nice upside and is one of those players that is very tough to block, powerful and a guy that is one of the most relentless tough guys out there.  Looked  like a impressive big man at the 6Star Football Showcase event. This 6-0, 225 Defensive End from Coral Glades is a player to keep on the high radar, Pauling can really make a QBs life hard, we like how Pauling comes off the edge with a physical presence, a guy that likes to run over and through blocks, a stout DE and a tough one, Pauling has one goal, make a huge play in the backfield and he finds himself doing just that time and time again, good player on contain also, can chase some guys down and make tough physical stops and throw QBs/RBs to the ground with some big time force also.  Plays hard and plays physical.

@david_pettway3
30.9 inch vertical was second best among DL/DEs at the 6Star Football Showcase and also had a very good looking mark in the broad jump of 8’11 for this 270 pound DL that impressed.  One of the guys that was among the most athletic big men at the 6Star Football Showcase, you can see that David will be one of the top tacklers as senior next year and had a fine junior year in 2021.  Good power and toughness, a great big man mover with his feet at the event also.  Pettway is a big man that can be impressive and also can move very well,  David reports times of 5.1 in the 40 yards dash, 4.93 shuttle and reports a 27.3 inch vertical also. No doubt a very fine big man athlete that is a mover as well as a major power and strength presence in the trenches who reports a bench press of a big time 345 pounds and squats a huge 600 pounds as one o the elite DT/NGs for power and pure athletic skills in Florida right now.  Was fourth on the Indians for tackles with 59 and added three tackles for losses in his nine games of action. 33 solo and 25 assisted tackles on the year for one of the hottest talents in the Florida 2023 DL class. 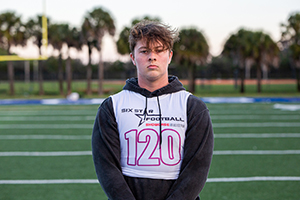 @bpv25_fb
Porter has the size and punch up front in the trenches to be a very good big man prospect and showed just that at the 6Star Football Showcase, a man of talent and size, 6-2, 245 and was one of the fiercest competitors at the Showcase, big things are ahead for Porter, a player that has a great football build and body and is one of the more impressive hard hitting and aggressive all over the field big men that you will see on a DL.  No doubt a big junior season looks to be right around the corner for this standout ‘24 play maker from Gulf Coast High School. 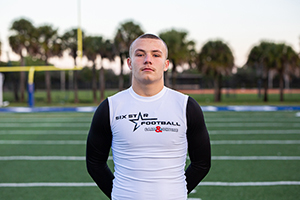 @AndrewZock1
Some guys standout in the crowd and one such performer that had a great motor and a high energy level at the 6Star Football Showcase was this impressive looking DE from North Marion, a beast at 6-2, 220 pounds. Was third on the team with 43 tackles and will be the leading returner for tackles come 2022, no doubt a young and impressive play maker. Zock was also second on the team in tackles for losses with five this year. A very impressive looking bigger 6-2, 220  length and power DE that was a pure force on the DL/DE edge of the line this year, Zock is a player that is lean and powerful at 220 pounds, this big time athlete has a huge future ahead of him for sure at North Marion and is a player on the DE that can really motor and chase down QBs and runners, excellent big man speed and ability to track the ball down and make some huge plays, no doubt one of the prime time DEs out there in the 2024 class, Zock is a big time athlete and great footwork and mobility athlete that is relentless on the edge.