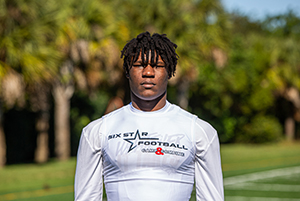 FLORIDA SHOWCASE COVERAGE | Talented WRs that shined in Boynton Beach (2023) – We look at some of the  impressive WR talents to know in the rising 2023 class who made some noise at the annual Six Star Football Florida Showcase on Jan. 29 at Somerset Canyons in Boynton Beach. 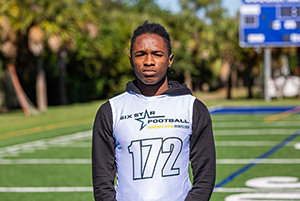 @rolandandrews16
Andrews no doubt really shined as one of the elite prospects at the Showcase, he had the best vertical among WRs at 34 inches and the best broad jump also for a WR at 9’10.  Roland also was third best 40 yard dash time among WRs at 4.64.  Bigger 6-0 WR that no doubt was  a standout performer at the 6Star Football Showcase, showcasing a terrific combine performance as he recorded the fifth fastest 40 time, posting a 4.64 laser time 40-yard dash and posted one of the top broad jump marks (9-10) and vertical jumps (34 inches). Andrews shows good looking hands and a player that really should be a hot prospect and riser to know in the 2022 season ahead. Andrews is a longer and impressive looking 6-0 inch target for Winter Haven and a very impressive play maker in the open field, Andrews could be a guy that could be a double digit touchdowns guy for the offensive attack at Winter Haven.  Great play maker that should use his eclectic speed in a big way again in 2022.

@etienne_stan
Etienne is a player that has good speed and should be one of the Miami play makers to take a look at from the 6Star Football Showcase, a good looking player that gets some nice separation from the defense.  This Vikings WR prospect from Miami Norland has some impressive speed and is a natural play maker in the open field that can be very impressive to watch. Etienne is a standout track and field athlete who competes in the 100, 400 and long jump. he shows good speed, can make guys miss in the open field and is a good route runner as well. Should be a name to know out of Miami among fast WRs and play makers that should be grabbing some next level offers soon. Etienne has drawn interest from Jackson State, Tiffin University and Anna Marie. 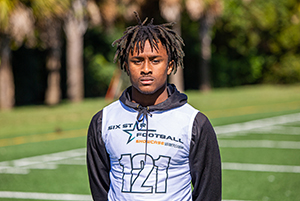 @Chris_foster21
Foster had a nice showing at the 6Star Football Showcase, he was third among WRs with a vertical of 34.4 inches and Foster tied for fourth in the broad jump among WRs with a mark of 9’3.  Christopher was also sixth among WRs in the 40 yard dash at 4.68  Good looking athlete that can make some plays with his speed, Foster was one of the highlight kind of athletes that was a gamer at the 6Star Football Showcase, a deep speed threat that has been seen making some very big time catches. He posted a 4.68 laser timed 40-yard dash along with a 9-3 broad jump and 34 inch vertical. An all-district selection, Foster is a hard worker in the weight room as he has added 10 pounds of muscle since the end of the 2021 season. A good looking athlete that has some of the top big play potential out there and is a very fast athlete that can make some grabs that really turn some heads.  Foster is a natural speed athlete and is in for a big senior season ahead. Also a standout student, Foster reports a 4.0 GPA. 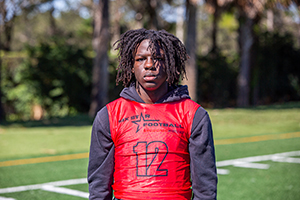 @lijahgotfanz_
Cochran was impressive and his broad jump of 9/1 was the fifth best among WRs at the Showcase. Monsignor Pace 2023 Jae-Lijah Cochran was a standout combine performer on Saturday, recording one of the event’s top 40 times as he posted a 4.66 laser timed 40-yard dash, along with a 9-1 broad jump and 32 inch vertical jump. One of the speedy WR targets and athletes at the 6Star Football Showcase, Cochran has a knack for going up and making big catches against DBs, and is a hot potential play maker to watch for. Cochran is one of those nice deep threat beat the defense to the spot kind of play makers, good open field speed also to pull away from DBs chasing, no doubt a player we think could have a very big senior season and be on the college radars with a big final season for Pace. 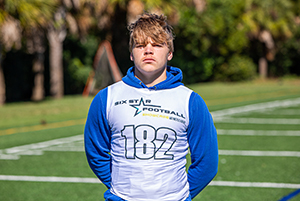 @AidanMahon3
Mahon is a player that can make some big plays and can play both TE and WR, Mahon is a player that can make some big plays happen, good looking player that showed a nice upside at the 6Star Football Showcase.  Mahon is one of those good hands play making WR/TEs to know, and had a very good junior season at Park Vista, Mahon had 14 catches for 205 yards and three touchdowns and was a versatile weapon both as a key blocker and hands TE/WR that has some good hands in the open field to watch out for.  A big senior season is ahead for this talented ‘23 play making WR/End prospect to know.   Is a deep ball threat that can go up in a crowd and make some hard catches and shows a lot of guts and impressive open field toughness. 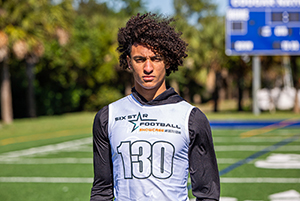 @prestochris23
Presto is a player that can make some big plays happen, 6-2, 190 and a player that gained nice experience this year, a good athlete that made a nice showing at the 6Star Football Showcase.  Presto is a 6-2, 190 target from Cardinal Newman, he had 386 yards receiving for the Crusaders and finished second on the team for receiving yards.  A strong all-around athlete, Presto recorded an 8-7 broad jump and 32 inch vertical. Presto had a pair of touchdowns in his 10 games and averaged 14.3 yards per catch and 38.6 yards per game receiving for Cardinal Newman.  No doubt we could see Presto being one of those guys that goes off for 800 yards receiving in a huge senior season this upcoming 2022 season. Also a standout athlete, Presto reports a 4.5 GPA. 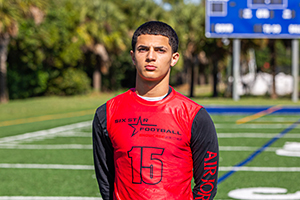 @Ruiz_jaiden
Ruiz is one of those players that has speed and skills and is a talent that can make some plays happen, good looking athlete and a player that impressed at the 6Star Football Showcase. A very impressive looking go to WR and play maker, excellent at slants and 10-15 yard routes, good crisp route runner with some open field speed and play making skills that are impressive,  no doubt this guy can make some huge catches and plays happen and is one of the top looking hands guys you will find in the 2023 WR class among Florida’s most impressive up and coming risers to know. 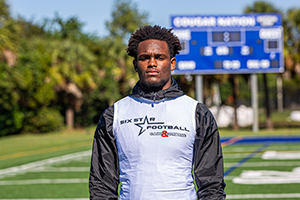 @SebastienSain10
The biggest WR prospect at the 6Star Football Showcase at 6-6 inches tall, Saint-Louis showed he was a big target and a very talented target also that can make some huge plays happen and was a guy that also can use his 210 pound frame to fend of smaller DBs and be a very tough matchup to handle. Boca Raton 2023 Saint Louis is the biggest WR prospect at the 6Star Football Showcase right now, 6-6 inches tall and 210, this guy is one huge target and a play maker that you can throw the ball up to and watch him make some big time catches in the air and great plays deep down the field.  One of those guys with a big offseason and senior year could attract some D1 looks with his impressive size in the open field. 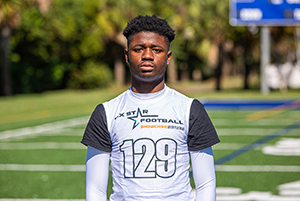 @LoganAndFriends
Scott recorded one of the top combine performances as the 2022 Florida Showcase, posting a 4.56 Zybek laser timed 40-yard dash.  An impressive looking junior play makers at the 6Star Football Showcase, will look to help the loaded Aquinas offensive unit with some extra outside speed at WR and has some wheels that really could pay rewards in a big way for the passing attack in 2022.  Scott had several highlight type catches during the 7 on 7 portion of drills on Saturday, hauling in several leaping catches, and showed some elusiveness and shake and bake in the open field. Scott is a prospect that could emerge onto the scene as a hot senior to know in the coming year, no doubt his athletic  skills  could be huge for a big senior season ahead. 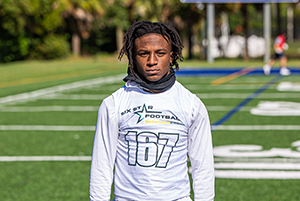 @slide1time
Venice 2023 Keyon Sears ripped off a 4.62 laser timed 40-yard dash along with a 9-3 broad and 34 inch vertical jump during the combine portion of Saturday’s Six Star Football Florida Showcase. The 40 time was among the top times at the event. Sears has proven on the field to be a player that can blow past the defensive backs for some huge down field catches, has that break a away speed that is huge and is one of the most exciting junior WRs to know in Florida as he is coming off a junior season that saw him haul in 15 passes for 302 yards and five TDs for the defending state champions. Good wheels, open field nightmare for defenses to tackle and handle in the open field, Sears is very fast and a very impressive looking play maker to know major notice of. 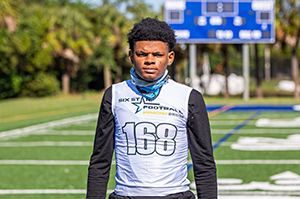 @playboi_rod04
A very impressive looking play maker at the 6Star Football Showcase, this 6-2, 165 target showed some of the top route running skills at the event, his hands are good also and at 6-2 inches tall this senior prospect has both size and hands that should warrant college prospects and teams to take some notice in the impressive Sears games and speed at the WR position.  A play maker to watch for and one to know for college programs looking for an impact maker. Sears posted a 9-6 broad and 33 inch vertical in the combine portion of Saturday’s event. 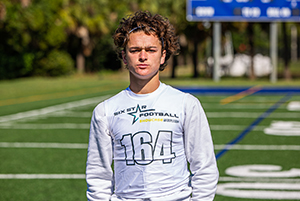 @tylersmith4_
A potential under-the-radar Division I prospect out of Sunlake, 2023 Tyler Smith is an impressive playmaker who has excelled as a kick returner and receiver. One of the more impressive athletic play makers with some good hands at the 6Star  Football Showcase, Smith is a hot one to know in the 2023 WR class. Smith was a great to go WR and play maker for the Seahawks offense this year and led the team in receiving yards with 390 yards in his nine games.  Smith scored four touchdowns and averaged  43.3 pre game and 17 yards per catch on the year with 23 receptions and no doubt was one of the top hands play making stars to watch out for in the league.  Good looking senior to be and a great returning offensive weapon for Sunlake. Smith, who is playing for Team Tamp 7v7 this spring, recently took a visit to Tennessee State and has drawn interest from several other programs.

@elijawalton
North Marion WR Elija Walton is among the most underrated prospects in Florida’s rising 2023 class. At 6’4, 205-pounds, Walton has an impressive frame with broad shoulders and potential to add good muscle mass with age and continued work in the weight room. Walton had a strong showing in the combine portion of Saturday’s event posting a 4.7 laser timed 40-yard dash along with a 9-4 broad and 34 inch vertical. Walton is a guy that is a lean and impressive speed play maker, really showed he has a nice build for being that hard to tackle speedster, showed some great footwork and a knack for looking the ball into his hands as a good pass catcher and should be a nice go to offensive weapon in the passing game for North Marion in 2022.  Walton is one of the more impressive showcase attendees for changing direction and being a guy in the open field that can freeze defenders in their tracks.