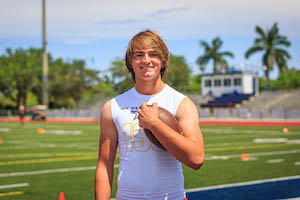 FORT LAUDERDALE, Fla. — The Six Star Football 2021 Florida Showcase featured several talented prospects from around the state as several players took their game to new heights and showed off their all-around skills in both the Six Star Football combine and showcase events. 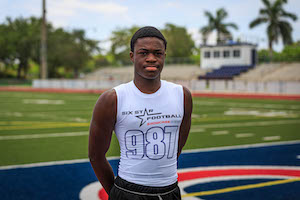 Claude
Bastien
LB | 5'11" | 175
Golden Gate | 2024, 5-11, 175, LB, 2024, Golden Gate @Claudeswrld
A player that was impressive at the 6Star Football FL Showcase, Claude had a 32.8 nich vertical mark and a 102 broad jump, a very impressive play maker in the heart of the Golden Gate defense and a super sophomore to be that we think is in for a monster year in 2021. Lean and athletic no doubt Bastien will be a key speed play maker and a watch out for backer in the hot Florida class of 2024, expect some great plays from this big time looking athlete in 2021. 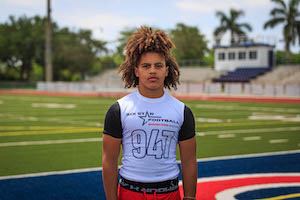 Bryson
Bowen
LB | 6'0" | 180
Bradford | 2023, 180, LB, 2023, Bradford @bbowen_5
Bowen, a player that had a 34.8 inch vertical and also racked up a 102 in the broad jump was no doubt one of the hottest Linebacker prospects at the 6Star Football FL Showcase and a major athlete that was super impressive. Bowen, a player that can be a major attacking middle backer against the run and loves to come up and make a tackle for a loss, good reader, smart and patient play maker that is tough and very physical, great play maker against the run. 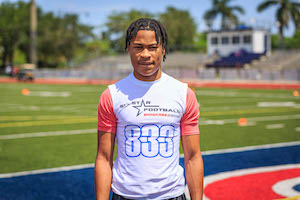 Bryce
Brown
DB | 5'10" | 140
Westminster | 2023, 5’10,140, DB, 2023, Westminster  @YdcBryce
Clocked a big time 4.64 in the 40 yard dash and a nice looking broad jump mark of 112, one of the best of the best at  the event. A very impressive looking athlete and DB that has great speed and abilities on the field, no doubt Brown is a play maker that can make some huge hits and blow WRs up and also is a quick play reader and reactor when the ball is in the air, no doubt an athletic player that can be a major impressive DB with speed and skills.  Could well have been the top defensive back prospect at the 6Star Football  FL Showcase, no doubt an electric player to watch. 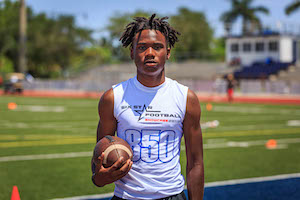 Brenden
Cook
WR | 5'11" | 150
Fleming Island | 2023, 5’11, 160, WR, 2023, Fleming Island  @Brendencook2023
Also a track and field standout, Cook stole the show in the combine portion of the Six Star Football Florida Showcase, turning in a 4.60 laser timed 40-yard dash, which was tied for the fastest mark at the event. He also recorded a 123 broad jump and a 36.7 vertical leap — bpth the top marks at the event. Although he is a bit slight of build at 160-pounds, it doesn’t show on the field. Cook has terrific agility and quickness and is able to gain separation from even the best defensive back. He has strong, consistent hands and has the ability to make tough catches and win 50-50 balls.  Also a strong student who reports a 3.4 GPA, Cook is still flying under the radar among college coaches but he has a bright future as a prospect. 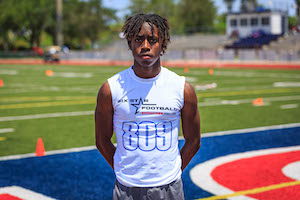 Shelton
Gilyard III
DB/S | 5'8" | 160
Seffner Christian | 2023, 5-8, 160, DB, 2023, Seffner Christian @GilyardShelton
No doubt one of the most impressive athletes at the 6Star Football FL Showcase, Gilyard recorded a big time mark of 32.7 in the vertical and had a 108 in the broad jump, both two of the more impressive performances at the event, no doubt a player that can make big time things happen and a super hot junior prospect to watch out for. Big time player getting many college looks and interest already, expect a monster junior year in 2021. 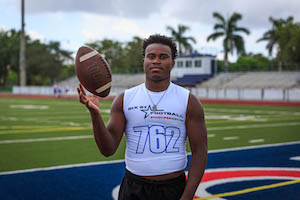 762 — Andre Phillips, Jr., 6-1, 205, LB, 2022,  Apopka @underdawgpete
No doubt Phillips out of the great Apopka program is a player that is a major talent and a major veteran in the middle of their defense that will be a major impact maker and a key run stopper this upcoming season, really showed out at the 6Star Football FL Showcase, Phillips had a 32.5 inch vertical and a 107 mark in the broad jump, a player and a big time athlete, one of the elite backer prospects we like alot in the senior to be class to keep on the high radar watch list. 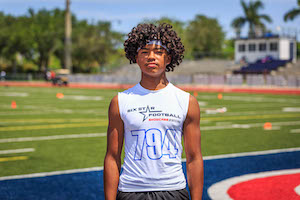 Dominique
Pringle
DB/S | 5'9" | 155
Colonial | 2022, 5’9,155, DB, 2022, Colonial @dominiquepring4
Wow, what an athlete with a 36.2 inch vertical, no doubt Pringle is a  guy that can flat out sky for the ball in the secondary unit.  Also had a 116 mark in the broad jump, no doubt proving he is big time legit and one of the most impressive looking DBs in the Florida 2022 class. Huge things are in store for Pringle in 2021. Pringle is no doubt one of those wow type men in the secondary unit, a natural play maker that loves the one on one matchups and proves time and time again he is the best athlete on the field. Had 47 tackles and has the closing speed to really be a major weapon, no doubt a big time tackler also and a guy that can run with anyone on the field.

Jake
Robinette
WR/TE | 6'6" | 230
Bradenton | 2022, 6-6, 230, TE, 2022, Bradenton @jakerobinette3
Bradenton product showed off a huge frame with big time potential for growth. He recorded a 28 inch vertical recorded at the 6Star Football FL Showcase and  is a player that has elite D1 size at 6-6 inches tall and 230-pounds, a huge target and TE that has good speed and can be tough to handle, moves very well and can be one of those huge problems for smaller guys to handle. Major prospect for the next level and one huge talent for colleges to hone in on. 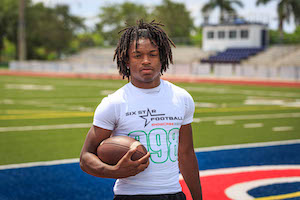 Jamarian
Speights
WR | 5'9" | 160
Crestview | 2022, 5-9, 160, WR, 2022, Crestview @JamarianSpeigh2
33.5 in the vertical as a major athlete and a high flyer among tops at the 6Star Football FL Showcase. 4.60 in the 40 yard dash and a big time 115 in the broad jump also. No doubt this guy has the makings of becoming one of the senior stars in Florida and we like his open field skills, watch out, could be seeing a load of next level offers soon. Aggressive, fast and athletic, Speights in the real deal. 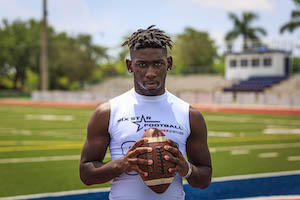 Cornell
Thomas
LB | 6'1" | 215
Manatee | 2022, 6-1, 215, LB, 2022, Manatee @cornellthomas33
Thomas is a big timer at backer and had both a big time broad jump mark of 112 and a 29.4 inch vertical, no doubt a player that will be a huge senior play maker and impact maker in the coming year at Manatee.  Thomas is a player that can play middle of outside backer, no doubt a player that has both major closing speed and plays very intense with a take you down hard kind of style as a tackling machine. Also a strong student, Thomas reports a 3.4 GPA and a 1050 SAT score. 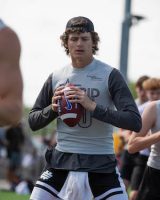 QBID Showcase: Class of 2023 QBs that are high stock risers

INVITEE SPOTLIGHT: Up close and personal with Colton Flint (2023)

INVITEE SPOTLIGHT: Up close and personal with AJ Battiste (2024)

INVITEE SPOTLIGHT: Up close and personal with Devon Jackson (2023)

INVITEE SPOTLIGHT: Up close and personal with Guy Edmond Jr (2024)