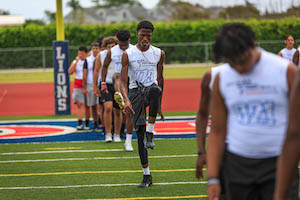 FORT LAUDERDALE, Fla. — The Six Star Football 2021 Florida Showcase featured several talented rising class of 2024-25 WR prospects from around the state as several players took their game to new heights and showed off their all-around skills in both the Six Star Football combine and showcase events. 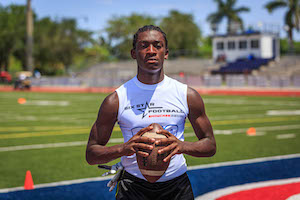 AJ
Battiste
WR | 6'0" | 170
Armwood | 2024, 6-0, 162, WR, 2024, Wiregrass Ranch @AJ_Batiste8
Battiste is a player that has some size and skills and should be a very good looking sophomore to be on the loaded Wiregrass Ranch team. Battiste is a target down the field that can make tough catches look easy and uses his frame to shield off defenders well. 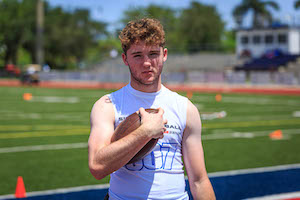 Ricky
Dobbyn
WR | 6'0" | 167
Trinity Christian Academy | 2024, 6-0, 150, WR, 2024, Deltona @Ricky_dobbyn
Good looking athlete that can make guys pay the price with his speed and open field movement, Dobbyn is a player that can also get up and make some tough catches in crowds. A hard worker with a  relentless motor, defenses have to account for him at all times. We were impressed with his strong hands and ability to make the tough catches. 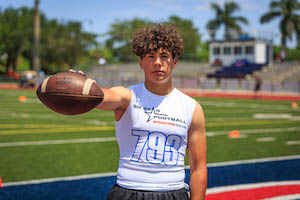 Christian
Estridge
WR/TE | 5'11" | 185
Deltona | 2024, 5-11, 185, WR, 2024, Deltona @cjestridge1
Estridge showed off a 28.1 inch vertical for the sophomore to be from Deltona, Estridge is a fine route runner and a very good athlete that can make big plays and make big time things happen for sure. We liked his abilities to make some sensational catches, we think he could be one of the top hands prospects in the FLA 2024 class, really a good set of soft hands in the open field. 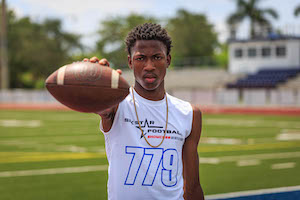 779 — Terrance Jones, Jr., 6-0, 137, WR, 2024, Hamilton @TerranceJonesJ2
Jones impressed with a 30.7 inch vertical and was a good one among WRs at the 6Star Football FL Showcase, Jones is a play maker that is 6’0 and can run well, lean and fast, Jones has some big time wheels and is a player that can really make the defense miss in the open field and can be a very elusive play making threat for sure. Great frame, going to be a big time play maker in the next three years. 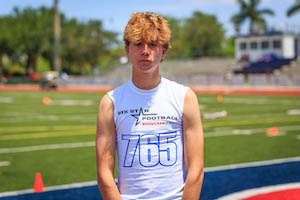 765 — Lars Korthais, 6-0, 145, WR, 2024, Westminster Academy @LarsKorthals15
A player with a very bright future, this 6-0 tall Westminster Academy wideout has a good build and is a player that plays hard and aggressive along with being a smart player and a very fine route runner as well, no doubt we like his skills to be a good one in the coming 2021 campaign. 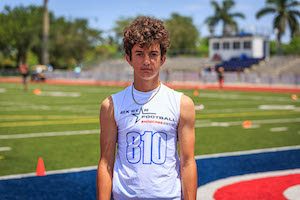 Jackson
Watrobsky
WR/TE | 5'9" |
Riverview | 2024, 5-9, WR, 2024, Riverview @jacksonwatrobs1
Watrobsky is a young and talented player to keep an eye on in 2021. At 5-9 he is a play maker that can really outwork the defense and is one of those players that is willing to work as hard as he has to for success, no doubt a name that should be known out there. Put together a 29.1 inch vertical as part of the combine portion of the Six Star Football Florida Showcase. 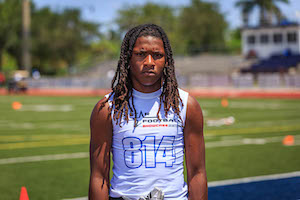 Chauncey
Williams
WR/TE | 5'10" | 165
John Carroll | 2024, 5-10, 165, WR, 2024, John Carroll @yaboiichauncey
4.78 in the 40 yard dash, no doubt a player with some nice speed early on in his career and a back that will be one of those key super sophomore names to know this upcoming season, watch out for Williams in 2021, he is a player that can use big time athletic skills and has a college ready athletic frame, love his skills to be a star in the near future. 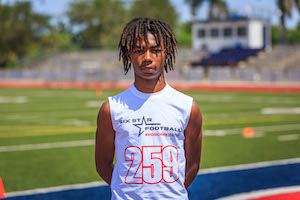 259 — Emmanuel Yisreal, 5-7, 125, WR, 2024, Mainland @showtime8
Taking a look at one of the WR that we felt was among the most impressive at the 6Star Football FL Showcase, this guys has the speed that poses huge problems for DBs to run with stride for stride and also works super hard with great footwork and hands as well. 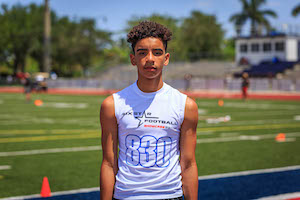 830 — Amari Jackson, 5-6, 130, WR, 2025, Timber Springs @certified_amari
29 inch vertical was one of the top verticals among WRs at the 6Star Football FL Showcase, no doubt a player with a huge future ahead, Jackson will be a major speed guy and a hard guy to handle in the open field, no doubt a flyer and a speedy play maker that can make the big plays happen at any time. 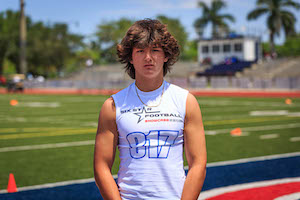 817 — Ryan Matulevich, 6-0, 180, WR, 2025, Cardinal Mooney @MatulevichB
27.4 inch vertical at the 6Star Football FL Showcase, no doubt one of the most impressive looking younger WRs at the Showcase, Matulevich is a 6-0 play maker who has some hops and with four years left could be one amazing player to watch out for no doubt. A major athlete, great frame, strong, fast and powerful. 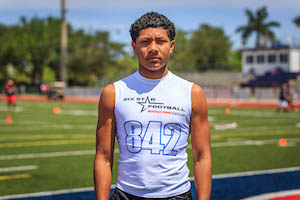 842 —  Greg Thomas, 6-1, 180, WR, 2025, American Heritage Delray @Zaethomas11
Thomas was one of the three impressive looking class of 2025 WRs that really showed out at the 6Star Football FL Showcase, already 6-1 inches tall, Thomas is posing major problems in the open field and is a player that is very hard to defend against, always capable of a huge play with good speed. Big time down the field deep threat for sure.