Offensive impact makers in the Florida Panhandle class of '23 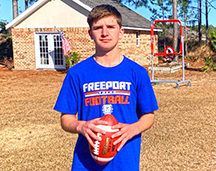 Hot class of ’23s offensive impact makers in the Florida Panhandle Area – We look at some of the top class of  2023 play making offensive players, guys that are major impact makers and can flat out make big things happen on the football field.  Blake Garland is a QB from Choctawhatchee that is a good one and is one of those  natural athletes that makes his team better.  Another outstanding QB prospect is Markell Redding from West Florida, a QB that as a freshman racked up an impressive 1,236 yards passing.

Raymond Cottrell, 6-3, 205, WR, 2023, Milton @RaymondCottre13
One of those big men that can run like the wind and is 6-3 inches tall and is very fast in the open field, both a great runner and a huge return threat that can take on back with every touch of the football.  Can make huge runs and has power also to push defenders to the ground and keep going down the field.  Also a huge target and very nice hands, big time athlete who can flat out make it happen.  Holds offers from Georgia and Florida State already with a boat load more coming his  way very soon no doubt. 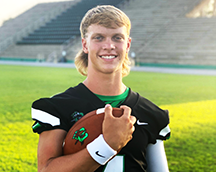 Blake Garland, 5’10, 150, QB, 2023, Choctawhatchee @BlakeGarland10
Watch out for the big timer in the 2023 class from Choctawhatchee High school and an impressive well rounded dual sport athlete that also is a fine baseball player in the outfield and middle infield.   Plays QB and safety in football and also is a top notch student who holds a very impressive 4.38 weighted grade point average. Garland has a top arm among the standouts in the Panhandle area of Florida’s top ’23 slingers and is a player that looks to have a very bright future for Choctaw.

Kobe Johnson 5’11, 210 RB 2023 Pine Forest @Johnson1Kobe
One of the more impressive looking class of 2023 running backs in the Panhandle, Kobe Johnson is a major talent and a play maker that can make some big time runs out of the Pine Forest backfield. the 5-11 back and super sophomore sensation is a runner that can make tacklers miss and has a very nice combination of power and speed out of the Pine Forest backfield.  No doubt a very  impressive athlete that looks to be a good one and a guy to keep on the high talent radar list for ’23 Florida backs.

Ashton Nunes, 6’1, 155, QB, 2023, South Walton @QBAshton2
One of the most talented QBs in the Panhandle area is no doubt the impressive Ashton Nunes, a big timer from South Walton High School. Nunes is a QB at 6-1,  155 that can make the most out of each play and is a very smart younger player to watch out for. Excels in the spread offensive and is a QB that is good at being able to see the whole field better than under center, but could play both. Also can play safety and runs a 4.9 in the 40 yard dash. 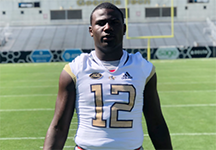 Randy Pittman, 6’1, 225, TE, 2023, Mosley @RandyPittman04
One of the top play makers in the 2023 class and a huge prospect in the Panhandle region, Randy Pittman is a big timer that can make some huge plays at TE and is 6-1, 225.  A nice big downfield  target with some good hands and power at Mosley, Pittman has a major upside as a player to take  notice of.  Among his huge offers are Tennessee, Florida State, South Carolina, Florida, Maryland, Florida Atlantic, and with his huge skills he no doubt with have monster list in two years to choose frame.  Big time athlete that is getting some major attention to take notice of. 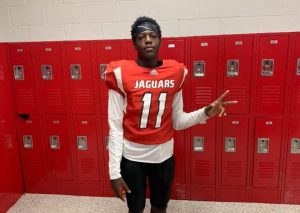 Markell Redding 5’11, 170 QB 2023 West Florida @Kell_zo3
One of the very hot Quarterback prospects in the  Florida class of ’23 is Markell Redding out of West Florida High School.  Redding is one  of those big time impressive athletes that does it all very well, you have to like his abilities to be a extremely  effective pocket passer with a strong arm and good poise.  Redding also is one of those very young but very smart High IQ leaders under center and has proven he is more than able to read coverages and make the big plays.  As a freshman he racked up 1,236 yards passing and had 17 TDs and in 2020 racked up 912 yards and had eight touchdowns in just six games.

Will Smiley, 5’11, 150, QB, 2023, Bay @willsmiley04
Smiley is a big time field general who sees the field in front of him very well and is a young leader in command of the Bay offense that has been very impressive so far in his early career. Smiley has one of the smoothest balls in the state, a guy that can make if fly and make it look easy with excellent ball placement on his passes.  No doubt loves to throw out of the shotgun and is a QB that has made a nice early impact in his career as well.  Smiley looks to have a nice future ahead of him and has proven his arm strength early on.

Daquayvious Sorey, 6’1, 180, AT/WR/DB, 2023, Graceville @daquayvious
One of the hottest super sophomore sensations in the Sunshine State is Panhandle area big timer Daquayvious Sorey of Graceville. The 6-1, 180 athlete and wide receiver is one big time athlete who already has landed impressive big time offers from South Carolina, Maryland, Arizona State, Mississippi State, Texas A&M, Florida State, Kentucky, Florida, Southern Miss, Arkansas, Auburn, Alabama and Georgia thus far.  The athletic play maker should be one of the elite play makers that should be a huge fan favorite in the coming years and a player that is one huge talent.

Micah Turner, 5-8, 175, ATH, 2023, Niceville @BayBayTurn3r
No doubt a very impressive all-around athletic quick running back and WR that can play anywhere that speed and open field skills are needed for the Niceville High School team. Turner has  some big time skills and is always a play maker that has the potential  to  make the big play, lined up a lot at QB this year also, a guy that has the footwork and running speed to be a big gainer on every play but also has good QB instincts and a solid arm  as well.  No doubt one of the most exciting play makers in the Florida ’23 class.  Big time skills and footwork.

Kayleb Wagner, 6’0, 188, RB, 2023, Baker @kaylebwagner
Wagner has been impressive as an  athlete and has a load of potential at Running Back for the Baker program.  Kayleb is one of those players that racked up a big time impressive number of  yards with 1,403 yards and had a 10.8 average and scored 17 touchdowns on the 2020 season.  A very impressive offensive weapon that we like a lot and can make some very impressive things happen, one of the very hot class of ’23 prospects to keep an eye on for sure.