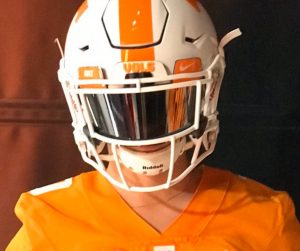 Hot list of Fab Florida Freshman in the class of ’24 – We look at some of the most impressive class of 2024 players in the Sunshine State, players like corner Guy Edmond, Jr. of The Benjamin School, a 5-10 speedster that has been a impressive play maker and is a must see in the Florida ’24 class.  Zailin Jackson is a LB in the Everglades from Clewiston that is very impressive and a good play reader to know.  Powerful lineman that are all size and physical players that have impressed include Jaydon Libema (Lake Highland Prep), and Chase Malamala (The Benjamin School) are both big timers  and must see trench warriors.

Bobby Engstler, 6-0, 200, K/P, 2024, Chiles @BobbyEngstler
One of the big time Kicker/Punters in the class of 2024 from Florida, Engstler was named a Adidas FBU Freshman All American and also is a big time student that holds a GPA of 3.5 at Lawton Chiles High School.  Engstler is a huge leg prospect that is ranked a four star punter/kicker and ranked the top punter in the nation by Kohl’s and also is the top ranked Pro style kicker combo leg by Kohl’s kicking. No doubt his monster leg makes him one of the elite legs in the nation and  is one big time impact leg to know in the Sunshine State. 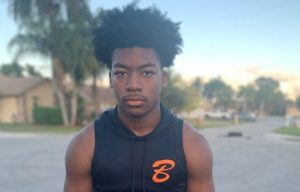 Guy Edmond, Jr., 5-10, 160, CB, 2024, The Benjamin School @GuyEdmondJr1
The Benjamin School’s corner and big timer up and coming future star Guy Edmond, Jr. is one of those talented play makers that has big time skills, also a WR that can use his  speed to make big impacts all over the field, Edmond, Jr. is one of the elite play making athletes in the Florida ’24 and one big time potential type player that is a must know.  In Edmond’s six games played, he had 17 targets, with four completions against, had one interception, one touchdown against. Added six pass breakups , 14 total tackles, nine solo, five assist.

Jake Guarnera, 6-3, 255, OT/DT, 2024, Ponte Vedra @GuarneraJake
The FBU Adidas All-American is a very impressive 6-3, 255 and is one of the OL that has been very impressive in the  Fab Freshman Florida class of 2024.  Guarnera is a big man that has a very athletic frame, long looking 6-3 build that really uses every inch of his 6-3 frame for some big time leverage advantage, a hard worker that is always working to get better and better, a player with excellent footwork and one of those players we like a lot to be a big time prospect in the up and coming 2024 class.  Keep an eye on this major talent that is a big timer coming up for Ponte Vedra.

Zach Haygood, 6-2, 188, WR/CB, 2024, The Bolles School @ZachHaygood2
The always powerful Bolles School always reloads every year with some major  talent and one of the up and coming big time talents is WR and 6-2 inch play maker Zach Haygood, a player that can make some big things happen and make some big time plays happen. Is a very  hard runner on his routes and also has some of the best hands in the 2024 class, Haygood should be one of those big time names to know and is a player we think will be a must see big timer for the Bolles School in the next three seasons. 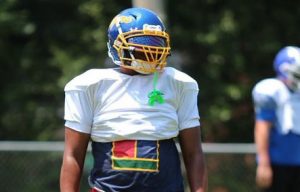 Zailin Jackson, 5-7,  213, LB, 2024,Clewiston @JacksonZailin
One of the Everglades players we think  should be on the radar from a school that’s had a long list of college players, the 5-7, 213 Jackson from Clewiston spells a good one early on in his career and Jackson should be name for the hot list on Florida’s ’24 class. Jackson shows a very good motor and is a good side line to side line play maker that has that extra gear to make some nice key tackles.  A guy we think that will  show to be a good play reader and player in the middle that has the speed and the play reading skills to be one of the key ’23s for Clewiston in ’21.

Jaydon Libema, 6-2, 262, 2024, Lake Highland Prep @JaydonLibema
No doubt a physical looking  big man that should excite recruiters is the 6-2, 262 Lake Highland Prep big man and trench warrior Jaydon Libema, a big timer for physical skills and one of the most impressive OL for pure athletic ability in the state. Libema is a big man that can dominate using all out physical and tough style of play, uses hands very well and gets the upper edge in a hurry with his power and strength, no doubt one of the elite ’24 big men in the state and a player that loves to play smash mouth football.  One of the very special talents in the Sunshine State class of ’24 and one major talented player. 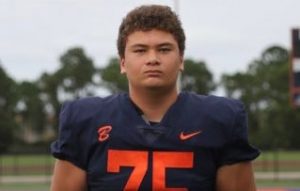 Chase Malamala, 6-6, 275, OL/DL, 2024, The Benjamin School @ChaseMalamala
Wow, at 6-6, 275 pounds the big man from the Benjamin School is a gamer and a pure bulldozer that can level guys, and who else among Freshman stands 6-6, 275 pounds in the Florida ’24, not many at all.  The big man, Malamala is a player that dominate and  has the elite size to be one of the best of the best.  No doubt colleges should take notice and we like his total package size and movement, physical play and hands. Also an excellent student in the classroom with a 3.80 grade point average and was named a FBU Adidas All-American.

Tovani Mizell, 6-1, 193, RB/ATH, 2024, Stranahan @TovaniMizell
No doubt one of the elite athletes and running backs in the Florida class of 2024, Stranahan’s Tovani Mizell is a big time athletes that’s going to explode over the next three seasons for the powerful Stranahan offensive unit.   4.55 speed out of the backfield make him one of the fastest running backs in the Florida freshman class.  Mizell isn’t just another football player, he is also one of the most impressive elite athletes in the Florida 2024 class  with a 34 inch vertical already as well as a 4.25 pro agility and a 9’11 mark in the broad jump.  Named a ADIDAS FRESHMEN ALL-AMERICAN as well.

Adrian Posse, 6-4, 185, QB, 2024, Monsignor Pace @posse_adrian
Looking for the next big time  QB prospect, 6-4 height and big time frame already as a freshman, no doubt a name grabber in the fab freshman 2024 class is the very talented arm of Adrian Posse from Monsignor Pace. Many consider him the top ’24 player in the nation, and they should, this guy is well beyond his years and one of the most amazing prospects at QB we have seen in a long time.  Posse already lands  offers among his tops from LSU, Texas A&M and Southern  Miss.  The experienced varsity play maker is on the verge of some huge seasons ahead and a big time Mr. Excitement guy.

Dylan Stephenson, 6-4, 225, DE, 2024, Miami Killian @Dstephenson24
One of the big time huge talents in the  Fab Florida class of 2024 is Miami Killian’s huge talented and Dylan Stephenson, a 6-4, 225 QB terrorizer to know and a player that has  a major upside to take notice of.  Stephenson is one of those elite size guys at 6-4 and is a play maker that can contain the edge with the best of them, a player that has very quick feet, busy feet, good movement, lateral talent all day long, Stephenson at a lean but very mean 225 pounds is on a Miami mission to he the top ’24 DE in the state and his build and talent no doubt make him one huge talent.   Great build and great footwork, speed and tenacity make Stephenson the real deal, also a FBU Freshman All-American.