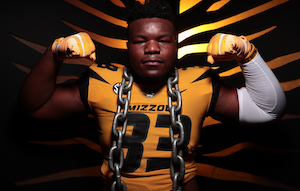 With the 2021 regular season nearing its end point, Six Star Football takes a look at several of the St. Louis area’s top defensive line prospects in the 2022 class who are rmaking noise this fall 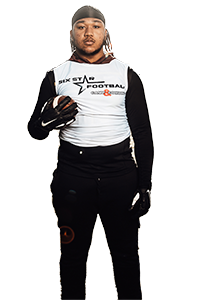 A strong and powerful defensive tackle who brings a good combination of upper and lower body strength to the field. Banks is listed at 6’4, 270-pounds and he has strong hands and the ability to break away from blockers and stop the run. A player who continues to develop and add new elements to his game and is improving his footwork and technique and all around strength and conditioning. Banks can get past blockers and find his way to the backfield and is an excellent run stopper and gap filler and has continued to showcase strong playmaking regardless of the matchup. Through eight games this season Banks has recorded 25 total tackles with four sacks and an impressive 10 tackles for loss. Banks has committed to SIU. 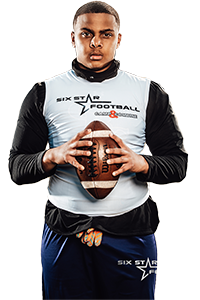 @thereallcbell
A strong, aggressive defensive lineman who has returned from an injury and is looking sharp and eager to make an impact. Bell is a physical defensive lineman who can power his way through contact and blockers and can also create separation and then pull down the quarterback. A physical interior pass rusher who can wrap up opponents on his own but is also great at finishing plays and forcing stops before they even cross the line. A player who has good thickness and some underrated speed and a strong work ethic on and off the field. Bell currently holds offers from Culver Stockton College and William Jewell and has received interest from SEMO and Akron to name a few. He also reports a 3.8 GPA.

@GrantFinley8
Finley is a two-way prospect with a strong frame, good balance and straight-line speed. He’s a first team all-conference, first team all district and second team all state athlete who can blow past blockers and get to the backfield and make some impressive tackles for a loss. He has a seasoned game overall and shows great toughness and great production both on the field and in the weight room. A player that is constantly pushing himself and one who has shown strong improvement from year to year. He currently holds offers from Missouri Western, SIU, Valpo, Lindenwood and Culver Stockton and has received interest from other programs as well. Through eight games he has recorded 40 tackles with 34 solo, 11 tackles for loss, eight sacks and two fumble recoveries.

An explosive defensive lineman who can find his way around blockers and get to the ball carrier with force and precision. He’s listed at 6’6, 240-pounds and he has the speed and mobility and upside to make things happen at the next level. He is a versatile prospect who has a great work ethic and shows terrific leadership as well. Ford hits hard and he has great hands and shows very quick feet and good overall speed. Ford has also seen time on the o-line and can really produce wherever he is asked to play given his strength, size and all-around athleticism. Through seven games this season Ford has recorded 41 tackles, 30 solo, one sack and an impressive 10 tackles for loss. Ford has committed to Notre Dame.

A physical, imposing playmaker who can power his way through the line and get to the backfield and make statement tackles. Gracial is an elite prospect who has a thick, solid frame and the kind of seasoned strength rarely found in a high school athlete. He has great upper body power and can force his way through double-teams and get to the ball-carrier and he is constantly overwhelming lineman straight up the middle. He has good footwork and timing and is extremely quick and mobile for his position. He is also an intelligent player and shows creativity with his pass rush and good anticipation and a strong motor as well. Gracial has committed to Mizzou.

@TommyHagan9 4
An underrated prospect who shows good speed, physicality and a strong drive to improve. Hagan is an intelligent, multiple sport standout who is constantly attacking and looking for a way to make an impact. He is quick and shows good leverage and can get around opponents on the edge using his speed, but also has very underrated strength and can even power through contact and break away from blockers. A player still flying under the radar who is going to make a statement one way or another. After eight games this season he has recorded 90 total tackles with 63 solo, an impressive 28 tackles for loss, 11 sacks, two fumble recoveries and one interception. He also reports a 4.2 GPA

An all-state defensive standout who shows a nice combination of power and quickness after the snap. Rustemeyer is a tough player overall who can break free of double teams and still get to the backfield and make a play. He is always pressuring the quarterback and shows good technique and strong improvement overall from a season ago and he has the speed to catch up to ball carriers from behind. A seasoned, intelligent player who knows how to use technique but also has the physical attributes looked for as an interior pass rusher. Through eight games he has recorded 42 tackles with 33 solo, five tackles for loss and three sacks. Rustemeyer has committed to Arkansas State.

Another strong, scrappy defensive lineman from Lutheran who has good hands and terrific work ethic. Wannstedt is a tough player who is very difficult to hold back. He pushes himself in the weight room and has strong arms and a lot of leverage and power as well. A 6’2, 290-pound defensive threat who can outwork opponents and pull down ball carriers when it looks as if he has his hands full with a blocker. A productive prospect who hits hard and is great at wrapping up athletes and getting to the backfield and stopping the run. Through seven games he has recorded 41 tackles with 32 solo and eight tackles for loss. He has committed to play at Murray State