INSIDER: Big man spotlight, lineman of Nebraska impressive talent – We look at some of the best looking offensive lineman in Nebraska and guys that are ally getting better and better each and every week.  2025 Freshman from Burke Bell, is one of those physical machines at an early age that has impressed in a... Read more » 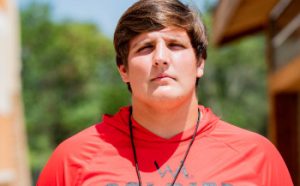 INSIDER: Big man spotlight, lineman of Nebraska impressive talent – We look at some of the best looking offensive lineman in Nebraska and guys that are ally getting better and better each and every week.  2025 Freshman from Burke Bell, is one of those physical machines at an early age that has impressed in a big time way.   Fedde, another young one, ’24 class, is a Columbus two way star and a hot DT/DR for his team, no doubt a man on a mission in 2021 for both men.

Cameron Bell, 6-0, 280, OL/DL, 2025, Omaha Burke @cambellx_
No doubt about it Cameron bell is one of the big men and a fab freshman prospect that is really make a huge name and wasting no time doing it as this freshman has earned some varsity starts and is one of the hot prospects among the top tier ’25s out there.  Bell is a huge 280 pounds already also and 6-0 for his height.   Switched over from playing more at Center to the Right Guard spot in 2021 and has really excelled and been one of the team’s most dominant blockers.

Carter Fedde, 6-0, 225, DL/OL, 2024, Columbus @CarterFedde
Fedde, just one of the super sophmores we love in the 2024 class, is a two way impact maker and plays center on the offensive side of the football, with his talent and time, he may so far be more of a college prospect on the defensive side of the football where he has been a major tackling machine, but no doubt in the 2024 class, Fedde is one of the top young centers in  the state for sure.  Helped Columbus off to a 4-1 start this 2021 season also, huge things are in store for Fedde.

Gage
Griffith
OL | 6'3" | 285
Aurora | 2022, 6-2, 275, OL, 2022, Aurora @GriffyMini
This mountain of a man and major college prospect has big time schools like Augustana, Sioux Falls, and  Wayne State among the early ones that have a lot of interest in his game for the next level.  This strong tackle and defensive tackle for the Aurora Huskies is a 3 year starter with 2 starts also his freshman year in 2018.  His style of play is hat on hat run fit blocking with a nasty attitude. Best skills are run blocking and finding work also physicality. Major power lineman also that can bench 285, squat 500, and dead lifts 520, he also cleans 315. 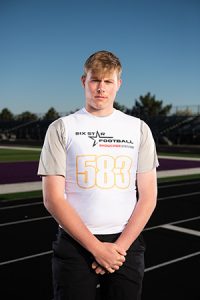 Cody
Harris
OL | 6'5" | 240
Bennington | 2022, 6-5, 240, C/LS, 2022, Bennington @Cody_Harris61
A player that was just spectacular at the 6Star Football  Showcase in Omaha,  Harris is a big and powerful blocker at 6-5, 240 and can really take over a game with that bigger and powerful build, a hot center that is a snap and blow you up and out of the player powerful player that can be one of the most explosive off the snap centers in Nebraska, no doubt a loaded with talent guy, also a hot long snapping prospect to know that excels at that aspect of his game also.  Wayne State and Dakota Wesleyan are recent offers for this huge talent, along with schools looking like NW Missouri State among those looking hard at his big time talents.  Expect one huge final year as the big man will look to gain more and more offers soon.

Henry
Rickels
OL | 6'4 | 270
Bellevue West | 2022, OL, 2022, Bellevue West @HenryRickels
This Air Force Commit is one of those huge talents to know in the trenches, no doubt a player with a major power game and one of the elite blockers in Nebraska football right now.  Rickels is a player that also held offers from Dartmouth, Kent State, and Austin Peay among the many, and lots of other schools really showed a lot of major interest in  this big mans style of play. 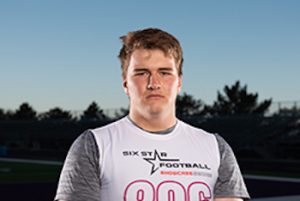 Austin
Sohl
OL | 6'3" | 285
Plattsmouth | 2022, 6-3, 288, OL, 2022, Plattsmouth @austisohl
No doubt one of the top tier senior edge blockers we like a lot that has power and does a great job holding his position on the field to make some big time looking blocks, Sohl is very powerful at 6-3, 288, has some extra leverage also and can overpower smaller guys and dominant at the point of attack.  Sohl is one of those players that overpowers the defender and drives his man right into the ground with authority.  Midland offered and has looks from Wayne State, Missouri Western, Augustana, NW Missouri  State, and Central Missouri just to name a few.

Josh Tollefsen, 6-3, 280, OL, 2024, Lincoln SW @JoshTollefsen
A super sophomore that has a great next level frame at 6-3, 280, Tollefsen could emerge as on one of those super stars and has the size to make some huge things happen.  No doubt a player that we look to get better and better with more experience to to be a high radar maker in the near future for the program at Lincoln Southwest High School.

Kelvin Washington, 6-2, 295, OL, 2025, Benson @Kelz_wash78
This young but well sized OL from Omaha Benson is a player to keep an eye on for sure with a bigger frame at 6-2, 295 pounds Washington will look to be one of those big men that can take over in the trenches and be a young player but also one of the major young talents for the Benson program.  Very impressive blocker and a player that we think will have a huge upside in the 2025 class.

Taylor Wieczorek, 6-3, 290, OL, 2022, Lincoln @Taylorwieczore2
Big man up front for the Lincoln offensive line, Wieczorek, a 6-3, 290 big and powerful blocker, is emerging as one of the hottest senior big men talents in Nebraska, has the size and is looking for a huge finish to this year also. Taylor holds two big offers also from Nebraska Wesleyan, and Dakota Wesleyan. No doubt is tough and physical play in the trenches has proved huge in his recruitment process.

Hanan
Young
OL | 6'3" | 260
Lincoln NE | 2023, 6-2, 265, OL, 2023, Lincoln NE @HananYoung1
Good looking impressive junior offensive lineman with some major power and a big man that is jumping onto some next level college radars also, Young is a 6-2, 265 trench warrior for Lincoln Northeast HS and one of those big time stock risers we think will be in for a huge year ahead no doubt.  Big time physical player, gets better every week, hard worker, big time talent coming up to check out.

★INSIDER: Young and talented, Spotlight on up and coming DB Prospects

★INSIDER: Top Junior Names to know at QB in Nebraska

★INSIDER: A look at players that impress among top lineman

★INSIDER: Relentless players who make big impacts for their teams

★INSIDER: Junior Gems to have on the high radar for OL ’23