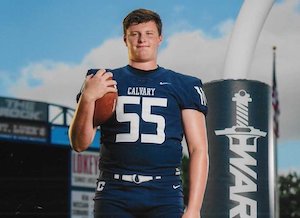 These rising OL prospects are among many in the 2022 class to watch this spring and summer as they gear up for their senior season. Already several prospects have caught the eye of college programs, either picking up Division I offers or have drawn significant interest.

Miguel
Cedeno
OL | 6'6'" | 295
American Heritage | 2022, 6’7, 305, OL 2022, American Heritage @IamMiguelCedeno
An imposing offensive lineman who continues to increase in size and skill as he ages, Cedeno has a great frame and is athletic and shows speed and terrific footwork as an offensive tackle. He can control his side of the line and has the build and the athleticism needed to stay with any edge rusher, both physical and aggressive playmakers as well as speedy players who look to fake to the outside and slip inside. A conditioned player who can push opponents completely out of position. He currently holds offers from Southern Miss, Utah and West Virginia and he has also attracted a lot of attention from a variety of other large programs as well.

Jackson
Crozier
OT | 6'4" | 270
Cardinal Gibbons | 2022, 6’4, 275, OT, 2022, Cardinal Gibbons @JacksonCrozier1
Crozier is a smart player who has started receiving interest for his play as a LT. He is a good sized prospect who has thickness and good balance to his frame but still isn’t maxed out physically. He shows quick feet off the snap and can get low and determine where defenders go. He is good at wrapping them up but he also looks to keep his hands free and stays ready to grab and pull and direct traffic. A solid prospect and a hard-working player in the offseason who continues to work on his strength and technique. He is also a smart student in the classrooms and reports a 3.8 GPA.

Preston Cushman, 6’5, 285, OL, Calvary Christian @Cush_51
An athletic prospect player who looks to stand up quickly and keep his opponents back and away from the ball. He has long arms as he reports a 6’9 wing span and is capable of handling a variety of edge rushers and shows the balance and center of gravity needed to stay in front. He can make plays down the field but is at his best while protecting the quarterback on passing plays. Cushman does his job and he can battle in the trenches and set a tone. He is an improving prospect and one who understands how to use his frame for leverage and has good upper body strength as well. Also a strong student he reports a 3.7 GPA. Cushman holds offers from Eastern Kentucky and Harvard and has drawn interst from several others as well.

David Espino,  6’1, 295, OL, 2022, TPA @David_Espino_
Espino is an underrated lineman who has an upside and a great work ethic. He’s currently flying under the radar but has the type of game in the trenches that does a lot of talking for itself. He can move around well and is very versatile on the line, seeing action as a sinner and a guard and even a tackle. He expects a lot out of himself and he pushes himself to improve and get quicker off the line and make harder hits and he continues to improve as both an athlete, physically and in his decision making when plays breakdown. He also reports a 1070 SAT score.

Aaron
Hicks
OG | 6'3" | 285
Deerfield Beach | 2022, 6’3, 285, OG, 2022, Deerfield Beach @Aarondagoat56
Hicks is an impressive athlete who has a strong combination of size and build and all around physicality. He’s a tough player who is very productive on the field and he has a high IQ for the position and he has a seasoned all-around game as well. Hicks can make things happen immediately off the line and can overwhelm defenders and keep them out of position and throw them to the ground. A player on the rise in the recruiting world currently holds offers from several programs including University of Pittsburgh and North Carolina and he has also received a variety of interest from several other programs as well. 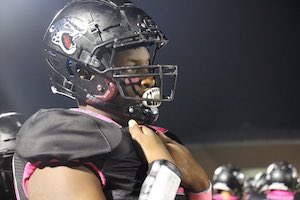 Zachary Perry, 6’5, 300, DL/OL, 2022, Pembroke Pines Charter  @PriinceZach
Perry is an underrated player in the area who shows the ability to make plays as both a defensive tackle and an offensive tackle. He has great size and build at 6’5, 300-pounds and he holds his weight and can make plays off the line and stay with seasoned opponents coming off the edge. He can force his way to the backfield on his own but is good at keeping edge rushers back and out of the pocket. A player who is good at using leverage and staying strong on the right corner and has some upside at the position given his frame and ability.

Shomani Seymour, 6’5, 265, OT, 2022, Plantation @ShomariSeymour
Seymour is a talented offensive prospect who shows a lot of upside at his position. He has great size and a natural feel and the skill set and frame that will continue to develop as the ages. He’s a strong player who is physical and understands his position and can grab a hold of an opponent and have his way. He is a great pass protector but is also terrific at making holes and taking down edge rushers quickly after the snap. Although he currently holds offers from Pittsburgh and Indiana, he still has an underrated quality to him as a prospect.