Six Star Football takes a look at several 2022 OL prospects in Broward' who have raised their profile. 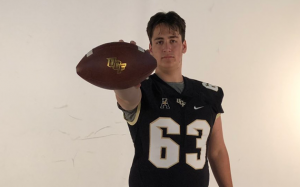 These rising line prospects are among many in the 2022 class to watch this spring and summer as they gear up for their senior season. Already several prospects have caught the eye of college programs, either picking up Division I offers or have drawn significant interest.

Here, Six Star Football takes a look at several rising prospects in the 2023 class out of the Broward area.

Rodley Cadet, 6’1, 285, OL, 2022, Coconut Creek @RodleyCadet1
Cadet is a solid player who has good hands and is quick off the line. He can see time in a variety of positions both on offense and on defense. He looks good at tackle and can stay with strong edge rushers but is also a confident center, able to put the ball into play and then handle his own against strong interior rushers. Cadet can also see time as a defensive tackle and he has good thickness and holds his weight well and he has a lot of force.

Noah Fernandez, 6’4, 275, OL/DL, 2022, Coral Springs Charter.
A confident two-way who can make plays on both sides of the ball. He has good size and power and he holds his weight well and shows the ability to grab a hold of an opponent and force them backwards. He can see time as a guard and a tackle and he gets off the line and looks to make contact and disrupt pass rushers. On defense he can hold his own and looks to power his way through contact and can then push off and then attack ball carriers from the side. A hard-nosed prospect continues to develop.

Jacorie Foster, 6’2, 260, DT/OL, 2022, Dillard @_golive_
Foster is a good prospect who shows the ability to make plays as an offensive and defensive tackle. He has good footwork and is always looking for ways to improve his speed and conditioning and overall strength in the offseason. He’s a physical player who can make contact and throw opponents to the ground or even drive them to the ground himself. He pushes in space and has the ability to get off the line and make several blocks for the run game. A guy who can handle himself well in one-on-one situations and he loves competition.

Bryce Katari, 6’2, 295, OL, 2022, North Broward Prep @brycekatari1
A multiple position lineman who shows a solid upside as a center. He can also see time at tackle and he plays hard and physical. He’s very mobile and quick and he holds his weight and plays loose and with a lot of technique and speed. An underrated player who works hard and is constantly grinding and putting himself in a position in the trenches to make a play. Katari can also see time on defense and does a good job but his best time on the field is spent on the offensive side of the ball.

Quinn Katz, 5’11, 265, DT/OL 2022 Calvary Christian @QuinnKatz
Primarily a defensive option who has a good work ethic and the ability to blow past opponents and make an impact in the pocket. He is an aggressive player who has a natural feel for the game and the size and power and force off the line to make an impact on both sides of the ball. He is a mobile player who can gain momentum as he goes and make blocks down the field and can also get to the backfield as a defender and create problems for ball carriers and quarterbacks.

Jake Palacio, 6’0, 285, OL, 2022, Monarch @palacio_jake
A tough player who has good speed and a lot of potential and play making skills at guard and nose tackle. He is very confident and is vocal and shows a lot of power off the line and the ability to win one-on-one matchups. He stays strong in the trenches but shows mobility and can get out and create holes for the run game but he is also capable of making strong plays defensively and can bring down opponents from behind and in head-on situations. A talented athlete who can pull down opponents and also stand his ground.

Aris Skarecki, 6’2, 285, OL, 2022, Stoneman Douglas @ASkarecki
A strong and thick player who plays above his listed height and weight. He’s a quick player at center and he can be counted on to lay out opponents and help his teammates hold back the extremely aggressive interior rushers. Skarecki is a motivated player with a good work ethic and a versatile skill set and he is looking for areas to work and improve and he targets those areas during the off season. A hard-nosed player who can push himself throughout a game and is constantly driving opponents back.

Dylan Spaeder, 6’4, 290, G, 2022, Monarch @spaeder_dylan
A good sized prospect who has increased in height and overall weight. He has good hands and is continuing to work on his technique and first move after the snap and shows development overall. He is a tough player with a willingness to improve and shows the ability to both create for the run game and stand up opponents and keep them out of position and away from the quarterback, both when he is looking to scramble and when he is staying strong in the pocket. A player who has some mobility and power and can play physical until the whistle blows.