Six Star Football takes a look at several of Broward's rising QB prospects in the 2023 class. 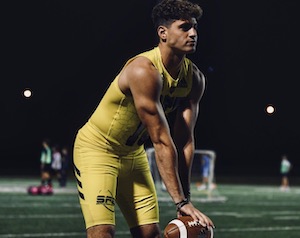 These rising prospects are among many in the 2023 class to watch this spring and summer as they gear up for their junior season. Already several prospects have caught the eye of college programs, either picking up Division I offers or have drawn significant interest.

Here, Six Star Football takes a look at several rising QB prospects in the 2023 class out of the Broward area.

2021 SIX STAR FOOTBALL FORT LAUDERDALE SHOWCASE ATTENDEES: Several of the athletes below have committed to attend the 2021 Six Star Football Showcase on May 30 in Fort Lauderdale. For more information about this event and to register, click here.

Malachi Clarke, 5’10,135, QB, 2023, Pembroke Pines Charter  @_MalachiClarke_
Clarke is a solid QB that shows some very nice leadership skills and ability to get the ball out quickly and into the hands of his skill players. He is a smart and cool player under pressure and he does a nice job of buying some extra time and scrambling in the backfield. He is a thin player but he has a solid arm. He shows good ball placement inside the numbers but can also make big throws down the field to his receivers in stride. A player who has made a lot of plays on his own and under pressure.

Jordan Faison, NA, QB/ATH, 2023, Pine Crest @Jordan6Faison
Faison is a nice all-around player who has a lot of spark and mobility. He can make plays in the pocket but is also capable of moving the chains with his feet. He runs well to the side and can make some solid throws down the field across his body and while he’s on the move. He’s an extremely quick athlete and one who can really light things up with his legs. A multiple sport, multiple position athlete and also a standout on the lacrosse team. He’s an interesting prospect with athleticism and a great deal of energy. 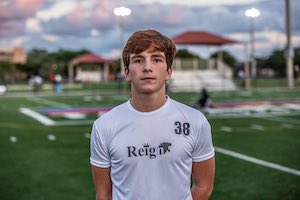 Luca Foerch, 5’11, 175, QB, 2023, Fort Lauderdale @FoerchLuca
A solid prospect who has the ability to air things out down the field. He’s an underrated player who shows the ability to step up in the pocket and make throws but can also scramble around and extend plays, buying time for his teammates down the field, but can also move things with his feet as well. That said, he’s a pocket passer and he has good arm strength and is a confident and capable prospect on big plays outside the numbers, but is also good at keeping things interesting underneath and across the middle of the field. In just four games he recorded eight touchdowns and had over 600 yards.
Photo courtesy of reign 7v7/@FoerchLuca 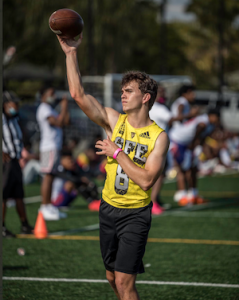 Collin Hurst, 5’10, 160, QB, 2023, Western @Collin_Hurst8
A strong and mobile prospect on the rise who has earned a host of honors at the county and the state level. He’s extremely quick at his position and shows great decision making when a play breaks down. The type of player who can beat opponents with both his arm and his legs and has a good upside and a lot of power and also strong ball placement both inside and outside the numbers. Last season he threw for 2,1008 yards and had 26 touchdowns and seven interceptions. He also rushed for 300 yards and had two rushing touchdowns.
Photo courtesy of Jay Wimbrow

Blake Murphy, 5’11, 170, QB, 2023, American Heritage @humble7qb
Murphy is an extremely talented prospect who has a nice combination of speed, creativity with the ball and arm strength. He’s a dual threat on the rise who shows a good feel for the position and the skills to make things happen on his own. He can find his receivers on the move and can make throws across his body and under pressure. He can also make plays in the pocket and has good awareness but his athleticism is what really stands out at this stage. He currently holds an offer from the University of Connecticut. 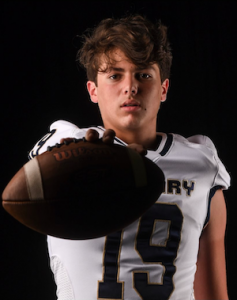 Asthon Redman, 6’2, 215, QB, 2023, Calvary Christian @AshtonRedman19
Redman is a nice dual threat QB option who shows a good deal of bounce and all around rhythm to the position. He can operate both inside and outside the pocket and can extend plays and give his teammates time to get open down the field. He’s also a player who can move the chains with his legs and shows good speed and a developing skill set moving forward. He has a good frame and he makes big throws down the line and shows improved ball placement both inside the numbers, underneath and on big plays for 20 or more yards.
Photo courtesy of @AshtonRedman19

Dylan
Rizk
QB | 6'2" | 190
Cardinal Gibbons | 2023, 6’2, 190, QB, 2023, Cardinal Gibbons  @DylanRizk11
Rizk is a confident prospect who shows the ability to stand in the pocket and make impressive throws down the field. A pro style athlete who has good size, a muscular frame and terrific ball placement both inside and outside the numbers. He has a high IQ for the game and the position and he understands timing and when to connect with his receivers. Rizk can make plays with his legs and is good at scrambling when a play breaks down but is at his best when he’s in the pocket and quickly checking through his progressions. He was name dthe Offensive Player of the Year for his performance last season with American Heritage as he completed 69 percent of his passes for 2,075 yards and 17 TDs. A player with a high ceiling and he already holds an SEC offer from the University of Kentucky.
Photo courtesy of @SouthFLExpress

Patrick Stepelton, 6’1, 180, QB/ATH, 2023, Cardinal Gibbons @PatrickStepelt1
An athletic QB prospect who has great footwork and timing. He is a skilled player overall who understands his position and how to scramble and buy time for his receivers. Stepelton has good size and great vision and he can work through his progressions. He has continued to work on his ball placement and he can spread the ball out and find receivers both outside and inside the numbers. He can even move the chains with his legs as well, a solid prospect on the rise who is sure to perform. He also reports an impressive 4.4 GPA.