Six Star Football takes a look at several WR prospects in the 2022 class. 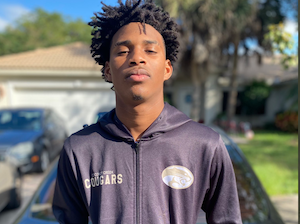 These rising WR prospects are among many in the 2022 class to watch this spring and summer as they gear up for their senior season. Already several prospects have caught the eye of college programs, either picking up Division I offers or have drawn significant interest.

Michael
Barnes
WR | 5'11" | 178
Coconut Creek | 2022, 5’11, 178, WR, 2022, Coconut Creek @Mikebarnesjr
Barnes is a multiple position athlete who can make plays as a ball carrier, a receiver and a blocker. He has a good frame and a lot of power and athleticism and shows the ability to force his way through contact and make big hits. He has good hands and can make catches both close to and away from his body and can fake out opponents and find separation using his speed. An all around prospect who has a good upside and currently holds offers from Arkansas and Florida Valley Prep and has received some interest from Tulane and East Carolina University to name a few.

Joseph
Kennerly
WR | 5'8" | 163
Deerfield Beach | 2022, 5’8, 163, WR, 2022, Deerfield Beach @KennerlyJoseph
Kennerly is a promising prospect who shows a good upside and a lot of power in his step. He can find separation using his speed and he understands how to get in position and use his frame to his advantage. An impactful player at slot who can be counted on play after play. He has a strong and muscular frame for the position and he is constantly showcasing his speed and strength in real time. A big stock riser with great hands and a creative spark on the move and with the ball. He currently holds an offer from the University of Maryland.

Jullian
Lewis
WR | 6'2" | 200
Western | 2022, 6’2, 200, WR, 2022, Western @jumpboyyjuuu
Lewis is an intelligent and elite prospect who shows the ability to showcase his speed and athleticism on nearly every play he’s targeted. He shows bounce and quickness and can fake out opponents and find his way through traffic without being touched. An impressive athlete and receiving option who is an extremely difficult prospect to stay in front of and tackle and shows strong high point skills as well. Lewis currently holds offers from Georgia Tech, Southern Miss, Boston College, UT Martin, Rhode Island, Coastal Carolina, Kentucky, Pitt, Syracuse, Arkansas, Buffalo, West Virginia and Cincinnati. 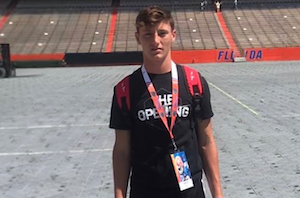 Logan
Miller
WR | 5'10" | 160
Western | 2022, 5’10, 160, WR, 2022, Western @Loganmillerx
An extremely quick and athletic prospect who can fly around the field and get open and provide quarterbacks with an easy target. Miller runs terrific routes as a receiver and shows the in-game quickness and all around productivity to keep turning heads. He has a thin yet strong frame and he can make things happen after the catch as well. He’s a physical player who has great hands and terrific footwork and shows a lot of precision in his game. He values technique and timing and shows a good upside as an athlete. 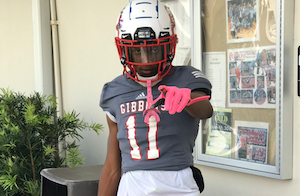 Gabriel Morgan, 6’0, 167, WR, 2022, Cardinal Gibbons @ymhgabriel
Morgan is an underrated receiver for Cardinal Gibbons who has size and quickness after the catch. He can operate out of the backfield but is also a way downfield threat. He can see time as a slot and outside the numbers and he has a good feel for the position and good hands. He shows a nice combination of size and length and speed with the ball in his hands and can outrun opponents who are coming after him and find his way to the end zone. a developing player to keep your eyes on moving forward.

Devaughn
Mortimer
WR | 5'11" | 160
Dillard | 2022, 5’11,160 , WR, 2022, Dillard @MDevaughn22
An explosive playmaker who shows terrific speed and the ability to find separation. He is great at out running opponents and can be seen diving out and making terrific circus-like catches. He shows a high ceiling as a player and has a terrific understanding for the slot position but can also operate outside the numbers as well given his speed and ability to make plays through the air. He is an offseason standout as well and he reports a 4.43 40 yard dash and a 10.82 100 m dash. Mortimer currently holds offers from Kentucky, Syracuse, Arizona State, Buffalo, Texas A&M, Penn State West Virginia, Maryland, FAU, Indiana and Coastal Carolina.

Lamari Penaloza, 6’0, 170, WR, 2022, Coconut Creek @PenalozaLamari
A talented playmaker who shows good speed and hops. He can make plays in the end zone and shows good hands as well. He makes catches above his head and away from his body and shows some high point skills in contact situations. Penaloza has good speed and he has added weight and more muscle mass over the offseason and he plays physically where he needs to. A player with speed and creativity and the skillset and productivity that makes him a threat defenses need to keep their eyes on.

Jacolby Spells, 6’0, 180, WR/DB, 2022, American Heritage @drippy4k_
An elite prospect who can make plays on both sides of the ball. He shows terrific speed and in-game quickness and has the natural ability that can’t be taught. He has a high IQ and can make plays as a receiver and DB and can show up and show out in a way that is all his own. He is great at anticipating plays and can read a quarterback and deliver jarring hits as receivers look to catch the ball. An extremely creative player on his own who can handle any one-on-one situation that comes his way. Spells currently holds offers from Virginia, Ole Miss, LSU, Auburn, Vanderbilt, Miami, Indiana, Toledo, Syracuse, Arizona State, Arkansas, Louisville, Kentucky, Penn state, Michigan State, Cincinnati, Georgia and Oklahoma to name a few.

Jacob Love, 6’3,175, WR/FS, 2022, Somerset Academy @jac0b_3k
Love is a talented and underrated player at wide receiver who can also see time as a safety. He has great size and length and a large catch radius and shows quickness both in straight line situations and when dodging would be tackles. He can go up and make terrific catches along the sideline and can make a lot of play through the air. He has a good upside and a large catch radius and shows a good work ethic in the weight room and during the off season. He is a long ball threat but can also operate well underneath. He reports a 4.6 40.

Mason
Taylor
TE | 6'2 | 225
Ladue | 2022, 6’5, 230, TE, 2022, St. Thomas Aquinas @MasonTaylor52
Taylor is a skilled and athletic prospect who has a great combination of size, strength and all around play making skills. He can move opponents out of the way and is a strong blocker and is also a talented receiving option as well. a physical prospect with a great demeanor and a high IQ and he is constantly showcasing his all-around athleticism and leadership. a workhorse in the weight room and during the offseason who reports a 4.8 40 yard dash. Taylor currently holds offers from Memphis, Appalachian State, Arizona, Tennessee State, Texas A&M, Miami, Pittsburgh, Illinois, Syracuse and FIU.

Tyreik Thorpe, 5’9, 170, WR, 2022, Chaminade-Madonna @Youngin_tray
Thorpe is an underrated and under recruited prospect who has strong athleticism and a natural ability to find the end zone. He is a quick player with a lot of upside and shows a high IQ and the ability to avoid contact and find separation. He can break away from opponents who are looking to slow him down and can step inside and then back out again as he dodges would-be tacklers. Thorpe can make plays as a slot receiver but he has the athleticism and the game for outside the numbers play and he shows a nice combination of bounce and high point skills.

INVITEE SPOTLIGHT: Up close and personal with Guy Edmond Jr (2024)

INVITEE SPOTLIGHT: Up close and personal with Dominic Webb (2022)

INVITEE SPOTLIGHT: Up close and personal with Bryson Goodwin (2024)

INVITEE SPOTLIGHT: Up close and personal with Ean Pope (2023)