Six Star Football takes a look at several WR prospects to know in the 2022 class. 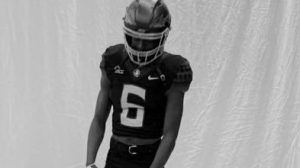 These rising WR prospects are among many in the 2022 class to watch this spring and summer as they gear up for their senior season. Already several prospects have caught the eye of college programs, either picking up Division I offers or have drawn significant interest.

Chris Cepeda, 5’10,160, WR/FS, 2022, Stoneman Douglas @CepedaCros
A versatile athlete who shows good speed and the ability to track a ball. He can find his way around the field and can get open as a receiver. He is a strong player who shows good footwork and vision for his size and he has good hands and athleticism as well. Defensively he shows a hard-nosed mentality and he has a way of making tackles on his own and keeping receivers out of play. A technical player who really plays well wherever he’s placed. He reports a 4.7 40, 29.8 vertical, 200 bench, 300 squat and a 325 deadlift.

Elisha Ewards, 6’2, 200, WR, 2022, Cardinal Gibbons @ElishaEdwards13
Edwards is a strong prospect who has the ability to make catches in space and create with the ball in his hands. He is a talented athlete who has underrated speed and can fake opponents out and then find his way to the outside. He makes solid plays after the catch but can absorb contact well at the point of contact and still maintain control. He has a large catch radius for the position and shows a lot of upside and precision in his routes. An underrated prospect who has a solid skill set and good leaping ability.

Darryl Garrett, 6’2, 185, WR, 2022, Dillard @Darrylgarrett13
Garrett is a first option receiver who can beat opponents in one-on-one situations. He has good hands and a smooth ability to turn and make catches in the end zone. Garrett has good size and athleticism and can jump up and make catches but also looks to position himself so he can make easy plays in open field situations. A nice player who likes to work on the outside and can be counted on to get open and then make plays on his own. Also a player who can simply get the ball quickly and then  create.

Lavonte Givens, 6’2, 205, WR, 2022, Hallandale @_Hollywoodv_
Givens is an underrated receiving option who has good size and speed and can sprint past DBs and catch the ball on his opponent’s back shoulders. He shows a nice combination of speed and athleticism and in-game quickness that can see him get a step on defenders immediately after the snap. He has a good upside and a developing skill set that will likely improve the more he sees action on the field. A player who can operate as a first option receiver or a slot receiver and will find success wherever he’s placed.

Amariyun Knighten, 6’1, 165, WR/DB, 2022, Stranahan @AmariyunK
A good overall athlete who can make plays on both sides of the ball. He has good hands and can make things happen through the air. He covers ground quickly and looks to apply contact and read a quarterback when playing on defense. He can create with the ball in his hands and shows good touch as a receiving option and can be counted on to make plays after the catch as well. A player who moves well in space and has quickness and physicality.

Wyatt Norris, 6’4, 190, WR, 2022, Westminster @WyattNorris15
Norris is a good sized prospect who has good length and hand skills as well. He can use his frame to his advantage on the outside and shows toughness and reliability as a receiving option. He’s a first option player given his frame and he has underrated speed and creativity one he has the ball in his hands. A player who can also see time at other positions but his work as a receiver is where he plays his best. Norris can slip past defenders and can find ways to go overlooked and then turn on his speed and make big gains.

Mason Phillips, 5’10,160, WR/FS, 2022, Coral Springs Charter @MasonPh78774159
Phillips is a quick player who has the ability to make plays in special teams and on offense. He has good hops and shows athleticism and strength and has the kind of speed that shows up in a variety of ways on the field. He’s a good sized prospect and has good blocking skills for a receiver. He can catch passes in stride and continue down the field but is also capable of waiting underneath or catching passes out of the backfield and then creating for himself, using his blockers when he can but knowing that he has a green light to improvise.  He also reports a weighted 3.9 GPA.

Chris Spencer, 5’8,151, WR, 2022, Stoneman Douglas @14gobrazyyy
Spencer is a quick prospect who has the ability to surprise defenders who don’t keep their eyes on him. He is a strong player for his size and has good balance and he runs his routes well. He shows some bounce and is very tough and is capable of catching the ball underneath and then creating on his own but is also a long ball threat given his ability to find separation and then breakaway from defenders after the catch. An underrated prospect who plays above his listed height.

Dalan Thornton, 5’10, 160, WR, 2022, Everglades @D2For6ix
Thornton is a two-way prospect who can create his own opportunities offensively but is a strong defensive option when he sees time as well. He has good speed and can operate both inside and outside the numbers and has a way of extending his body to bring down the ball. He has good speed and is athletic and has a solid catch radius and he is constantly putting in the time to show out against top competition. He has a good work ethic as well and he understands his role as a receiving option and he’s good at putting himself in positions to make an easy target for the quarterback.

De’Quan Williams, 6’3, 175, WR/FS, 2022, Fort Lauderdale @6WilliamsDequan
Williams is a two-way athlete to keep your eyes on who has good size and length. He has a versatile skill set and a lot of upside and will likely continue to develop and improve the more he is targeted and the more he sees action. He can move well vertically and has good instincts both with and without the ball in his hands. A player who can use his frame to his advantage and his length and shows toughness as well. An underrated player overall.

Kyle Williamson, 5’9,156, WR/RB, 2022, Coral Glades @Kylewilliamso21
Williamson is a timely player who has to be counted on as a potential threat both as a rushing and a receiving option. He shows good balance and flexibility for both positions and can use his speed and footwork to find separation and then break away from linebackers. He has a high IQ as a receiver and the ability to process information in real time and shows good instincts when defenders look like they’re closing in on them. He can play physical and powers through contact but also shows some escape ability.