Six Star Football takes a look at some 2023 prospects on the rise. 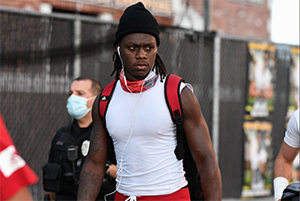 These rising WR prospects are among many in the 2023 class to watch this spring and summer as they gear up for their senior season. Already several prospects have caught the eye of college programs, either picking up Division I offers or have drawn significant interest.

Here, Six Star Football takes a look at several rising prospects in the 2023 class out of the Broward area.

Jacob Aguiar, 6’3, 225, TE/WR, 2023, Westminster Academy @AguiarJacob
Aguiar is a good sized athlete who shows some play making ability as a receiving option. He’s seen varsity action as a freshman and shows a lot of potential given his frame and overall catching and blocking ability. He has good size and good athleticism and gets off the line quickly and can make moves in one-on-one situations. He has good upside as well and shows a frame that will continue to add weight and muscle but he should be able to still rely on his speed.

Brandon Armenteros, 6’2, 185, WR, 2023, Pembroke Pines Charter  @htg_brandon
A big and physical prospect who has a good upside as an athlete. He has good hands and a long and physical body and one who shows good balance and a lot of potential moving forward. He is a multiple sport athlete who shows a nice combination of size and strength and athleticism. He can make plays through the air and make strong catches with either hand and can turn and stop and start and then create with the ball in a way that usually leads to big gains down the field. An open field threat who plays hard and shows speed.

Will Bankston, 6’1, 175, WR, 2023, Chaminade-Madonna     @1kwill1
A fine athlete with good speed and length and versatility. Bankston is the type of player who can be counted on to make catches both in stride and underneath. He can lose opponents in one-on-one situations and in his routes but is also a creative player who can swirl around and get open when the quarterback is scrambling. He is a quick player and has a good natural rhythm and he shows a good upside giving his athleticism and natural speed and overall play making ability with the ball.

Christopher
Brown
WR | 6'3" | 170
Somerset Academy | 2023, 6’3, 170, WR, 2023, Somerset Academy @nitrobaker1503
A big, timely player on the rise who can show up on special teams, on offensive and on defense. He does a bit of everything well and he shows a fluid nature on both sides of the ball. He passes the eye test and has the athleticism and length needed to make plays. He can find his way to the end zone and is a scoring threat and just has a way of coming away with yards when targeted. He’s also good at tracking the ball and making plays defensively and can come away with interceptions and then look to return.

Isaiah Hardge Jr, WR, 2023, St. Thomas Aquinas @KZIsaiah1
A quick and extremely fluid athlete who shows the ability to make plays as both a receiver and occasionally a defensive back. He is strong and has good size overall and is the type of elite player that will continue to develop as he ages. He has a good frame and a lot of speed and can operate well both inside and outside the numbers. A first option receiver who is also an extremely reliable blocker and a strong player as well who shows athleticism and upside. He currently holds offers from Syracuse University, the University of Mississippi and the University of Maryland.

Arthur “AJ” Jenkins, 6’3, 197, WR, 2023, Cardinal Gibbons @jenkins_3rd
A tall and athletic player who shows attention to details. He is a motivated player and one who is spending time working on both the technical aspects of his game as well as his strength and conditioning. He has great overall size and length and has good hands and the type of frame and athleticism that usually translates to easy targets. He shows good timing and has an increased catch radius on the move. Also a player who can turn and extend to come down with the ball as well. A nice athlete and a hard-working prospect.
📸.  Photo courtesy of Arthur AJ Jenkins

Miles Moss, 5’10, 156, WR/ATH, 2023, Calvary Christian @_milesmoss1
Moss is a hard-nosed athlete who shows a willingness to put it all on the line and continued to play through a hamstring injury he suffered early in the season last fall. He can see time in a variety of positions and he looks well as a ball carrier and a receiving option. Moss has good movement and some upside as an athlete as he continues to develop physically. He has increased his overall size and muscle mass and maintains his speed and productivity. He has a good upside given his work ethic and frame and he is a motivated player who brings everything he has to the field. While Moss can seemingly play any position on the field we like him as a slot receiver where he can use a low center of gravity and excellent quickness to gain separation.

Aidan Norcius, 5’11, 168, WR/ATH, 2023, Dillard @AidanNorcius3
A strong and athletic prospect who has the ability to see time on both sides of the ball. He has good instincts as a receiver and shows a lot of attention to details. He can run a clean route and has creativity after the catch. He’s also found some time as a safety and shows a lot of potential on defense. He is a scrappy playmaker who can read the quarterback and get to the ball and play physical at the point of contact. A player with high point skills and athleticism and good overall size and length and a high IQ as well.

Jacob
Pion
WR/TE | 6'1" | 190
Pine Crest | 2023, 6’0, 180, WR/LB, 2023, Pine Crest @jacobpion
Pion is a multiple position player who has good speed and versatility as an athlete. He shows the ability to make plays as both a wide receiver and a linebacker and has a versatile skill set and good athleticism. He runs hard and shows up in the offseason and is constantly working on his speed and his overall physical ability. Pion is an improved prospect and one who has good hands and the ability to read a defense and operate well. He had some home run plays last season and scored three touchdowns and was 5/5 and had 209 receiving yards.

Collin
Teschky
WR | 5'10" | 145
Coral Springs Charter | 2023, 5’9, 145, WR/DB, 2023, Coral Springs Charter @CTeschky
|A multiple position athlete who can cover receivers and make some impressive catches himself. He has good hands and an eye for the ball and can operate both inside and outside the numbers. He can take some big hits at the exact moment he makes contact with the ball and he is good at securing the ball and maintaining control. Teschky is a fast player and can outrun the ball at times, but he has good hands and can slow down and make the catch and then create and make moves in space. A solid playmaker who can make catches without using his body.

INVITEE SPOTLIGHT: Up close and personal with Dominic Webb (2022)

INVITEE SPOTLIGHT: Up close and personal with Bryson Goodwin (2024)

INVITEE SPOTLIGHT: Up close and personal with Ean Pope (2023)