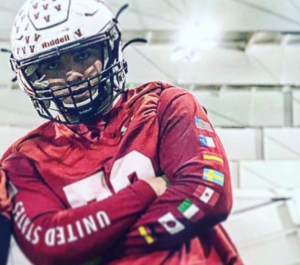 The Central Florida region features several of the state’s top prospects at a variety of positions across the board. With summer camps and combines heating up, Six Star Football is taking an inside look at the prospects college programs are looking at this offseason.

Here, Six Star Football takes a look at several DE  prospects to know in the 2022 class in the Heartland, Mid Florida, Orlando and Spacecoast  areas.

Emmitt Beck, 6’5, 200, DE, 2022,  Sebring @emmitt_beck
A quick athlete with great size and the ability to make plays on the ball. Beck has a great frame at 6’5, 200-pounds and shows a lot of promise given his make-up and all-around productivity. He is the kind of athlete who always seems to outrun and get around his opponents and would-be blockers. He runs hard and moves his feet well and looks to stay wide or cut inside and move his way into the pocket. He can make plays on the strong-side or the weak-side, wherever he sees time he makes plays. Beck has been extremely invested this offseason and has shared multiple workout sessions showcasing his speed, strength training and footwork.

Nickayda Brantley, 5’11, 225, DE, 2022,  Lakeland @NickaydaB
A nice player who can see time as a DE or a DT. Brantley  has a solid frame and can slip through coverage and continue his way to the pocket. Brantley has good balance and doesn’t worry about one-on-one matchups. He is listed at 5’11, 225-pounds and he is solid and he has a way all his own that helps him push off blockers and then readjust himself as he gets close to the ball carrier. Brantley has potential as a prospect and a frame that will likely continue to add weight and he is aggressive and brings a great work ethic.

Mekhi Brown, 6’2, 185, DE, 2022,  Hardee @khiibrown24
A solid athlete with good size and an emerging skill set. Brown can see time as DE, DT and even as a LB. He has good footwork and gets off the line well and he continues to push and fight his way back. Another edge rusher who looks to use his speed and long strides to cover ground quickly and looks to outrun and opponents wide and then cut in and get to the ball carrier or make contact with the QB. He saw time as a strong-side defensive end his sophomore year and he improved the more he was on the field. A 6’2, 185-pound athlete who can also shed tackles and force his way up the middle as well.

Max Dulansky, 6’1, 235, DE, 2022, Freedom @Max58879774
A physical, good-sized defensive threat who has a good upside and shows a strong work ethic. Dulansky is a player for Freedom who packs a punch. He has solid upper body strength and can fight his way through players who have a height and weight advantage on him given his strength and muscle tone. He’s listed at 6’1, 235-pounds and he has strong arms, hands and is also a solid blocker on the offensive side of the ball. A physically developed player for his age who has power, seasoned strength and a self motivation and drive that keeps coming off the strong and weak side.

Michael Flaskey, 6’2, 225, DE, 2022, The First
An athletic option on the edge who has a high IQ for his position and the game. He likes to use his speed off the line and looks to blow by would-be blockers and get where he needs to go. Flaskey is listed at 6’2, 225-pounds and he is improving his speed and decision making after the snap. An interesting player who gets better the more he sees action and shows a lot of hustle and a good understanding for his job and how to adapt to the situation.

Rey Graciano, 6’0, 200, DE/LB/TE, 2022, Cypress Creek @rey_graciano
Graviano is a calm and patient player who has good size, a strong frame and the strength and hustle to make plays down field and up at the line. He reads the QB well and isn’t easily fooled by fakes and false routes. He keeps his eyes locked on the ball and is good at jumping past dueling lineman and getting stops for a loss. A 6’0, 200-pound player who has good footwork, strength and the kind of game and playing time that most senior players get. Graciano is an intelligent player who sees time as both a DE and a MLB on defense. A solid player who shows versatility that you should keep your eyes on.

David Jenkins, 6’0, 233, DE/G, 2022, Victory Christian @breadwiner40
A three sport standout who shows good strength and athleticism. Jenkins is a solid player who has good physical traits and is aggressive and has a way of getting through contact situations and still getting to the ball carrier. A run-stopper on defense who sees time as a weak-side edge rusher and a strong side one as well. He can also see time as an interior rusher and has the physicality and power needed to push off guards and apply strong pressure to the pocket but also looks to create his own holes and push opponents back on offense. An up-and-coming prospect who works hard and looks to fight and be productive wherever he’s placed on either side of the ball. Jenkins reports a 5.2 40, a 375 squat and a 255 bench press.

Brendan
Flakes
OL | 6'5" | 245
Lake Minneola | 2022, 6’4, 244, DE/TE, 2022, Lake Minneola @turnupbren
Also a track and basketball standout, Flakes is an intelligent, physical playmaker on the edge who can also see time as a TE on offense. He has great size at 6’4, 244-pounds and can run over opponents and move them out of play and even turn them around on his way to the backfield. An aggressive force who holds his weight well and understands how to use his frame and shoulders. Flakes has been extremely active this offseason at showcases, combines and has also posted several workout sessions to social media on his own. He has been targeting his speed, footwork and conditioning which benefit him in all three sports he sees time in. Also a standout student in the classroom. Flakes reports a 3.9 GPA.

Nick Furry, 6’1, 220, DE/RT, 2022, Lake Highland
A solid two-way player who has a frame that allows him to see time on the field on both sides of the ball and during special teams plays. As a defender he looks to target the ball on tackles and he can punch it out of the hands of his opponents. He wraps up players and can also see time as an interior rusher. He looks to avoid contact and make his way up the pocket and can also get hits on the quarterback. A young player last season who saw a lot of playing time.

Drake Harwell, 6’1, 215, DE/LB, 2022, Lake Minneola @Drakeharwell
A multiple position defensive option who has a good frame and a flexibility as a prospect. A first team All-County player at 6’1, 215 who sprints through the line and can make strong tackles in the pocket. He has a way of getting to the QB and when he’s locked in and at his best he can make plays quickly and drive the QB into the dirt. A lean and muscular player who is not maxed out physically and will likely continue to add muscle to his frame. He has a lot of power for his size and because of it sees action as an interior lineman. Harwell reports a 315 bench and a 440 squat as of last report. He is also a standout student in the classroom and reports a 3.6 GPA.

Quentin Joiner, 6’4, 240, DE/DT, 2022, Sebring @Quentin84321028
A leaner, faster and more developed prospect than he was a season ago who shows potential as a defensive prospect. Joiner is a player with good size at 6’4, 240-pounds and he can gain momentum down the field and drag down an opponent. He reports a 4.97 40 yard dash, a definite improvement from his 5.45 reported time last summer. Joiner targets the ball with his first and he is good at leaning on opponents and then adjusting himself and targeting the ball and the carrier. A solid player who sees time as a weak side and strong side edge rusher but also has the frame and ability to power up the middle.