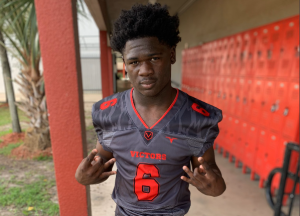 The Southeast Florida area features several of the state’s top prospects at a variety of positions across the board. With summer camps and combines heating up, Six Star Football is taking an inside look at the prospects college programs are looking at this offseason.

Here, Six Star Football takes a look at several young RB prospects in the 2023 class in the Miami area to know.

AJ Balsera, 5’10, 160, RB, 2023,  Belen Jesuit Prep @ajbalsera15
A very fine athlete and a two way standout that is effective on both sides of the football, Balsera safety/running back in the class of 2023 that runs a 4.9 in the  40 yard dash and has a very impressive 34 inch vertical, 250 squat and a  300 deadlift.  One of those guys that will be looking to make a big impact in the upcoming 2020 season and a guy that has all the athletic tools to be a top notch RB and DB prospect.

Jayvant Brown, 6’1,195, RB, 2023,  Deerfield Beach @JayvantBrown
One of the nation’s top running backs and a guy that is as explosive as they come, Brown has already landed an offer from Arizona State and is climbing the ranks for big time looks every time he steps onto the football field.  A great with some great vision, super elusive and a great vision on the field makes for a dangerous combination and an elite prospect that the entire country will be looking at.  Watch out for Brown in 2020 to have a super sophomore season for Deerfield Beach.

Ryan Bullard, 5’10, 185, RB, 2023,  Killian @bullard78
When you are a freshman and you have 1,100 yards rushing and 20 TDs you know you are the real deal and a guy that can make it happen time and time again and Bullard is that back, an elite and explosive play maker that is very hard to tackle and really turns on the jets on the field.  His elite speed and ability will no doubt make him that upper elite play maker that everyone will want at the next level, Bullard  could be the best back in the class of 2023 and is for sure a guy that is an amazing talent worth watching. Bullard has received offers from West Virginia, Ole Miss, FIU, Maryland, Penn State, Tennessee, Miami, Nebraska, Texas A&M, and Florida.

Michael Caldwell, Jr. 5-7, 160, RB/CB, 2023,  Saint Brendan @Michael88333799
Another impressive speedster in the class of 2023, Caldwell already runs around a 4.63 in the 40 yard dash and has great speed as a freshman play maker and runner.  We like Michael’s ability to change direction, use elite speed and breakaway level of another gear and a guy that can explode through the holes are some of his many top notch skills to being an elite class of 2023 runner on the make.

Jerry Dinkins III, RB, 2023,  American Heritage @3Dinkins
Big time hit the hole fast guy, can go straight up the field in the blink of an eye.  A guy that you watch and his is getting 5 and 6 yards without anyone close to him which gives you a good idea of how swift footed he really is.  A gear that is set on fast mode and a player that is a back that can make the big yards in a hurry.  A guy that has a big time future ahead and one of the top ground gainers in this elite back class of 2023.

Jonathan Fernandez, 5’6, 154, RB/OLB, 2023, Key West @young_trap24
Can affect the game and make an impact in many different ways at Key West, a change of pace guy that also excels as a kick return specialist with speed down the field that is hard to catch, likes to get to the outside lanes and outrun the competition for big breakaway plays.  A guy that is a good runner in space and knows how to shake and bake to make big plays and extra yards.

Mark Fletcher, 6’1, 185, RB, 2023,  American Heritage @fletcherjr_mark
A big time speed rusher that loves to get outside and outrun everyone down the field and with his speed and quickness out of the backfield you won’t catch him very often.  A guy that has a large stride and can make up the ground in a hurry and a guy that has speed you can’t match up with in the open field.  Huge things in store for one of the elite RBs in Florida and a guy with a load of college talent and early offers that have rolled in. Recent offers from Tennessee, Toledo, UAB, Minnesota, FIU, Florida State, Florida, Penn State and Miami just to name a few of the many.

Jamari Ford, 5’7,169, RB, 2023,  Booker T. Washington @day1mari
You have to love just how great of a natural athlete Ford is and what he brings to the table as a runner out of the backfield for Booker T. Washington. Ford has some of the best hands and is a good receiver as a RB no questions. A guy that can stop and make cuts on a time and a guy that has some of the best feet in Florida football.  One of those guys that can motor down the field and is a very impressive all around athlete.

Andrevis Grant, RB/DT, 2023, Southridge @AndrevisGrant
Grant is an all out very impressive looking athlete, a big guy with a soft set of hands that can roll out of the backfield and be like another WR or TE, very good speed for a big man that runs well in space and is very capable of making some big time plays as well as being a pure punishing big runner that will make you pay the price when you try to make a stop on him.  One of those unique athletes that is very impressive with size, speed and skill.

Andre Hall RB 2023 Hialeah Miami Lakes @maj0r_1
For sure already has the lean and mean college back build already as a freshman in highschool, Hall looks to be a very dangerous play maker in the upcoming 2020 super sophomore season ahead.  Hall is a player that can use elite speed as a huge asset to his game, one of the most dangerous kick return specialist you will ever see as a true freshman, Hall is a player that will flat out blow by you out of the backfield and is a guy that is in for a big time career.

Sedrick Irvin 5’10, 180 RB/SS 2023 Gulliver Prep @sedirvin1
Has that great vision and instincts with the football you really like to see, will blow past you with very fast speed for huge gains.  Is a running back that is very patient and waits for holes to run through the breaks off for huge gains with his next level speed. A guy in the makings of being one of the diamonds to know in Florida in the 2023 class, Irvin has all the makings of stardom ahead.
Holds offers from West Virginia, Cincinnati, Florida State, Tennessee, Oregon, FIU, Nebraska, Duke, Ole Miss, Miami, and Penn State have offered Irvin.

Antonio Rubio, 5’7, 149, RB/DB, 2023, True North Classical @AntRubio23
An elite athletic that runs a 4.6 in the 40 yard dash and has a 32 inch vertical, certainly pure athletic skills separate Rubio from a lot of the class of 2023 RBs in the state of Florida and make him one of the best of the best. Lean body type and a player that really sees the open holes very well and is a good vision and react back that can see whats in front of him and then make good choices for his running lanes.  For sure a play maker to know in the backfield and in the class of 2023.

Amari Swain, 6’0,210, RB/LB, 2023,  Monarch @AmariSwain2
Swain is already one of the bigger backs with a 6-0 210 frame colleges are taking notice of his size plus ability which means great things are likely in store for this big and talented class of 2023 RB prospect. Runs a 4.62 in the 40 yard dash so a guy already hitting some very impressive speed numbers in his first season.  Also a tough nosed LB as well on the defensive side of the football for Monarch.

Santana Wooten, 5’10, 173, RB/LB, 2023, Palmer Trinity @santana_wooten
Made the FACA All District team as a freshman and is a running back that will look to get more and more attention with experience and playing time.  Wooten is a back that can catch the ball and has some nice soft hands out of the backfield, then has some of the best open field moves of any back in the class of 2023 and is a wirey and tough player to tackle and wrap up against once he gets loose in the open field. 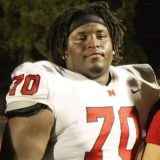