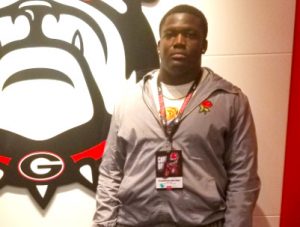 Six Star Football takes a look at several of the Panhandle and Big Bend area’s top rising defensive line and defensive end prospects to know in the 2021 class.

Khamari Brown, 6’2, 260, DE/DT, 2021, Wakulla @Khamari_Brown5 (pictured)
A transfer from Leon, Brown is an extremely underrated playmaker who has good strength and physicality. He has a lot of potential in his game and shows solid in-game quickness, decision-making and the ability to blow past blockers and disrupt plays and get to the QB. He is quick on his feet and aggressive and holds his frame well. An intriguing prospect at 6’2, 260-pounds who has great upper body strength and can grab an opponent from the side or behind and throw them to the ground with force. He has been putting in the time this offseason and has been posting workout sessions showcasing attention to his footwork, overall conditioning and technique. At last report he has a 28 vertical, 4.7 40, a 315 bench, a 475 squat and a 525 deadlift.

Brian Crumity, 6’0, 265, DT/G, 2021, Jefferson County @Brian_Crumity
Crumity is a strong player for Jefferson County who can be counted on to make plays in important games. He is listed at 6’0, 265-pounds and can sell fakes and then power through on his opponents weak side. He has strong arms and good upper body strength and can push opponents back. He also has good speed in space and can catch up to QBs or ball carriers and he dives out at their feet to trip them up. Also a player who can make strong hits in space as well. A solid defensive player who continues to push himself. Crumity currently holds an offer from Florida Memorial University.

Payton Lambert, 6’1, 260, DL/OL, 2021, St. John Paul @11PaytonLambert
A tackle on both sides of the ball who shows a good deal of hustle and knack for being in the right place at the right time. He has good hands, a lot of burst off the line and can take opponents by surprise and get past them and to the pocket. Although he missed five games last season he was still able to make a lot of noise on the offensive side of the ball recording 30 tackles, 12 tackles for loss, one interception and one sack. Lambert has increased his overall weight and strength this offseason making him a more threatening piece for St. John Paul up the middle. He’s an underrated prospect due to his size but his productivity and natural feel speaks for itself. Lambert reports a 3.1 GPA.

Greg Mitchell, 5’8, 192, DE/FB, 2021, Madison County
A strong and physical two-way player who has the speed and creativity needed to make plays on both sides of the ball. He’s a solid playmaker as a LB who can command the middle but also get up and even see time as a DE as well. He has great hands and great lower body strength and he has the power and force that helps him make an impact on both sides of the ball. He can stand up opponents when he looks to block for the QB and can keep them out of play and away from the ball. An underrated athlete and ball carrier who can blow past opponents, stay on his feet, push his way for a first down and make strong tackles on rushers up the middle.

Tanner Morrison, 6’2, 235, DT/DE, 2021, Florida State @TannerMo45
A multiple position defensive threat who looks to avoid blockers, shed tackles and drive opponents into the dirt. He sees a lot of action on the field due to his productivity and size and he is constantly working and looking for ways to improve his game. Morrison is listed at 6’2, 235-pounds and he brings a nice combination of speed, toughness and a relentless nature to the field.  He had a strong showing his junior year and was good at making tackles on his own and helping his teammates finish plays. He recorded 44 total tackles last season and had 28 solo, three sacks and one caused fumble. An underrated prospect with good leadership qualities and a high IQ. Morrison reports a 3.1 GPA.

Charles Trumbull, 6’3, 250, DE/DL, 2021, Bozeman @Charlestrumbull
A big offseason for Trumbull as he has picked up four offers from Pudget Sound, Carthage College, Grand View and Baldwin Wallace University. A large prospect with good size, physicality and an overall strength and toughness that stands out play after play. He’s listed at 6’3, 250-pounds and he plays fast off the ball, makes plays as an edge rusher and can stop ball carriers. He has a knowledge for the game and is great at being physical and playing with an edge. A 3x all-county, a 2x all-district and a defensive player of the year honoree who recorded 78 total tackles, 43 solo, and had three fumble recoveries last season. Trumbull has been putting in a lot of time this offseason and has been posting workout sessions on social media with attention towards his footwork, conditioning and strength training. He reports a 38 vertical, 5.0 40, 240 bench, 400 squat and a 475 deadlift.