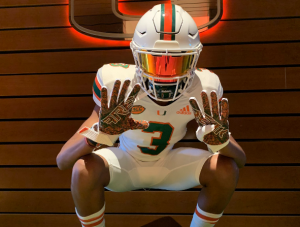 Here, Six Star Football takes a look at several young safety  prospects in the 2023 class in the Southeast Florida region to know.

Stanquan Clark 6’2, 185 SS/FS 2023 Killian @moneymannquann
Could be the most eclectic player defensive star in Florida right now and only freshman, he is a scarry good prospect already, a huge closer with major speed and a guy that can cover 5-6 yards in the blink of an eye.  A pure powerful hitter that goes right through guys and a guy that is like a hybrid LB spy that can pick off passes or be a pass rushing threat off the edge that is unstoppable.  Has offers from West Virginia, Pitt, Georgia Tech, Florida, LSU, Texas A&M and Miami are all impressive recent offers just to name a few that Clark has received.

Kavoris Dean 6’2, 185 SS 2023 Atlantic @DeanKavoris
A very big DB at 6-2 means everyone will want to take a look at this big ball hawking DB prospect from Atlantic and as well they should with his great footwork and ability to read the QB and make plays and react very quickly while the football is in the air, Dean is a big guy that has future star written all over him and is a player that we could see rising to the top of the list with his speed and size, unlimited potential for this great looking ‘23 DB.

Daemon Fagan 6’2, 160 SS 2023 American Heritage @DaemonFagan (pictured)
At 6-2 Fagan is another of Florida’s best when it comes to play making big DBs on the rise that are getting big time attention for size plus ability.  Fagan is a player that can use long legs and a very long stride to run and keep up with just about any WR he is matched up against and can cover some major ground on the field, making him a pickoff threat on each and every pass that is up in the air in his area.

Christian Lowry 5’7, 158 FS/WR 2023 Saint Brendan @ChristianLowry8
Despite not being one of the bigger DBs, Lowry does have one of the most athletic builds and shows a great knack for making hard plays look easy.  Lowry is a player that is one of the best all-around tacklers in the class of 23 and is a player that shows a very fast burst of speed off the snap as well as a great ability to make up ground and space to be a major threat in the secondary unit and provide another run stopper and pass rusher whose speed is very impressive.  Hard hitter and a must see and watch for DB from Saint Brendan.