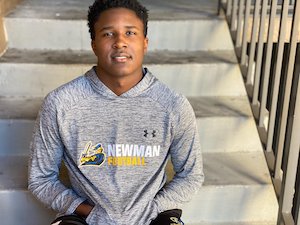 Three words that describe your play on the field: eliable, Aggressive and Leader

Best game of career: my best game of my sophomore year was against Belen Jesuit. I ran for 140 yards, had a 40 yard catch and 52 yard kick return with 1 touchdown. That was a 232 yard game for me.

Coaches that have influenced you:  my dad Coach Charvorris Roundtree, he has coached me since the age of 4. Coach Burack, Coach Wilts and Coach Jacoby Ford.

Stats/honors: This season i had a total of 620 All-purpose and 3 Touchdowns. On defensive I had 28 tackles and 13 pass break-ups and 1 int. I made the All-County Team

Pre game ritual: i like to listen to music. It’s a must I listen to Tee Grizzly- first day out. It really sets the tone to the type of game I want to play.