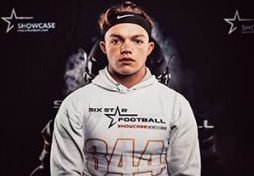 KANSAS CITY SHOWCASE: DL in the ’23 & ’24 that are making big names  – A ton of major talent showed up among ’23 class DL, some of those were players like Washburn Rural’s Bettis, a 6-3 long and lean big timer and 260 pound Cheadle of Center High in KC, a good example of of both speed and power that showed out at the 6Star Football Showcase in Olathe, Kansas.

Packson
Bettis
DE | 6'3" | 190
Washburn Rural | 2024, 6-3, 190, DE, 2024, Washburn Rural @pbettis40
A very lean and athletic looking DE that we think could become of one of the next big time defensive play makers for Washburn Rural, no doubt a team that has had some nice defensive standouts.  Already at 6-3, Bettis has that longer frame that could prove to be a major headache for OL to try and block off the edge and we look forward to see his unlimited potential to be a top notch up and coming prospect in the Topeka area.  Bettis has some impressive things going for him and don’t be surprised is he becomes one of the tops in his area.

Rodney
Cheadle
DL/DE | 6'0" | 260
Center | 2024, 6-0, 260, DL, 2024, Center @big_boo_cheadle
No doubt 6-0, 260 Rodney Cheadle is one of he big men in the trenches that Center will look to for some big toughness and aggressive play in the coming three seasons, a very impressive big man that is aggressive and tough. An excellent footwork and mover, Cheadle can get to the next level on many blocks, and does a great job of getting out in front of plays and making key blocks for his runners, no doubt an impressive looking 2024 OL and DL that can make it happen. 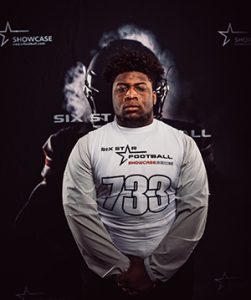 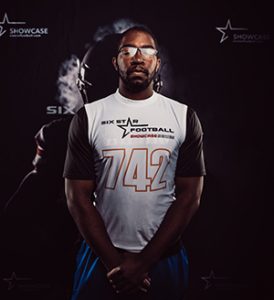 Elijah
Clarke-Boyd
DL/DE | 6'1" | 215
Junction City | 2023, 6-1, 215,  DL/DE, 2023, Junction City @Eclarkeboyd
A guy that has a very solid 6-1 inch and 215 pound frame from the DE spot for Junction City, no doubt with two big years left Clarke-Boyd will be looking for a huge junior year  and could be one of the class of 2023 play makers that really has a huge breakout year, a name to know in the Kansas class of 2023 and a player that is one with unlimited potential as well.  Good one climbing the ranks at Junction City.  Also a player that has gained a lot of power and strength and should be very tough to handle one on one for the upcoming 2021 season. 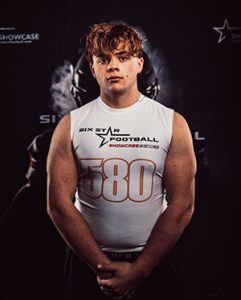 Ben
Evans
DL | 6'2 | 250
Hayden Catholic | 2023, 6-2, 250, DL/DE, 2023, Topeka Hayden @BenEvans2023
Size is there for big time career ahead and this big time super sophomore had 46 combined tackles with 14 solos, and 8.5 tackles for losses along with two sacks while being named an All City Hon Mention selection.   A player that was already thrown in the mix as a true freshman due to his athletic skills and skills as a big man up front, at 6-2, 240 as a true freshman Evans is starting what looks like a very good career at Hayden.  He benches 300 and squats 465 so a big time power guy already also.  Had 9 tackles and 3 sacks on varsity in 2019 and started on special teams as well while being a varsity backup on the DL.  Evans has a huge future ahead of him and is one big timer to know in Topeka. 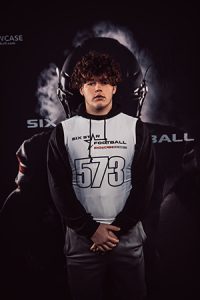 Kaleb
Green
OL | 6'1" | 215
Wellsville | 2023, 6’1,  215, DE/DL, 2023, Wellsville @kalebgreen58
Green makes the most of every pound on his 6-0, 215 pound frame and is pound for pound one of the most impressive and dominant men in the trenches you will find.  Only a class of ’23 Green is already playing like a veteran and was named the only sophomore OL for his league.  Named a 2A All State HM and a for sure hot one in the Kansas ‘23, and one of those guys that is really making a big time name for himself very fast. 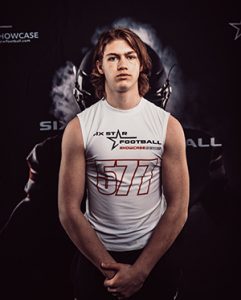 Hadley
Holmes
DL/DE | 6'1" | 185
Blue Valley West | 2024, 6’1, 185, DE/DL, 2024, Blue  Valley West @whats_upholmes
Holmes is one of the class of 2024 play makers for Blue Valley West that has a big upside, a younger player on a team that has had some impressive players in their class of ‘22 that will look to continue some power and speed in the trenches with upcoming prospects like the 6-1, 185 pound Holmes. A player that can make some things happen and a guy that may end up becoming one of the speed ends to keep an eye on for Blue Valley West. 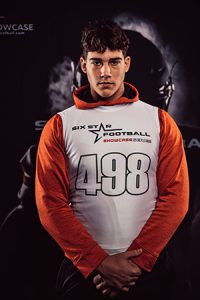 Ethan
Husmann
DL/DE | 6'3" | 230
Aurora | 2023, 6’3, 230, DL/DE, 2023, Aurora @EthanHusmann
Another extremely underrated prospect in Southwest Missouri who has good upside and power. He is a mobile prospect who can outrun opponents on the edge but also physical and aggressive and he is capable of blowing up plays both up the middle and from the outside. He is a well-built player who has good length and a balanced frame, capable of using leverage and his size to his advantage but also his speed and overall athleticism. A constant thorn for offensive lineman as he has an ability to get to the backfield and is constantly applying strong pressure to the pocket. 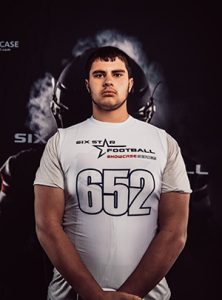 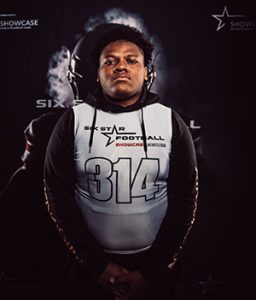 London
Lewis
DL/DE | 6'0" | 250
Rockhurst | 2023, 6’0, 250, DL/DE, 2023, Rockhurst @LondonLewis52
Lewis is a hard-nosed prospect who does a bit of everything on both sides of the ball seeing most of his time as a defensive tackle but can also make moves as an offensive guard. He is a strong prospect who has a lot of power and fight to his game. A versatile player who has good balance and can use his upper body strength to his advantage in a variety of situations. He is constantly pushing himself in the weight room and reports a 240 bench, 405 squat and a 415 deadlift. 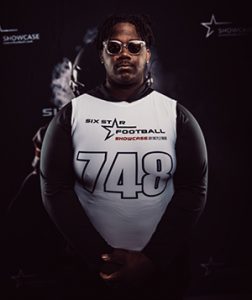 Lonnie
Reed
DL | 6'2 | 320
Bishop Miege | 2023, 6-2, 355, DL, 2023, Bishop Miege @Lonnie_R_99
You have to love the big men of Bishop Miege, so many next level college big men have come out of Miege in recent years, Reed has a huge frame that could be a dominant force up front at 6-2, 355 pounds, a player that can overpower guys and one of the juniors to be that will be a key big men for the Stags and one of those guys that we think could emerge into a nice big man in the KC OL watch list. 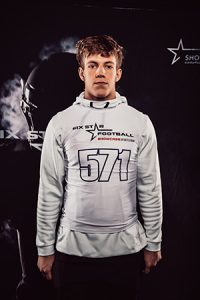 Jacob
Stockard
DL/DE | 6'4" | 218
Liberty North | 2023, 6’4, 218, DL/DE, 2023, Liberty North @JacobStockard
A player who brings a nice combination of size and power to the field. He has good hands and can push opponents back and is all so capable of operating as a tight end, due to his blocking ability and underrated ability to move things as a ball carrier. He has shown improvement over the years and is expected to take his game up a notch. A tough-minded, hard-nosed prospect has seen improvement and continues to showcase his athleticism and overall strength. 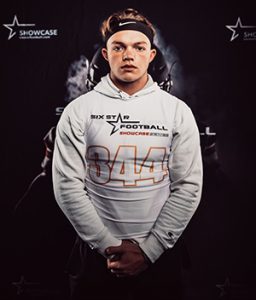 Caden
Wiest
DE | 6'3 | 240
Reeds Spring | 2023, 6’3, 240, DL/DE, 2023 Reeds Spring @cadenwiest
Wiest is a prospect to a scene action on both sides of the field. He has a big frame and strong quickness off the line, capable of handling himself in one-on-one situations and is likely to come out ahead. He has good hands and good footwork and is a multiple sport standout with a lot of speed and unteachable intangibles as a prospect. Also an offensive threat over the top who can get up and pull down passes with ease and he has the strength to pull down ball carriers and QBs as well. A big stock riser and a physical prospect on the move. He currently holds an offer from Missouri State University. 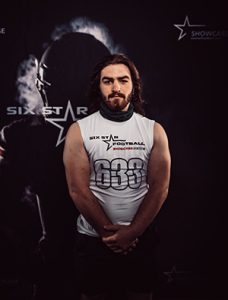 William
Young
DL/DE | 5'10" | 215
Lawrence Free State | 2023, 5-10,215, DL/DE,  2023, Free State @Steamboat_64
One of the hardest playing young defensive lineman in the state, Young gets after it and is a powerful and punishing hitter. Young with two big years left is a player that can both cover the field from side line to line and make plays on both the outside and the middle. A run stuffer that can make huge plays and a guy that’s good at blowing up plays against the run.