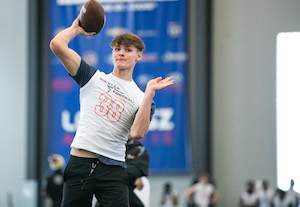 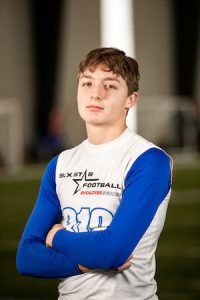 @allebachhenry
A nice young prospect who already has good size, good experience and the ability to mislead defensive backs and then beat them over the top. He has a strong arm and good instincts and is able to make big throws leading the receiver into the end zone. Allebach has good confidence in his game and is able to stay in the pocket and work through his progressions and find receivers just as they are creating separation. Has good vision and can scan the field quickly and is also very coachable. 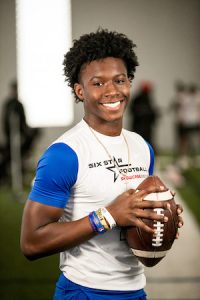 @cartdogBoyd
A talented prospect who shows very good timing and touch, Boyd is a strong stock riser who shows good potential in his overall game. He is very fluid and is able to make terrific throws on the move and in the pocket. He has a clean release and is consistently making the right decision when facing pressure. He can scramble and create and even make some off-balance throws but is also comfortable with making plays in the pocket. A player with some upside and strong technique who is already showing mobility, timing and very good footwork in the pocket. 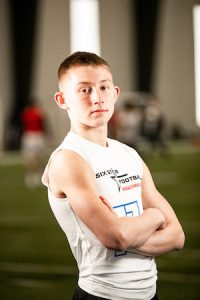 @Edelstein_7
A smart and athletic player who can see time on both sides of the ball. He has good arm strength and adds good mobility and can make plays both inside and outside of the pocket. He pushes himself hard and is constantly working and constantly improving. He can lead his receivers down the field and has a lot of power to his throws. He steps up in the pocket and can get distance to his throws while in motion as well. A player who has some potential in his game given his athleticism, work ethic and ability to make things happen on his own.

@Jake_Curry2
A strong, mobile and also an underrated QB option who is able to find receivers along the sideline when it looks like there’s no room for them to complete a play. Curry has some real playmaking ability, he sees the field and is able to make throws before defenders make contact. He can step up in the pocket but also make throws on the run and put the ball in a smart place. Has a strong arm for his size and can air things out on big plays with what appears to be very little effort on his part. He constantly throws tight spirals both on the move and away from his body and when he is able to plant his feet and step into his throws. An underrated player overall. 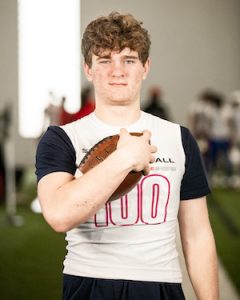 @GrantParkerGib1
Gibson is a strong player on the rise who has a big frame in the ability to create some both on the ground and as a passer. He is listed at 63, 215-pounds and he can see the field and make some plays in motion. He has tested high in combine events in the past and shows good consistency with the ball in his hands. He is improving his accuracy overall and shows natural athleticism, good strength and some quickness as well. This last season he averaged 6.4 yards per carry on 75 attempts and 482 total yards with seven rushing touchdowns. He threw for 669 yards and had six passing touchdowns as well. 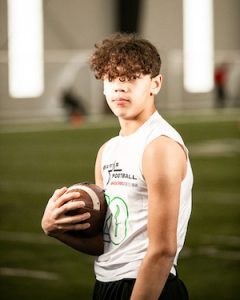 @KelleyZaiden
A good athlete who has some speed and athleticism. He is listed at 5’9, 145-pounds and is able to get the ball off in motion. He has good arm strength for his frame and is able to create and make moves on the ground. He has been able to make throws on the move and he is at his best throwing when he is playing with confidence and stepping into his throws. 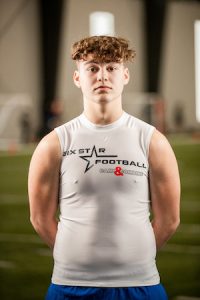 @DominicLeesman
A three sport athlete who is constantly involved and shows good potential and overall accuracy. He has a lot of confidence in his ability and is able to set his feet and then make some tough throws when it looks like his receiver is fully covered. He likes to hit receivers outside the numbers but is able to work through his progression some and he does a good job of getting the ball out of his hands as quickly as he can. He has some creativity and can scramble and buy time and has a good feel and good hip movement and a clean release. 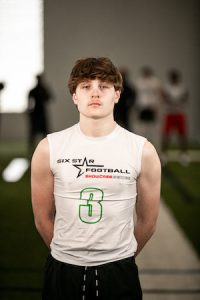 @c__martin7
A talented player who has good speed and the ability to use his athleticism as an advantage. He can make throws in the pocket and when he’s forced out of the pocket and is good at hitting his Target and evading contact. He shows some dual threat ability, can create with the ball in his hands and is good at using his linemen and forcing his way down the field. He can make throws both inside and outside the numbers and has shown some improvement on his deep balls and footwork in the pocket. 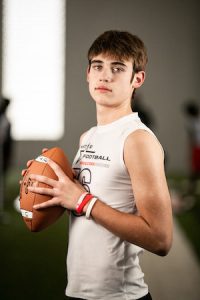 @tillmanmartin10
An active player who has good size and good hands. He is listed at 6’2, 170-pounds and he has some mobility to his game as well. He has good experience at his position for his age and can make plays from the pocket and he can push the ball down the field. Martin has good vision and can see things happen and anticipate defenders and put the ball in a good place. He shows good mobility and can even make some off-balance passes that are easy for his receivers to come down with.

@Nick_Miller_2
A versatile athlete who is able to see time as both a QB and as a DB. He has increased his size, standing at 5’10, 160-pounds and adds good strength and speed. He has a solid arm and is able to find receivers with the ball. Has good mobility, can get out and has the ability to make throws on the move. Miller is a tough player and shows some scrappiness and ability to track the ball, make tackles in space on defense and can hit his target as a passer and shows some ability as a QB. 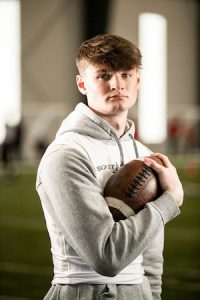 @GavinOliver16
A tall athlete who is able to make plays both with his feet and his arm. Oliver is listed at 6’4, 190-pounds and he is able to see the field well and can time his throws well with new receivers fairly quickly. A solid player who does a good job of working through his progressions and is able to find receivers both in the backfield and on quick routes in the red zone. Oliver throws a catchable ball and can even lead his receivers down the field or across the middle on crossing patterns. An improved player who is putting a lot of work in and is showing good mechanics and a solid IQ for the position.

@BradyVanDonge
A talented, multiple sport prospect who has good touch and the ability to find receivers inside the numbers. He has a strong arm and good overall ball placement and can put the ball wherever he needs to with his receivers in traffic. He has a high release point and good mechanics overall and is able to get the ball out in rhythm to his receivers or tight ends. He works through his progressions well but can hit receivers before pass rushers have time to make a move. He can find receivers outside the numbers but is good at spotting openings across centerfield. He reports a 31-in vertical and also is a standout in the classroom with a 4.0 GPA.