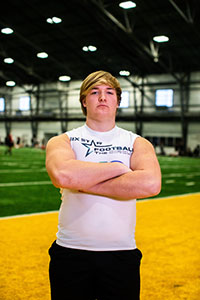 @JosephBittner19
One of the top DL that really raised his profile at the 6Star Football Showcase in St. Joseph was this Treynor High standout, Bittner, 6-0, 240 pounds, tied for the third best 40 yard dash time among DL at the event with a time of 5.30 and also turned in a solid broad jump mark of 91 inches, among the better marks for DL at the event. One of the big men from Iowa that impressed us and is a 6-0, 240 tough and physical defensive lineman that plays smart football and can clog up the line on the Nose as a tough and physical play maker, brings that wrestling background that he has to the field as a key guy that can use his leverage and power well. Very powerful and tough, plays with a lot of emotion on the line.  Bittner had 21+ tackles (10 solo) and 4+ sacks with 10 tackles for losses as a key veteran on the D-Line for Treynor. 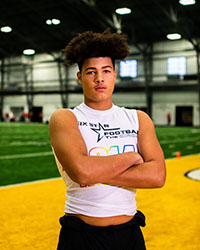 @TrevonCreager
Creager was a top looking freshman at the 6Star Football Showcase in St. Joseph, one of the top “raise your profile” ‘26s at the event, the up and coming future standout from Washburn Rural had the fifth best vertical among the DL in attendance with a mark of 25.7 inches. One of those guys that is an up and coming freshman player on the rise from Washburn Rural, Creager has some length at 6-2, 220 also and is one of those guys that can play either DL or DE and is a player that is a very physical player and takes on blocks well as a tough and impressive looking edge player and tough man to run against. 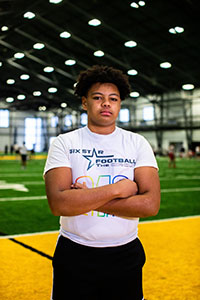 @DevynDavis91
A big man and two way player that is just a freshman and will look to be in that next big wave of lineman for the Stags that will be a tough in the trenches player, really does a nice job of blocking also on the offensive line, a leg driver that is powerful in his lower body and can move the pile, could be one of those big physical players of the future to keep an eye on.  A player that did see some varsity action as a freshman on this top tier Kansas Bishop Miege team, Davis had a handful of varsity tackles for 2022 and showed in freshman action he is an up and coming name to know with 1 forced fumble, 8 sacks, 28 tackles all in his 9 games of action for the Stags defense. 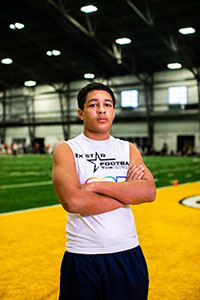 @DRHedrington73
Hedrington was one of the top looking young athletes at the 6Star Football Showcase in St. Joseph, not many freshman looked more impressive that this Atlantic High DL prospect who had one of the top vertical’s in his class at the event, a 24.6 inch vertical and just a freshman. A player in Iowa football to know that is coming up and a talent to know that is a two way lineman, Donovan Hedrington OL(Center)/DL/LB from the class of 2026. Hedrington, a team captain/ AAU State Wrestling Qualifier for five years and an AAU Track (4×1) Middle School Basketball/Wrestling/Track star is one of the high on the radar athletes that could really excel at several of his positions, one of those being center on the offensive line. He is one of the quickest and most aggressive at the point of attack players in the 2026 class. Hedrington is the center of the offense so he must know all the different alignments. On defense he is more of a natural fit because of his speed and quickness and has a high football IQ. 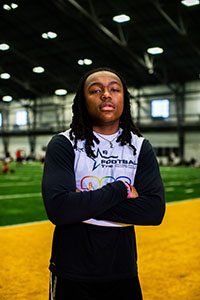 @Jalen_Johnson55
Johnson really raised his profile in a big time way at the 6Star Football Showcase in St. Joseph and could have been the top freshman performer at the event. Johnson was tops among all DL in the broad jump with a distance of 107 inches. Jalen had the best overall time in the 40 yard dash among all DL in attendance, as the freshman ran a 4.90 mark to impress. Jalen was second among all DL with a vertical of 29.5 inches, one of those young players that has really been making a name for himself with these types of performances as a freshman to take notice of. Kansas City area’s Olathe West freshman Jalen Johnson is a 6-1, 260 defensive tackle making the radar as a name to know that will be looking to use his size to be a good one in the coming years for the program at West. Johnson is a big man that can move in space well and can make some rangy plays against the running games that most DL his age can’t, looking like a promising young player on the rise to watch out for. Also a standout student, Johnson reports a 3.75 GPA. 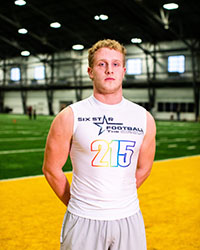 @trentpatton10
One of the big men that impressed us the most at the 6Star Football Showcase was this DL prospect from Iowa, Glenwood’s junior Trent Patton. Patton turned in the second best 40 yard dash time among DL at the Showcase, a number that impressed at 5.16. Patton also had top performances in the broad jump with a 100 inch mark and a vertical of 28.1 inches, ranking him third best vertical among DL in attendance. A very impressive Iowa junior and DL that was named a 1st Team All-District DE this season for Glenwood High School in Iowa, a player that uses his length well, 6-3, 220 and a play maker and pass rusher coming off the edge that is one of the better looking juniors in Iowa football coming off the edge as a major attacker and player that is hard to make a good block against.  A big year for Patton who finished with 43 tackles, 29 solo tackles, 4.5 sacks, 12 tackles for losses, and had two fumble recoveries. 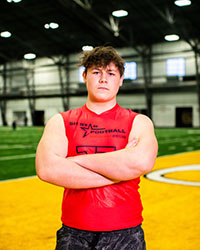 @EliRiva12
A very hard worker in the weight room and one of those guys that can really be a powerful lineman to watch out for, Riva is looking to be a big power player in the trenches at Elkhorn South and can bring a lot of toughness to the Nose Guard position as a player that will be looking to make more and more impacts on the defensive front line against the running game. This up and coming standout showed a lot of potential and is one of the risers in Nebraska that could be in for a big season in 2023. 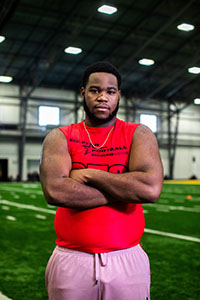 @RonnieR18405559
Big man in the trenches that brings some toughness and physical play to the lineup at Schlagle and is one of those guys that can be powerful with his 6-3 frame and at 285 has both some length and power in the trenches. A junior looking to show out as a senior and player that will be a Kansas City area player to have on the radar. Had 62 tackles for second most on the team, eight tackles for losses, and a sack for the Stallions defense. 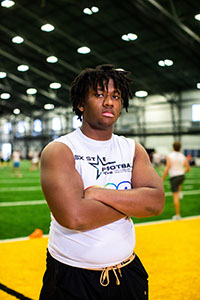 @JadenSelmon
One of the senior Defensive lineman that had a good season for Washington High School, Selmon is 5-10, 217 pounds and a player that was very tough for his size, Selmon earned All_Meadowlark Conference honors for the second straight season, earned All-State Honorable Mention Honors, was a three years starter and a team captain. Selmon also was a First Team All-Conference selection for his senior season and has been a huge impact maker for the Washington defensive unit.  Had 26 tackles, 10 tackles for losses and a sack. 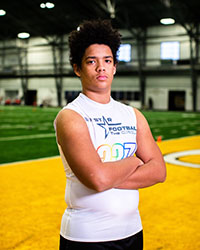 @BTaylor1_
A very solid built and tough and physical player in the trenches that can play some Nose Guard and offensive tackle for Lincoln Southeast High School in Nebraska. Taylor will be looking for more and more action as a junior on the rise in 2023. A player that has the toughness and physical style of play to be in the middle of the action.

@kainen_white
White was named a finalist for 4A defensive player of the year and was one of the more impressive Eastern Kansas pass rushers in the junior class this season.  Big man 6-1, 272 two way lineman and impressive junior pass rusher Kainen White is one of the top looking big men in the junior class in Kansas football and has the power and toughness to back it up on the football field. White earned All-State HM honors last season and had another big season in the trenches in 2022 with six sacks as a power pass rusher that uses his hands well and can be violent in the trenches as a key pressure play maker and run stopper. 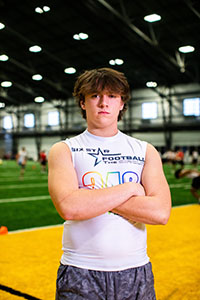 @TrevorWidener_
A very impressive riser and one of the DL that raised his stock at the 6Star Football Showcase in St. Joseph, Widener had one of the most impressive looking broad jumps among DLs in attendance with a mark of 90 inches. A player on the rise and expected future key impact maker for the defense at Olathe East. A very tough and physical lineman and sophomore coming up from Olathe East, had a crucial fumble recovery in the Hawks 34-33 big victory over Shawnee Mission NW this season and is one of those defensive players that will look to be right in the middle of a lot of future action for the Hawks defense. 6-1, 225 and a DL name to know in the coming season at Olathe East. 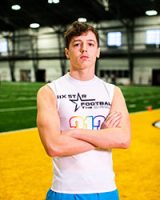