MIDWEST SHOWCASE COVERAGE | Senior OL prospects impress (2023)– We look at the standout performers among DE and DL and that shined at the Midwest Showcase in St. Joseph and raised their profiles on December 11th. 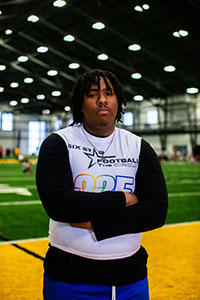 He has been one of the toughest competitors at showcase events over the past calendar year as Bailey was a standout performer last spring at the KC Varsity Combines, and again on Sunday where he impressed at the Midwest Showcase at Missouri Western. He plays the game with huge passion and a competitive edge, working hard against opposing linemen and using a combination of explosiveness, strength and technical skill. Bailey recently picked up offers from Culver-Stockton, Bethel and Graceland as well as a PWO from Lincoln, and took a game day visit to Missouri Western in October. 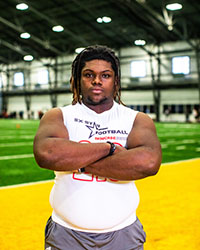 He recorded a solid 5.90 laser timed 40-yard dash, 87 inch broad jump and 22 inch vertical at the Midwest Showcase and was a strong performer in individual drills and competition. Conley is a strong, and physical defensive tackle prospect who plays the game with an edge. He has a strong, physical base at 6’0, 270-pounds and keeps a low center of gravity.

A strong, physical interior defensive lineman, Grandview 2023 Dakota Coker-Akinmoladun (6’0, 297) is a physical presence in the interior of the Bulldogs’ defensive line and showed the ability to demand a double team and make plays. Coker-Akinmoladun is especially tough against the run where he can stand up opposing linemen and make plays on the ball. He recently picked up an offer from Missouri Valley. 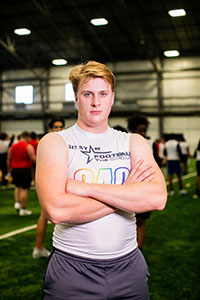 One of the state’s top uncommitted defensive prospects, Parkway West 2023 Parker Cummins has seen his recruitment pick up in recent weeks following a strong senior season. He impressed at Missouri Western with his quickness off the edge and excelled in 1v1s against strong competition. He recorded 90 total tackles this season for the Longhorns, just one shy of leading the team, and added three sacks and three forced fumbles. He has a big motor, is strong and physical and plays the game with an edge. He was a strong, powerful force at MLB this season as he commanded the middle of the field, but he can also play DE and was a first team All-Suburban Athletic Conference selection for his work as an offensive tackle. He recorded a 4.9 40-yard dash, 9-0 broad jump, and 26 vertical. Also a standout student, Cummins reports a 3.66 GPA and 1320 SAT. He earned a Division II offer from William Jewell in November and recently took an official visit to the school. He also holds an offer from McKendree.

Also a basketball standout for William Chrisman, 2023 Sayvon Lankford is a talented prospect with good size and an athletic frame that could add good size with age. At 6’3, 205-pounds, Lankford was a strong edge rusher this past season and showed the ability to play some tight end this season as well. Lankford holds offers from Peru State, Graceland and Anna Maria College. He recently took visits to Peru State, Ottawa and Graceland. 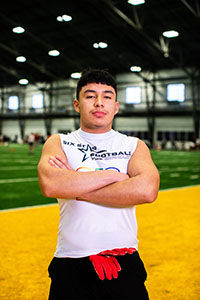 Springfield Central 2023 Roger Mendez (5-11, 220) plays much bigger than his listed height and weight this past season, showcasing a big motor off the edge and terrific playmaking skills. He finished his senior season with 83 total tackles, 13.5 tackles for loss and four sacks. He was an All-Independent defensive lineman for his efforts and showed the ability to get off the snap and rusher the passer and make plays in the backfield. 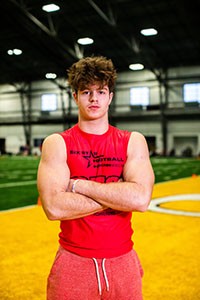 St. Pius X 2023 Alex Moisis was one of the top performers among defensive linemen during the combine portion of the Midwest Showcase on Dec. 11 at Missouri Western as he recorded a laser timed 5.16 40-yard dash, 105 inch broad jump and 34 inch vertical, all among the best marks at the event for his position group. Meiosis is coming off a strong performance for St. Pius X this season as he recorded 16.5 sacks as a senior, including a five sack performance against Herculaneum. He was named the I-55 Conference Defensive Player of the Year. 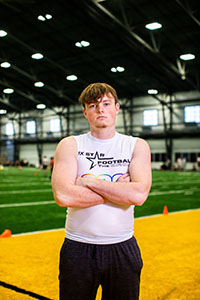 A three-sport athlete, Lawson 2023 Gavon Thummel was a KCI All-Conference performer this season he showed the ability to get off blocks and makes plays in the opponent’s backfield. He can also play tight end and linebacker and has good size at 6’2, 210-pounds. He reports a 320 squat, 345 bench, 235 clean and 410 deadlift.