MIDWEST SHOWCASE COVERAGE | Senior OL prospects impress (2023)– We look at the standout performers among senior QB prospects that shined at the Midwest Showcase in St. Joseph and raised their profiles on December 11th. 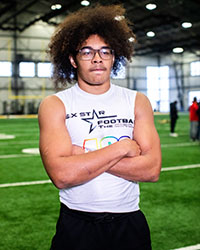 Raytown South 2023 QB Manny Burnett was a selection to TheFINALS All-America Showcase last May and returned to a Six Star event on Dec. 11 at Missouri Western and didn’t disappoint, putting together a strong combine performance as well as showing off a strong arm and all-around skills. He recorded a 105 inch broad jump and 29 inch vertical in the combine portion of the event, recording some of the top marks among QBs in each. He is a smooth, fluid athlete with a strong arm and a high football IQ. Burnett has 74 ¼ inch wing span, 9 ⅓ inch hands and at 6’0, 190-pounds, has good size as well. Burnett threw for 1,840 yards and 18 TDs and rushed for 377 yards and six TDs and was named first-team all-district. He has drawn five offers, including Quincy, Lincoln, MidAmerica Nazarene, Graceland, and Carthage.

One of Missouri’s biggest sleepers in the 2023 class, Albany senior Kemper Cline impressed at the Midwest Showcase with a combination of size, athleticism and all-around skill. He impressed in the combine showing as he recorded a 4.90 laser timed 40-yard dash along with 108 inch broad jump and 29 inch vertical. At 6’5, 220-pounds, he has terrific size and an athletic frame with potential to add good muscle mass with age and continued work in the weight room. He is coming off a senior season at Albany that saw him throw for 1,281 yards and 25 TDs, rushed for 1,200 yards and 9 TDs and made 47 tackles, six for loss and three INTs on defense. Cline has drawn offers from Missouri Western, Graceland, Upper Iowa, Chadron State, Benedictine, and Culver-Stockton, and has drawn interest from several other programs as well. 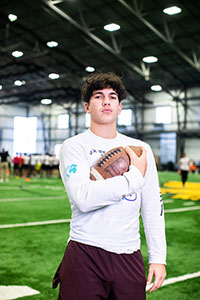 Grandview 2023 QB Joseph Lepak has flown under the radar as a prospect in the Kansas City area despite recording 37 TDs as a junior and 20 as a senior. He has a smooth throwing motion, strong arm and is dangerous outside the pocket with his ability to throw on the run or tuck it and go. A standout all-around athlete, Lepak recorded a 29 inch vertical during the combine portion of the Midwest Showcase in St. Joseph. He has drawn offers from Missouri Valley and Central Methodist and interest from several other programs. Also a standout student, Lepak reports a 3.7 GPA. 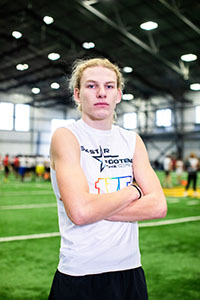 Also a standout basketball player, St. Joseph Central 2023 QB Stone Wetlaufer impressed in his hometown at the Midwest Showcase at Missouri Western. A smooth, fluid athlete, Wetlaufer has good agility and flexibility and has the ability to avoid oncoming pressure in the pocket. He can deliver the ball downfield, has strong mechanics and can deliver the ball downfield while on the run.  He impressed last offseason with Epic7 Midwest on the 7v7 circuit and saw his work carry over to his senior season,. He has drawn some college interest, including Missouri Western, Ball State and others.