MIDWEST SHOWCASE COVERAGE | Senior OL prospects impress (2023)– We look at the standout performers among TEs and that shined at the Midwest Showcase in St. Joseph and raised their profiles on December 11th. 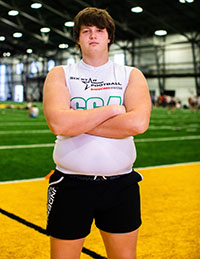 Kickapoo’s Benton Brown had an under the radar type season for the Chiefs. Brown started at right tackle and was a force in the run game. He is light on his feet and gets off the ball quickly. He shined at the Midwest Showcase on Sunday and drew an offer from Peru State following the event. He reports a  230 bench,450 pound squat, 495 deadlift and 245 clean. He also holds offers from Central Methodist and Ottawa. 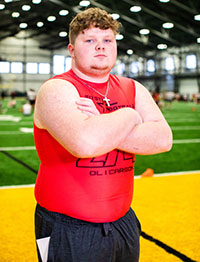 Carson had a standout 2022 season for the Nixa Eagles. He helped lead an offense that rushed for nearly 250 yards per game and throw for 200 yards per game. He spent a majority of the season at right tackle for the Eagles and proved to be a problem. He is solid in pass protection and in the run game, and showed off his talents in Kansas City at the Midwest Showcase and was one of 12 seniors recognized for their performance in session I. His motor stands out on tape and has picked up an offer from Westminster following the Midwest Showcase, adding to a list that includes Finlandia University, Mid America Nazarene, Ottawa and others. 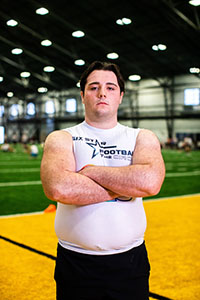 Hagler might not have the height as other offensive lineman, but don’t let that fool you, the kid can play some football. He has a high motor and plays the game to the whistle and shows the kind of nasty streak as a blocker that is necessary to compete at the highest levels. He had a solid season for first-year coach Anthony Hays and earned first team all-district and third-team all-state honors in the process. He competed well and recorded a solid 5.75 laser timed 40-yard dash, 83 inch broad jump and 24 inch vertical at the Midwest Showcase and reports a 3.74 GPA and 430 pound squat and 285 pound bench. He recently received offers from Ottawa and Westminster and is drawing interest from several others. 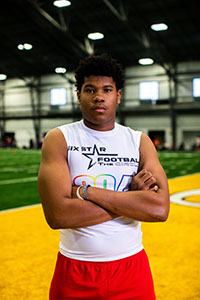 A two-way standout who also impressed with his work on the Raytown South defensive line this past season, 2023 Cortez Newman recently picked up his first offer from Graceland on Dec. 5. He plays the game with terrific physicality and shined all over the offensive line for Raytown South, showing the ability to pull down the line at guard, move his feet in pass protection and played through the whistle. 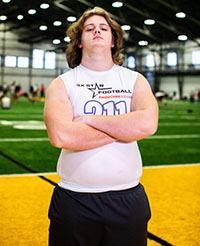 A versatile offensive lineman prospect, Rifle has shown strong skill at either offensive guard or tackle and at 6’2, 265-pounds, has good size and an athletic frame that projects well. He recorded a solid 5.70 laser timed 40-yard dash, 88 inch broad jump and 25 inch vertical at the Midwest Showcase and was a strong performer in individual drills and competition. His film shows a player that is excellent in pass pro and athletic enough to get to the second level as a blocker, especially on screen plays. 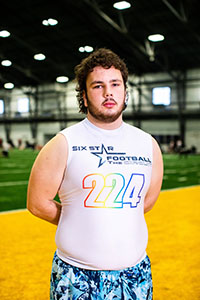 A standout at the Midwest Showcase, Burch is an athletic prospect with strong upside. He is strong in pass pro on the edge where he shows good feet and quickness. Burch has good quickness, a big wing span and is growing both physically, and with his performance. He was an honorable mention all-conference selection for his performance this season. He is a name to keep an eye out for as a college coach in the late signing period. He received an offer from Westminster following the Midwest Showcase.