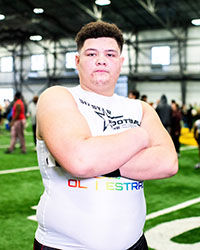 @JesusEs64559514
Big man that looked impressive at the 6Star Football Showcase in St. Joseph, a powerful player that does a good job of using his hands and looked like one of the names to know among junior OL. 6-2, 295 Jesus Estrada from Omaha South is a big man that has the size and power to be a player that jumps onto more and more college radars and will be looking to show out again in 2023 with a big senior season in the trenches, the South big man is a player that has some height also which should help his recruitment at 6-2 inches tall, Estrada will look to use more and more of his leverage and add power to his game to become one of the ’24s on more and more radars. 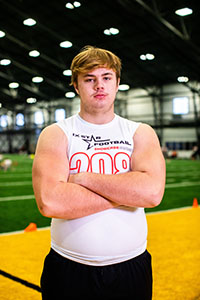 @Bradenhales
A First Team All-State selection, this big man that was one of the top talents at the 6Star Football Showcase in St. Joseph, Hales impressed in every area, had a standout performance in the broad jump with a 92 inch jump good for a tie for third best among OL at the event. Hales also tied for fourth best vertical among OL with a 24.9 inch mark. Hales also was a top 10 OL in the 40 yard dash with a time of 5.99 laser timed. When looking at the big men with the best talent, Hales is a guy that keeps rising to the top of that talent list, really looking forward to seeing him one more year to see how big he blows up as a big man college recruit, has the size and power to be a very impressive hot prospect to know. There is a very talented junior class of offensive lineman in the Kansas City metro West area and one of the top tier must see big men is 6-4, 285 Braden Hales, we also have seen him during the offseason at the FINALS where he was one of the most dominant big men among some of the elite talents from across the Midwest and really showed good movement and work with his hands. A player that uses his length well to be one of those in your face smash mouth football players that can make big blocks happen on a regular basis.  Also a standout student, Hales reports a 3.8 GPA. 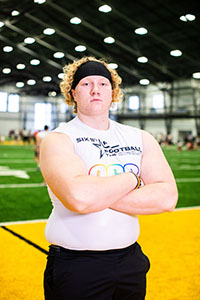 @CooperJay20
One of the big men that is a stock riser and raised his profile at the 6Star Football Showcase in St. Joseph, Jay was a top 10 OL in the 40 yard dash with a time of 6.10 and turned in a broad jump of 81 inches. A big man to watch for at Augusta that is one the rise as a ‘24 big man to know in Kansas football. More and more college looks and interest from a big man that we like a lot both for his power and size and talent on the Augusta line, junior big man on the rise to know and 6-4, 290 well sized Cooper Jay has gotten some early interest from Bethel and more and more college programs should start the looking at a big man that reports a 305 bench, 275 clean and a 475 squat. Jay is getting more and more college looks and interest, among those schools that are looking early are Bethel.  Also a standout student, Jay reports a 4.0 GPA. 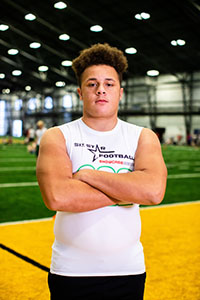 @1_Braylon_1
One of the big men standouts at the 6Star Football Showcase and a player that earned an FINALS invite, this Iowa standout had the third best vertical among OL in attendance with a mark of 26 inches and tied for third best broad jump with a 92 inch jump. Was great to have some big time Iowa talent at the Showcase and Jenkins really has the makings of being a name to know among big men from the state, from Valley High School, one thing that is great about Jenkins is his size, 6-5, 275 and can still show a nice combo of both some power and keep his speed on both sides of the line, this DL/OL two way player, is a player that is one of the future emerging stars of Iowa football in the ’24 junior class.  Earned Third Team  All-State honors this season as a standout lineman for Valley High.  Also a standout student, Jenkins reports a 3.86 GPA. 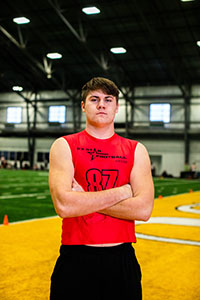 @KaedinMassey
Massey was a standout and elite performer, you can tell this guy is D1 material from his frame to his footwork, a great core built and size, Massey had the top vertical among all offensive lineman at the 6Star Football Showcase with 30.9 inches and is a player we look forward to seeing at the FINALS event with this big talent. Massey also had a 104 inch broad jump which was the tops among all offensive lineman at the Showcase also. Huge talent and D1 recruit, made a recent visit to Mizzou, one of those guys making more and more major college radars with his size and power in the trenches, a 6-8 towering big man on the line to watch out for. A two way talent Massey is being recruited more as an offensive line prospect and towers over the competition as a 6-8, 255 huge blocker with range and wing span that is hard to handle, Massey also was a major talent as a big man on the pass rush this season and had four sacks while playing in the defensive trenches for the Lyndon D-Line. Offers from Nebraska, K-State, Kansas, and Iowa State.  Also a standout student, Massey reports a 4.0 GPA. 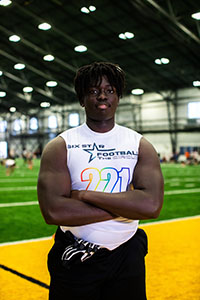 @Williamkon74
Mon has good size and is a player that raised his profile with a very good showing at the 6Star Football Showcase, Mon was a top big man at the Showcase and had the fifth fastest 40 yard dash time among OL in attendance with a 5.80 mark. Big man that can make some impressive things happen to know that is a riser on the radar. A very impressive looking size guy at 6-3, 270, Mon is a big man that has the frame to be a power blocker, 6-3, 270, one of those players and big man that has the size and length to be an impressive big man and has looked very good in one on one matchups this season, a name to know and a big man that can make some big blocks in the trenches. 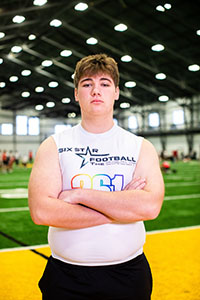 @MasonSanden
One of the players that raised his profile and showed he is a very impressive looking up and coming sophomore was Omaha Central’s Mason Sanden. Sanden tied for the second fastest 40 yard dash time among OL with a time of 5.70 and had a 22.3 inch vertical also. A lot of pure power for this Omaha Central big man, Mason Sanden is a 6-3, 285 center and Nose Guard, is there is tough and physical action in the middle of the line that’s where this work horse and powerful big man wants to be. A name to know on a line that has a lot of big man and big recruits making up that line. Sanden is a strong big man and weight lifter with a lot of pure strength. 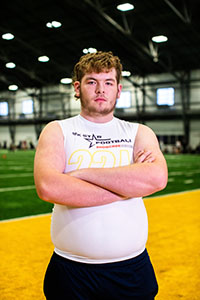 @BrockSullivan17
The big man really raised his profile at the 6Star Football Showcase, the biggest man there for length and size, Sullivan showed impressive hand work and also earned an invite to the FINALS from 6Star Football. Big #78 keeps pounding on guys and using his huge frame at left tackle to dominate guys and at 6-9, 305 pounds Sullivan holds the size advantage on all of his matchups on the edge, a player that can be hose big passes happen under pressure.  Also a standout student, Brock reports a 3.8 GPA. 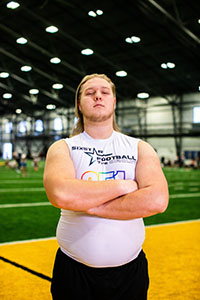 @XavierVB2024
Tough and physical, a player and big man that looked like a standout and is a junior that raised his profile and showed he is a big man name to know in Nebraska’s junior class. 6-3, 285 big man and a power player that uses his hands and his size well to be a stop you in your tracks lineman from Lincoln North Star, Von Busch is a very impressive looking junior on the rise and a big man we could see getting several offers as a senior talent, good length and power, Xavier has many college programs looking at his impressive game, among those are Wayne State and Augustana looking for big men and liking this talented student athlete who reports a 4.2 GPA in the classroom as well.  Also a standout student, Von Busch reports a 4.2 GPA. 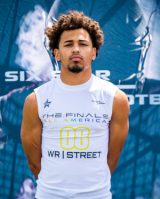 ★INSIDER: Senior Watch list prospects to know on the radar